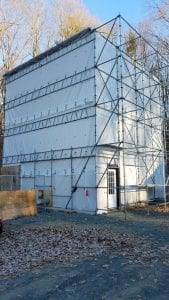 WESTFIELD – Mayor Donald F. Humason Jr. and staff from the public works, water department and finance committee presented a $12,257,000 bond request to the City Council on March 18 for the construction of a permanent Granular Activated Carbon (GAC) treatment facility for Wells 1 and 2, to replace the temporary facility currently treating Well 2.

The bond was referred to the finance subcommittee meeting on March 30.

Humason said Westfield has recently been awarded special financing from a state revolving fund (SRF) at a zero percent financing rate, with some loan forgiveness, for the construction of the facility. He said there is a short timetable in which the city must bond in the amount of the awarded funding, or the opportunity will be lost, adding that the city had applied for the funding in August 2020, and was notified in February 2021 of conditional approval. “The bond must be approved by the city council no later than the June 30 deadline,” he said.

Reviewing the history of funding, Humason said in 2018 the city council authorized a bond that included design and construction of Wells 1 and 2, however due to project costs, additional funding is needed. He said not all of the previously authorized bond was utilized, and while there may be some costs that still need to be paid out, any unborrowed monies will be rescinded at the conclusion of the project.

“Because the SRF financing is much more favorable, it makes sense to utilize those monies in lieu of the current bond. The success of Wells 7 & 8 should serve as an example of how Granular Activated Carbon filtration is working just as it was designed, and is delivering water to the residents that is meeting all the regulations and testing requirements promulgated by the Massachusetts Department of Environmental Protection,” Humason said.

Stayton said this year PFAS treatment funding has been made a priority by the SRF loan program with zero percent financing and up to 20 percent principal forgiveness. She said the draft intended use plan was released in February, and expects the SRF intended use plan to be released “any day.” She said the Water Department is diligently pursuing every opportunity to go after grants and awards for water treatment. In the fall, they received a $200,000 PFAS design grant award, and learned on Tuesday they were awarded another grant of $180,495 in the second round of the program.

Tefft gave an overview of the two bonds approved, totaling $18 million, previously authorized by the council for water treatment. She said their main focus was the construction of a permanent water treatment plan for Wells 7 and 8 on Owen District Road. Tefft said a temporary treatment plant was built for Well 2, as well as design and construction of the East Mountain Water Tank and ongoing tank rehabilitation. Tefft said $5 million of the bond was not spent, and will not be spent. She said due to inflation and a more competitive bidding environment for PFAS water treatment projects, the terms of the SRF are more favorable.

Barnes said with the help of Tighe & Bond the city performed a loan cost comparison between a conventional loan and the SRF funding, and found a $5 million savings, largely due to zero percent interest and 19.8 percent loan forgiveness.

Stayton added that the SRF schedule is tightly controlled, and the critical piece of bond authorization by the Council has to be completed before June 30, or the “SRF money goes away.”

“The sooner we get this into bidding, the closer we’ll be ahead of the surge for demand. All communities will now be testing for PFAS, and demand will only increase,” Stayton said.

Cain went into some details on the water treatment plant’s operations. He said the temporary GAC filtration at Well 2 was always intended to be installed and repurposed at the Dry Bridge Road permanent facility once built, adding that since it began operation over 320 million gallons of water has been treated successfully without any carbon change. He also said DEP approval for the temporary facility has expired, and new temporary approval must include plans for a permanent structure.

At the start of the presentation, Finance Committee Chair Ralph J. Figy said all questions from city councilors would be deferred to the discussion at the finance meeting on March 30, and asked that all questions be sent to him by March 23.

“I know you all understand how important this project is for the City of Westfield. I respectfully request your thoughtful consideration of the information presented to you tonight, and your approval of the bond request to allow us to take advantage of the SRF funding,” Humason said.