I was sad to hear that Dick Hoyt died last week. The former Westfield resident was half of the father-son duo famous for participating in marathons and triathlons. In case you don’t know, Dick was the dad of the duo and Rick is the son. And in case you really don’t know, Rick was born with cerebral palsy and is a quadriplegic.

The pair were a worldwide inspiration. Most of you know their story — in 1977 Rick asked Dick if they could participate in a 5k here in their hometown of Westfield. Dick pushed Rick in his wheelchair and after they completed the race, Rick told his father he didn’t feel disabled when they were racing.

That was all the inspiration Dick, a member of the 104th Fighter Wing at the time, needed. 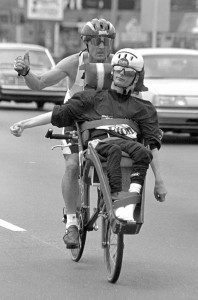 That was 1977 and I was five years-old. I had no idea who the Hoyts were but several years later I did when my aunt befriended Ricky at Westfield High School and would help him navigate the halls and cafeteria.

The father-son duo became famous for their participation in the Boston marathon and numerous other races and triathlons over the years.

I watched, inspired, along with the rest of the world, as two men from my hometown showed the world that a disability was not an obstacle to achieving your goals.

Several years ago, Ricky befriended me on Facebook and we have kept in touch. I have seen his accomplishments, made with his family by his side, or in Dick’s case, encouraging his son and literally pushing him to achieve his goals.

When I became a parent and my child was diagnosed with autism, I admit I felt a little bit defeated at first. I wasn’t sure the future I’d envisioned for my child would come to fruition. Then I thought about the Hoyts and realized that my child’s life — and mine as a parent – could be so much more than I ever dreamed.

Dick always said that running marathons wasn’t about him, but about helping Rick achieve his goals and that being a father was his greatest accomplishment. And I get that.

Now, let’s be clear — I am not about to start running marathons, but I have embraced that life isn’t always what you expected and that it’s often even better than you envisioned.

Curveballs can lead to the most amazing journeys. So thank you, Dick Hoyt, for reminding me of that and inspiring others to accept, embrace and overcome the challenges of life.