Growing up, we didn’t take a lot of vacations. Summer days were rarely spent at the beach. I didn’t go to camp — other than one summer of gymnastics camp – and aimlessly driving without a destination was not my family’s thing. However, I recall my childhood summers growing up on Granville Road as some of the best days of my life.

Our house was surrounded on two sides by woods, including the Stanley Park Wildlife Sanctuary. One side of my house had a hill leading to an old cemetery and the other side faced the road. What I’m about to write makes me feel . . . old . . . but “back in my day” summers were truly a time of leisure, and for that I am grateful.

I was lucky to live with my grandparents and my grandmother did not have to work a job outside our home. She did volunteer work during the school year, but summers were for relaxing.

We did not have a pool but we did have the river.

Just a short walk down the steep hill on the backside of our house and the Westfield River was right there, meandering through the woods. There was a sandy, but rocky, “beach” next to the swimming hole. 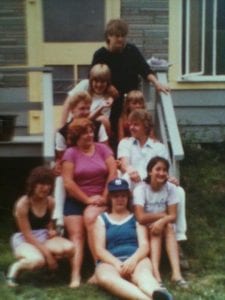 One of my family trips to the Poconos with cousins. I’m at the bottom right and my cousin Dani is to my right in the hat. Circa 1984.

My aunts and uncles had dug out rocks from the river next to the beach and used them to make a dam, creating our very own river pool. On one side was the beach and on the other was land that jutted out a bit into the water. There was a large, sturdy tree there that hosted our rope swing which we used to swing into the water. It wasn’t really deep enough for cannon balls, but you could take a swing and not get hurt.

My aunts would place their towels in the beach and “lay out” to get tan. My Uncle Don taught me to swim there by holding onto the rocks of the dam and kicking my feet behind me.

Sometimes, when the real dams were opened to push water down the river, my uncle would bring us to the small bridge on Northwest Road where we would get into inner tubes and let the rushing water push us down to our swimming hole where we would hop out, lugging the giant tubes up the steep hill.

Our summer trips were always to visit family. Both my grandfather’s and grandmother’s sides of the family lived in New York and New Jersey and there was always a party to attend on a long weekend. We usually visited relatives at their homes but would occasionally rent a place. One year we stayed on the Jersey shore. Another year we camped at the Poconos. We always had several families filled with aunts and uncles and cousins, all blended together.

Several summers were spent at my Aunt Ginny and Uncle Tom’s in New Jersey. We usually went on a weekend and my grandparents would leave me with my cousins for a couple of weeks. I’m sure it was a needed break for them, and for me, it was always the best part of summer.

My cousin Dani was three years older than me and her sister Sunny was three years younger than me, so I was right in the middle. Usually it was Dani and me who spent the most time together. We didn’t do a whole lot, but we swam and took walks and went to the movies. Those were the best summers.

My cousins and I keep in touch — mostly through Facebook these days – and have had a few family reunions over the years but we are long overdue. My kids have only met two sets of Jersey cousins, which makes me sad.

I try to give my kids relaxing summers with day trips to the beach and road trips — with destinations – and I hope they will look back one day when they are adults and think that their childhood summers were the best, too.