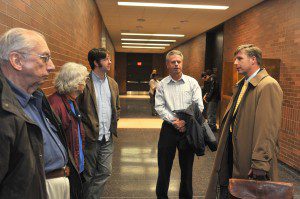 Northampton Attorney Mark A. Tanner, of Bacon & Wilson, right, meets with, left-right, Ernest and Elizabeth Simmons, Dean Winters, brother of Brian Winters, and Tom Smith, prior to a hearing at Hampden Superior Court in Springfield yesterday. Tanner is representing the Ward 2 residents of the city to help resolve the Ward 2 City Council vacancy seat. (Photo by chief photographer Frederick Gore)

SPRINGFIELD – A Hampden Superior Court judge rejected a petition for an emergency injunction ordering the city to seat Brian Winters as the Ward 2 City Councilor.
Judge Richard J. Carey however, did cite the need to act quickly to resolve the issue of the appointment process to fill the vacant Ward 2 seat, because Ward 2 residents have not been represented on the city’s legislative body since August 2012 when the former councilor, James E. Brown Jr., resigned his position.
“Both side are seeking direction so the residents of Ward 2 can be represented,” Carey said.
The city filed a motion on Feb. 8 seeking a declaratory judgement and naming Winters as the defendant in the motion. Both the city and Cross Street residents are seeking clarification from Hampden Superior Court of the process to appoint a person to complete the term of former Councilor Brown.
Winters and the Cross Street residents are represented by Attorney Mark Tanner of Bacon & Wilson of Northampton, who filed a counter motion seeking Winters’ immediate appointment to the City Council and claiming that the council violated his civil rights when it failed to vote on the appointment in October of 2012.
Tanner argued that the court should issue an injunction “ordering the city to seat Mr. Winters” immediately and that the City Council acted improperly when it ignored the opinion of the city’s Law Department “that Mr. Winters is the candidate who received the second most votes and should be seated.”
“On October 4, 2012 the City Clerk informed the City Council that Mr. Winters was the candidate with the next highest vote, which triggered an obligation on behalf of the City Council to seat Mr. Winters,” Tanner said. “The City Charter outlines the process of replacing a city councilor.”
Tanner argued that the language of the charter states the City Council “shall, which is not discretionary and means the same as must. We know they didn’t do that. Councilors abstained citing the fact that Mr. Winters is a plaintiff in a lawsuit against the city. Mr. Winters was exercising his fundamental constitutional right” as a party in the suit pertaining to the Cross Street playground being transferred to the School Department and incorporated into the site of a proposed elementary school construction project.
“The process is that if the City Council does not act within 15 days the (appointment) then goes to the mayor, the choice shall be made by the mayor to appoint a person who is qualified under City Charter,” Tanner said. “It went to the mayor on Oct. 14, 2012 and Mr. Winters was never appointed.”
Tanner also anticipated the city’s argument that Winters is not a “candidate” in that his one vote came by way of a write-in on the general election ballot and cited state law he states supports a write-in as establishing a person as a candidate.
The attorney representing the city before Carey, William J. O’Grady of Southampton, countered that there is sufficient ambiguity in both state law and the City Charter to challenge if a single write-in ballot qualifies a person as a legitimate candidate.
O’Grady said that Winters “is someone who was never presented in anyway to Ward 2 voters. What I am suggesting to the court is that it is not clear cut.”
“The (City) Charter doesn’t say the next vote getter, it says candidate,” O’Grady said. “How can a person who was never presented to the voters satisfy the requirement of being a candidate? So what is a candidate is the real issue.”
“We’re here on an accelerated motion for summary judgement. I suggest that there is no emergency,” O’Grady said. “We’re looking to the court for clarification.”
Carey accepted that argument.
“I agree that there is no precedent to justify issuance today of judgement,” Carey said. “This is an appropriate issue to be determined by summary judgement (under the routine 9-A process which typically takes 90 days).”
“Whichever judge determines this case, the facts are important and some facts are cloudy,” Carey said. “The judge (assigned the case) could turn the clock back and order the city council to appoint a person. There are a couple of interesting legal issues. Both side are seeking direction so the residents of Ward 2 can be represented.”
Carey suggested that Tanner and O’Grady work together to clarify the facts of the case.
“I think that can be done within 60 days,” Carey said. Tanner suggested a much shorter time, 10 days.
“Whatever you guys agree to,” Carey said.
The summary judgement hearing will give both sides the opportunity to argue the definition of a candidate and how the law should be applied to this issue.