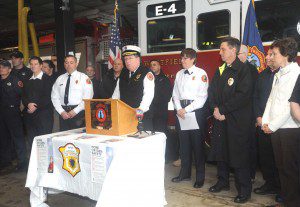 Stephen D. Coan, the Massachusetts fire marshal, speaks at a press conference where he announced that the fire which claimed the life of Margaret A. Lunden, 72, was caused by smoking in a residence where oxygen was in use. With him at the press conference were firefighters who contained and extinguished the fire end evacuated General Shepard Apartments and others involved in the fire and its aftermath. In the front row are Deputy Chief Mark Devine, commander of the firefightingn group which first responded to the fire, Deputy Chief Patrick Egloff, the department’s fire prevention officer, Fire Chief Mary Regan, police Capt. Michale McCabe and Tina Gorman, director of the Westfield Senior Center which opened it doors to the residents when they were evacuated from the building. (Photo by Carl E.Hartdegen)

WESTFIELD – State Fire Marshal Stephen D. Coan came to the city yesterday to report, together with city police and fire officials, that the fire which caused the death of city resident Margaret A. Lunden, 72, was the result of smoking in a residence where oxygen was in use.
Lunden died Monday when fire broke out in her home at the General Shepard Apartments.
“The cause was smoking on home oxygen,” said Coan.
He pointed out that the widespread use of oxygen in homes creates the potential for fire disasters and said that smoking may not be allowed in a home where oxygen is in use.
“There cannot be any smoking in the same home where oxygen is used,” he said.
He points out that oxygen makes a fire burn faster and hotter and said, when it is used in a home, “Oxygen soaks into clothing, upholstered furniture and hair creating an oxygen-enriched environment that is dangerous even when the oxygen is turned off.”
“Smoking on home oxygen is not just a personal decision, but a public safety threat. It puts everyone in the building at risk,” he said.
Westfield Fire Chief Mary Regan reports that the smoke detector in the woman’s apartment was activated and triggered alarms both in the communal areas of the building and at fire headquarters.
The responding firefighters under the command of Deputy Chief Mark Devine, Regan reports, were able to determine which apartment the fire was in and, when they entered, found it full of black smoke.
Regan said that the smoke filled the room to within inches of the floor as the firefighters sought the victim in the blackness.
Regan said that by “heroic efforts” firefighters found the victim, who had been alone in the apartment, and got her to the hospital but she succumbed there to her injuries.
“The smoke alarms worked in this fire and they’re your first line of defense,” said Regan.  “But they cannot save people all by themselves.”
She stressed that an alarm can provide a few seconds to act and said that it is vital for that time to be used to escape.
“Don’t try to fight the fire yourself” she said, “get out, close the door and call for help.”
Regan said that there are indications that Lunden did not leave immediately but lost time trying to put out the fire herself.
She noted that Lunden’s death is the second death by fire of a senior citizen in the city this winter and pointed out that Tina Gorman of the city’s Council on Aging has been working with the fire department to prepare a fire safety educational program for senior citizens which is scheduled to begin next week in The Westfield News.
Coan said that the Department of Fire Services has a program about safe use of oxygen in the home available on its web site, www.mass.gov/dfs, which can be found by clicking on the Fire Safety Topics tab and continuing to the Home Oxygen button.
He also noted that Gov. Deval Patrick has presented a proposal which is before the legislature to help educate adults about fire safety.
He said that the Executive Officer of Public Safety and Security has, for several years, been able to officer small grants to cities and towns to allow firefighters to provided fire safety programs for school children and said that, if approved by the legislature, the new ‘Senior Safe’ program has the potential to help senior citizens protect themselves from fire hazards.