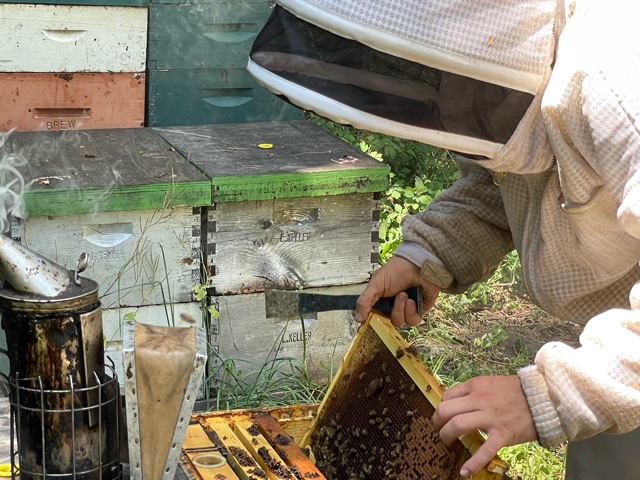 SOUTHWICK-As a smoker calmed the thousands of bees in the 44 colonies just off East Mountain Road on a recent 90-degree day, William “Bill” Crawford and his team were meticulously pulling the honey from the hives and checking the health of the beehives. 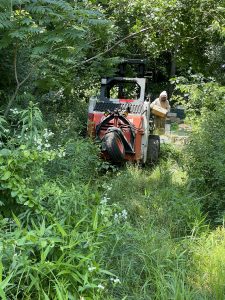 Many of William “Bill” Crawford’s beehives are tucked away off main roads – including East Mountain Road in Westfield. (LORI SZEPELAK PHOTO)

“The smoking process calms the bees and they don’t attack us,” said Crawford, adding, “We can pull a bee yard in less than an hour.”

To ensure everyone’s safety – including this writer – everyone wears protective gloves and dons a white beekeeping  suit.

“Bees do not like white,” said Crawford, who was assisted on this day by David Pena and Wiston Reyes.

“The end of June is when we harvest and extract the honey,” said Crawford, noting he has numerous beehive locations between Massachusetts and Connecticut that are a mile or two from each other. 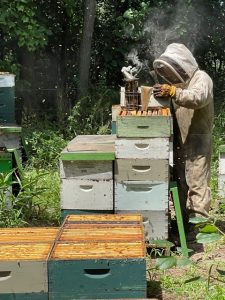 Beehives for Billy C’s Raw Honey business are found in many regional communities – including this one in Westfield. (LORI SZEPELAK PHOTO)

During the hour-long process, the men were pulling the honey off the hives.

“It’s the apex of our beekeeping season, the following week, nearly all of our hives will be shipped to Ohio for cucumber and pumpkin pollination,” said Crawford.

By the end of the week, Crawford and his crew took the honey out of the comb and brought it to the honey house in Southwick for the extracting process.

What began as a humble hobby at the age of 15 has since grown into the largest migratory beekeeping operation in Western New England, notes Crawford.

“In 2007, I started selling surplus honey out of my backpack at school and at the produce farm I was working at in Westfield under the name Billy C’s Raw Honey,” said Crawford. 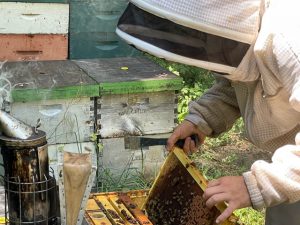 Today, Crawford has 1,600 beehives and these colonies can produce more than 75,000 pounds of honey each year, much of which is derived from the Connecticut River Valley.

“In an era where you have to think twice about what’s in your jar of honey, and if it’s even from where the label leads you to believe, we strive to always meet the consumer’s ever-evolving expectations with a product that can proudly be labeled what it truly is, local raw honey,” he said.

Crawford said he is seeking to add new accounts to his wholesale business.

“Not all local honey is created locally,” said Crawford. “Many area honey packers, with their hometowns listed on the label, want you to think their product is produced locally, instead of merely poured into the jar locally.”

Crawford noted that since the average beehive in Massachusetts and Connecticut produces “only 30 to 50 pounds” of honey each year, businesses should consider whether a supplier’s numbers “add up.” 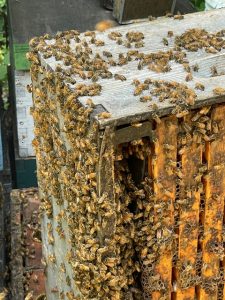 Bees are hard at work in a bee yard in Westfield. (LORI SZEPELAK PHOTO)

In 2020, Crawford said his bee business yielded 74,000 pounds of honey and this year that number may be down slightly due to the early weather warm up and cool down.