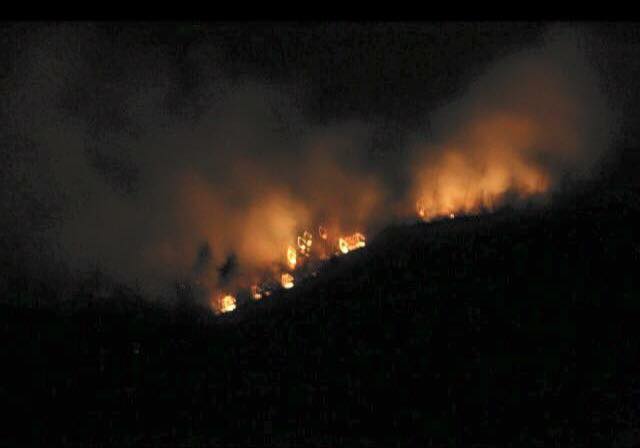 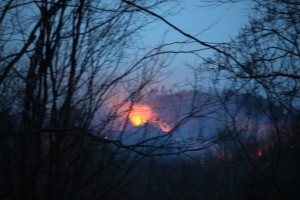 Fire on Tekoa Mountain taken the afternoon of Tuesday, March 8, 2016, by Deborah Danoff-Hoppe (used with permission).

MONTGOMERY – Crews from four local fire departments along with the state police have been battling a widespread brush fire since yesterday.
The fire started north of Tekoa Mountain, just outside of Westfield, at 3:46 p.m. Tuesday, according to Westfield Police Sgt. Jeff Baillargeon. The fire is “pretty big,” he said, and is located near West Road and the lower reservoir.
Massachusetts State Police Trooper Paul Sullivan said that it was reported at 7 p.m. that the fire had still not been contained and had burned 15 acres so far at that time.
Fire crews from Westfield, Russell, Montgomery and Huntington along with the Massachusetts State Air Wing continue to fight the blaze, Baillargeon and Sullivan reported between 8:30 and 9 p.m. Tuesday night.
Sullivan said personnel from the Massachusetts State Police Barracks in Russell and from the Westfield Police Department were also on scene.
Easthampton Fire Chief David Mottor told Westfield News media partner, WWLP, that three different task forces were formed and are made up of several different fire departments. He said each one is key because of their specialized equipment. This includes all-terrain trucks and utility vehicles, some with fire equipment on board to get firefighters to the fire.
Mottor said a state police helicopter flew over the site of the fire Tuesday night and determined about 50 acres had been burned.
He added that no homes are in danger but that a cell tower may have been damaged.
Mottor said Wednesday’s work will be very labor-intensive for firefighters on the ground, as they will have to dig up earth and throw it on the fire manually.
Granby Fire Chief Russ Anderson said in situations like this, firefighters will be sent in shifts for as long as it takes to put out the fire safely.
Anderson said the small amount of moisture in the air Wednesday could keep the fire at a minimum, but that could change as the air heats up throughout the day.
Westfield Fire Chief Mary Regan said firefighters had to pull out of the area Tuesday night because it was too dangerous of a situation in the dark.
Mottor said the goal is to have the fire out by 3 p.m. Wednesday.
No cause has yet been determined.
Staff Writer Christine Charnosky can be reached at [email protected]