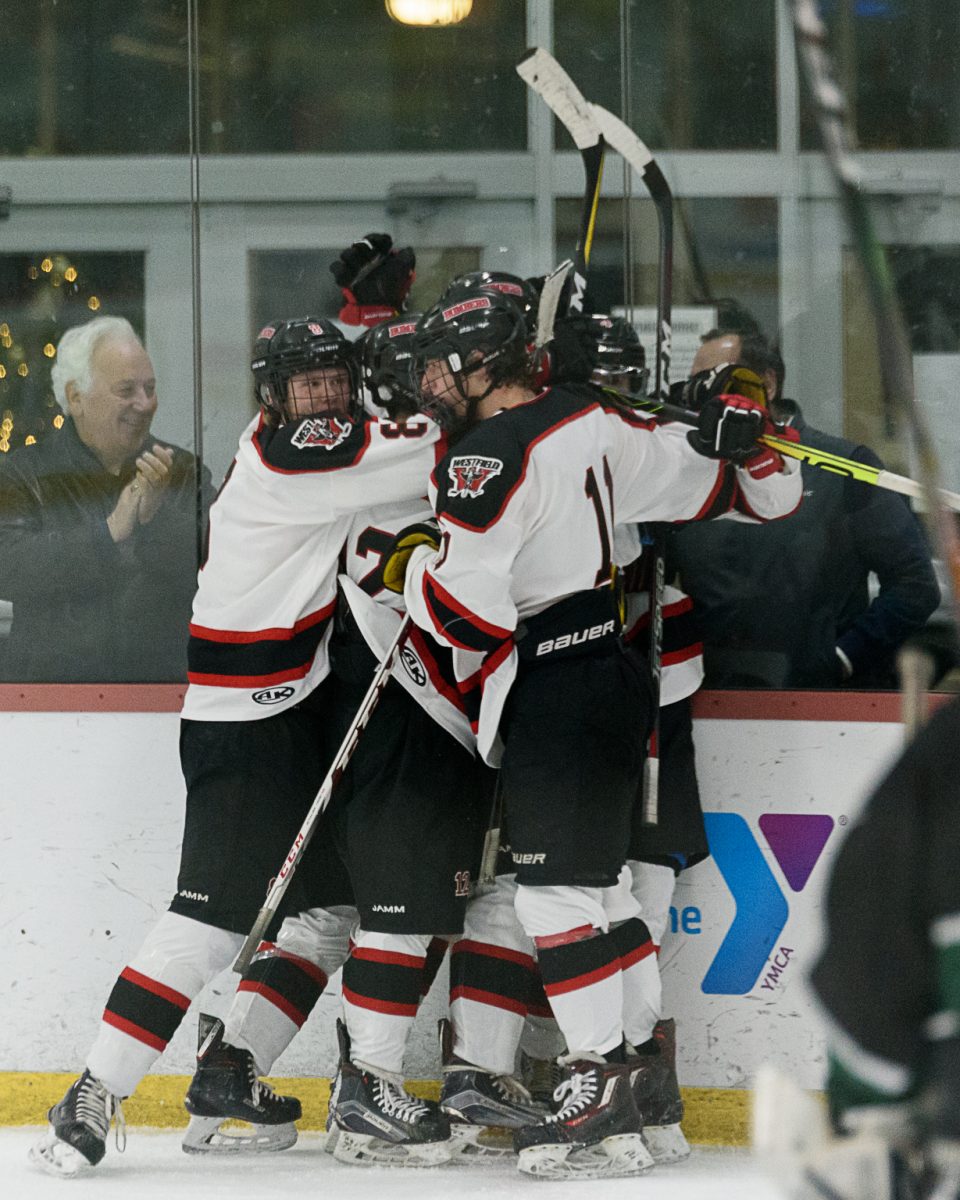 Westfield players celebrate after getting their third goal in Thursday’s 3-1 win over Minnechaug at Amelia Park Arena. (Photo by Marc St. Onge)

WESTFIELD – While some things change like roster turnover from year-to-year, some things remain the same like longtime Westfield High School boys ice hockey head coach C.B. “Moose” Matthews.
For the Westfield Bombers, that is a good thing.
The 2018-19 Western Massachusetts runners-up opened the 2019-20 season in fine fashion, upending Minnechaug 3-1 Thursday night at Amelia Park Arena. Bombers junior goalie C.J. Czarnecki delivered a stellar effort with 26 saves. The only Falcons shot that found the back of the net was one where he was screened on a play.
“I just stayed in the zone,” Czarnecki said, following the opening night victory. “That’s what I’m here for – to stop pucks.”
Coach Matthews was impressed with his goaltender’s effort.
“(C.J.) kept us in it,” Matthews said. “Minnechaug was all over it quick, tough. …They were a lot stronger than I anticipated.”
Czarnecki and the Westfield defense were tested early and often.
In the opening seconds of the game, Minnechaug had a 3-on-2 breakaway but Westfield closed the gap within a heartbeat. The Falcons dominated the first eight minutes or so, outshooting the Bombers 4-0 but senior forward Gavin Carzello lit up the home half of the scoreboard.
Carzello scooped up a rebound out in front of the net and hammered home a goal with 6:40 remaining in the first period. Sophomore forward Kevin Hosmer and junior defenseman Connor Fitzgerald assisted on the play.
Minnechaug continued its relentless attack in the middle frame, outshooting Westfield 11-5 in the period. The problem for the Falcons though were that two of those Bombers shots found the back of the net.
Hosmer scored on a pass from senior forward Matt Bacon with 5:13 remaining in the second period. Junior forward Aidan Fitzgerald made it 3-0 on a pass from junior forward Joe Taupier with 46.7 left in the period.
“We had our chances and capitalized on a couple out front of the net,” coach Matthews said. “Grab a goal when you can and we did.”
Minnechaug scored with 4:44 on the third period clock when Falcons’ players screened the goalie, allowing Joe Manning to slip a slapshot past Czarnecki from just outside the right circle.
Westfield killed off two Minnechaug power play chances in the closing minutes.
It was the first game back on the ice for Westfield after Longmeadow dashed their quest for a four-peat in the 2018-19 title game.
“That defeat just motivates me more,” Czarnecki said. “We’re always trying to win and do our best. Hopefully we’re going to have a solid year.”
Westfield was scheduled to take on Hudson High School Dec. 14 before another showdown with Longmeadow Wed., Dec. 18 at Amelia Park Arena at 7 p.m.

GIRLS BASKETBALL
Bombers win in Willey’s head coaching debut
Westfield 46, Monument Mountain 36
Everything went according to plan for the Westfield Bombers in Dylan Willey’s head coaching debut.
Olivia Hadla scored a game-high 19 points, Chandler Pedolzky had 11, and Westfield went a combined 7-of-10 from the free throw line.
“We had a quick burst of offense,” said Westfield’s first-year head coach, Willey. “Through three quarters we were flying everywhere, rotating well and rebounding well.”
Westfield controlled the tempo of the game nearly from start to finish. Monument Mountain pulled to within four points late with the Bombers making multiple substitutions.
Westfield put the game out of reach though with a 6-0 run to end it.
“I thought our senior leaders really led the way in how they carried their way on court,” Willey said. “It trickled down to our junior class and below.”
Westfield returns to action Monday night against visiting West Springfield at 7 p.m.