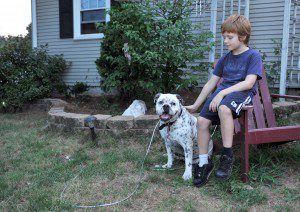 Nicholas Wackerbath, 9, sits with his 2-year-old dog Buddy in the front lawn of their home in Southwick last night. Buddy has been the subject of controversy between the Wackerbath family and neighbor Rebecca Symmons. Wackerbarth said since a June 22 incident between the families, his dog has been tethered with an industrial cable. Symmons claims the dog is a hazard to the neighborhood. (Photo by chief photographer Frederick Gore)

SOUTHWICK – Buddy Wackerbarth, an American Bulldog-Dalmation mix, isn’t going anywhere just yet.
The dog, which is still a puppy according to owner John Wackerbarth, has several complaints against it from neighbor Rebecca Symmons.
A dangerous dog hearing was held Monday and members of the Board of Selectmen listened to both parties, as well as Animal Control Officer Tracy Root.
An official complaint was filed with Root June 22 after Symmons said her 11 year-old son was walking her parents’ dog past the Wackerbarth’s Pineywood Drive home. Symmons, who lives directly across the street, said Buddy attacked the family dog. And, she claimed, it was not the first incident.
“I have taken my dog out of that’s dog’s mouth on two occasions,” said Symmons. ‘And my husband rescued my friend’s dog.”
Wackerbarth maintains that Buddy is not a vicious animal.
“I think this has been brought forth because of issues Ms. Symmons has with my wife,” he said, “and this is not the place to bring that up.”
Wackerbarth said since the June 22 incident, his dog has been tethered with an industrial cable.
“He has not broken it,” Wackerbarth said. “He is a puppy and a bulldog and has the tendency to be territorial.”
However, said Wackerbarth, the dog is not out to hurt anyone.
“My daughter let the dog out to go to the bathroom and he got out of the gate,” he said. ‘My daughter – who is only 85 pounds – picked up the dog and brought him home.”
Symmons’ complaint about the evening of the attack on her parents’ one-year-old black lab named Moses resulted in a puncture wound on Moses’ leg.
Root told the selectmen Buddy is “people-friendly” but “very strong.”
Symmons was looking for the dog to be removed and Wackerbarth had him on a list with an American bulldog adoption organization. Root said she did not believe that was necessary at this time.
“My recommendation is a solid floor kennel with a top on it,” she said. “When the dog is outside, he needs to be in it because he has been breaking cables.”
Symmons and Wackerbarth both agreed to those terms during the hearing held during the Selectmen’s meeting.
“The dog officer will go to the Wackerbath’s house and discuss the type of kennel and set a definite time to get it completes,” said Chairman Arthur Pinell. “If it does not work, we will reopen this.”