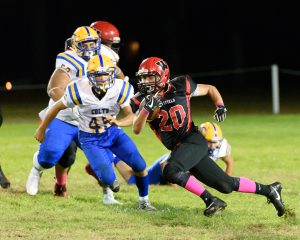 Mitchell reached out to bring the ball in with one hand (reminiscent of just about any catch from Odell Beckham) in stride about halfway to the end zone and sprinted untouched the rest of the way for the first score.
Chicopee Comp extended its lead to two touchdowns with 7:55 left in the second half on another pass to Mitchell, this time from nine yards out (but more of the garden variety).
A 49-yard reception from senior wide out Rafael Santiago set up the score by giving Chicopee Comp the ball in the red zone.
Finally, after 27 minutes of action, Westfield cracked the goose egg on its side of the scoreboard.
Westfield put together a seven-play, 73-yard drive that culminated in a three-yard touchdown run from junior running back Dakotah Moynihan with 8:32 on the third quarter clock.
In the fourth quarter, Chicopee Comp’s dynamic duo led the air brigade again.
After hooking up with Santiago for a 28-yard pass play, Lepage connected with Mitchell for a third time on a contested play in the corner of the end zone, resulting in a spectacular 25-yard touchdown with 10:03 left in the game.
Westfield attempted to cut into the deficit late, but Chicopee Comp intercepted the ball in the end zone to end any comeback hopes.

Rams dream a nightmare for competition
BERNARDSTON – Southwick-Tolland’s dream season continued with James Longhi and Brad Durand leading the pack with a score of 4-under-67, nine strokes ahead of the next closest competitor at 76, nine strokes back to claim the Pioneer Valley Interscholastic Athletic Conference two-ball championship Friday at Crumpin-Fox Club.
Durand finished with six birdies in damp, cool conditions. Longhi had two.
There was a four-way tie for second place between Longmeadow, Holyoke, Belchertown, and East Longmeadow.
“It was a great day,” said Southwick coach Al Selden, “and on we go.”
Already this season, Selden recorded his 100th career victory, the Rams (17-0) clinched a league title – their third in as many seasons – and continue their quest for perfection.

Eagles swoop past Tigers
Franklin Tech 2, Westfield Technical Academy 0
Westfield Tech keepers Liliya Stepanchuk and Kiaraly Serrano combined for five saves.
Westfield Tech came out slow on offense, managing just three shots in the first half. The Tigers got it going in the second half with 13 shots on goal but Franklin Tech goalie Tabi Hamilton corralled every shot.

Saints play well, fall late
Duggan Academy 2, St. Mary’s 0
Despite controlling play for much of the first half and early into the second, St. Mary’s fell on the road. The Saints had some great chances but just could not connect.
Allie Goodreau and Chloe Lussier applied the pressure up front while Erin Olearcek and Caroline Leahy anchored the defense.

BOYS’ SOCCER
Gators net one
Gateway 3, Sci-Tech 1
Jayden Marge (penalty kick), Joe Coon, and Robert Crochere each scored a goal to lift Gateway (1-8-1) to its first win of the season.
Evan Lee and Marge each had an assist
Gateway goalie Preston Coffey made eight saves in the second half. John Foley made two in the first half.