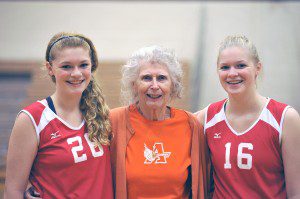 AGAWAM – The Westfield High School girls’ volleyball team had the vaunted Agawam Brownies on the ropes, serving game point for a 2 sets to 1 lead. But the Bombers made a service error, went on to lose the third set and fell 3-1 in the match Wednesday night.
Agawam 6-foot, senior outside hitter Alicia Rackliffe had 20 kills, 7 digs, 1 ace, and 1 block to lead the Brownies past Westfield 25-17, 23-25, 27-25, 25-16.
Westfield (7-5) took advantage of Agawam’s mistakes in the second set – the Brownies committed eight unforced errors to fall behind by six points, 21-15 – to pull out the two-point victory.
Abby Hart made a couple of key kills early to give Westfield a seven-point advantage that proved to be the difference down the stretch during that set.
In the third set, an apparent officiating blunder cost the Bombers a point, and ultimately the set. A ball hit by Agawam (9-3) appeared to go over the net outside the end pole, but the official after a brief pause ruled it had traveled over the net in bounds. The Brownies, rather than face a tie, led 20-18.
Westfield finally tied it at 21 on a well-placed spike from Alexa Morin. After ties of 22-22 and 23-23, the Bombers went ahead 24-23 before committing a service error for another tie at 24. The two teams were tied again at 25 before Rackliffe delivered a pair of kill shots.
Agawam controlled play during most of the fourth set as Westfield appeared to tire.
“We played probably one of our better games all year,” Westfield coach Greg Thompson said. “We didn’t give up. When we got down, we pushed back. We played really well. We’ll make some noise in the playoffs.”
Thompson said Rackliffe was the difference maker.
“She’s a great outside hitter,” Westfield’s coach said of the tall, athletic Brownie. “She was on today.”
Westfield’s Gabby Hernandez made an impact for her team, collecting 18 digs and eight service points.
Two other players, Ali Johnstone and her sister Kelsey, made huge contributions for the Bombers. They even had their grandmother, Agawam coach Patricia Demers a bit on edge.
“I was saying please, I don’t want to go past four games,” coach Demers said. “I’m very surprised. I knew (Westfield) was good. I didn’t know that they were that good. They’ve got spunk. They’re picking up everything and playing good defense.”
Demers, 80, a resident of Westfield, is in her 15th season coaching Agawam. A boys’ and girls’ coach, she has been involved with the sport for more than 60 years. She is a 2012 Mintonette Medallion of Merit Award winner. It is the Volleyball Hall of Fame’s most prestigious award presented outside of induction.
Southwick 3, Putnam 2
Simone Thibault (13 digs, 5 kills), Lizz Grove (6 kills, 7 digs, 5 aces), Jess Martin (12 assists, 4 aces), and Millan Andreoli (5 aces, 6 kills) had great games for Southwick, which defeated Putnam in a back-and-forth affair, 25-20, 21-25, 24-26, 15-10.
Putnam’s Alexis Miranda had 19 service points, six kills, and 10 digs; Kim Perez finished with 12 digs and 11 service points.