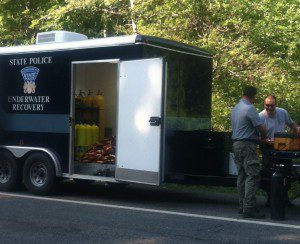 Massachusetts State Police use a compressor to fill oxygen tanks for their dive team this morning in Becket. (Photo by Peter Fancis)

BECKET – At 8 a.m. yesterday, Greenwater Pond was a quaint and quiet New England landscape and, aside from the occasional rumbling of tractor-trailer trucks on the nearby Massachusetts Turnpike, an idyllic scene the likes of those depicted by Robert Frost and Henry David Thoreau.
That backdrop quickly changed into one of a busy crime scene by early afternoon, as the second day of a collaborative search between the dive teams of the Massachusetts and New York State Police for the remains of Jamie Lusher began.  Lusher was a Westfield boy, missing since 1992, whose remains are thought to be somewhere in the pond that Becket shares with the neighboring town of Lee.
In the wake of a recent confession from Lewis Lent Jr., a convicted serial killer who is currently serving a life sentence in Bridgewater for the kidnapping and murders of two children in the early ’90s, Massachusetts State Police have concluded that the boy was murdered by Lent and that his remains are located in the pond, according to information detectives have received from Lent.
The combined dive teams began their recovery efforts on Tuesday, searching approximately a third of the 88-square-acre pond before calling it a day at 4:00 p.m  Another third of the pond was searched yesterday.
Yesterday’s search began at 8:30 a.m. with divers descending into the murky depths of the pond, which is said to be just under 60-feet deep at it’s lowest point. A State Trooper conducting traffic this morning estimated that yesterday’s search ended at around 4:30 p.m.

Massachusetts State Police unroll weighted lines that divers will use today to continue to search Greenwater Pond in Becket for the remains of Jamie Lusher. (Photo by Peter Francis)

According to Mass. State Police spokesman David Procopio yesterday, the first stage of the search was thorough, but there were some difficulties.
“Some of the weeds in the bottom of the pond were so thick, that the side-scanning sonar equipment used on the sides of the boats wasn’t as effective,” Procopio said. “We will be using spot-scan sonar equipment today, which, rather than being used on the side of the boat(s), is dropped into the water and rotates 360 degrees on a tripod. We’re looking for any depressions in the bottom of the pond, and also searching shallower areas.”
Procopio also introduced Wayne Pierce, a Chester resident and former vice president of a local diving club, whose knowledge of the pond and its topography is proving invaluable to the recovery effort.
“It’s mucky and sandy down there,” Pierce said of the terrain at the bottom of the pond, a body of water where some of the 25 or so members of his club dive about three times a month.
When asked about what went through his mind upon hearing news that the boy may be resting in waters familiar to him, Pierce was immediately looking to assist however he could.
“I have a hand sonar, and I’m going to carry it in (the pond) from now on,” said Pierce. “If I’m down there (in the water) killing weeds and I find something, I’ll put my flag on it, go to the surface, and call the number they’ve given me. If they don’t find anything, I’m going to keep looking… Anything to help.”
The multi-market media throng that swarmed around the recovery scene Tuesday was much smaller yesterday, and as such, was granted access to the pond via a New York State Police air boat piloted by Sgt. Tom Barden, a Division Dive Officer for the NYSP.
Once the boat had reached the middle of the pond, Sgt. Barden addressed the media in a makeshift floating press conference.
Barden confirmed that the search was being conducted with the aid of the aforementioned spot-scan sonar, which he says will be effective.
“It sits on the bottom (of the pond) and is a little more precise,” he said. “It doesn’t cover as much ground as quickly, but it is more thorough.”
Regarding the method with which Massachusetts and New York divers were conducting the physical search, Barden stated that the divers were operating using line patterns stretching from the shore along a grid.
“There are lines with weights at each end with one diver assigned to each line,” Barden said. “They are sifting through lots of sediment down there. Once you hit the bottom, there’s no visibility. It’s all by feel, so they’re looking for small, out of place items.”
Utilizing a team of divers from throughout the Hudson River Valley, Barden’s team is working diligently with their Bay State counterparts to find Jamie Lusher but the process is far from an easy one.
“They are basically crab walking one or two feet at a time down there (along the lines),” Barden said of the divers, who stay underwater between a half an hour to an hour working along the lines, which are 100 to 150 feet in length. “The progress seems slow at times, but they are covering every inch of ground.”
While both teams of divers continued to kneed the pond’s mucky bottom like dough yesterday, Mass. State Troopers controlled the flow of traffic above ground, wearing reflective traffic vests and staying hydrated in their blue uniforms under the Berkshire county sun, while temperatures climbed well over 90 degrees.
The divers, however, were facing a different extreme, as the water was reported to be a little over 40 degrees at the very bottom of the pond, according to officials.
Despite the conditions, the collective mood and attitude amongst both diver teams and support officers alike yesterday seemed to be identical to that of Mass. State Police Colonel Timothy Alben regarding the outlook of the recovery operation.
“We remain hopeful.  We remain optimistic. But we also have to be realistic,” he said at a press conference at Westfield’s South Middle School on Monday, prior to the start of the search.
Barden agrees.
“We do cold cases quite a bit,” he said of his unit while staring out onto the chilly water behind jet-black sunglasses. “After 24 years of diving, everything’s realistic.”
The search is continued this morning and is expected to wrap up around midday, if nothing is found.