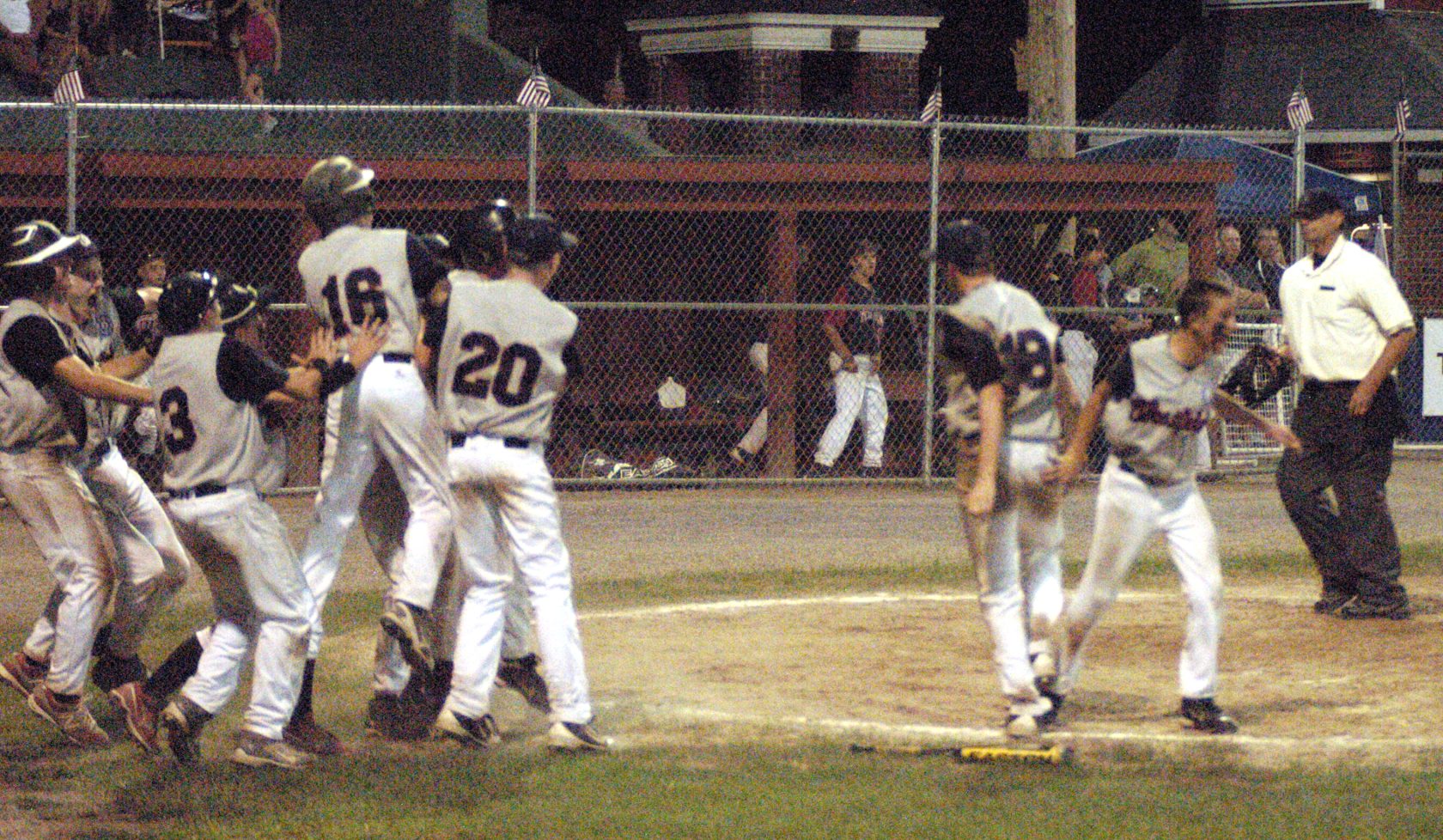 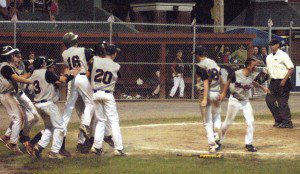 WESTFIELD – It was one of the wildest, craziest, and most memorable comebacks in a long time Wednesday night at Bullens Field that will leave a lasting memory in the minds of local fans for years to come.
The Westfield Babe Ruth Baseball 13-Year-Old All-Stars rallied from a seven-run, fifth-inning deficit and capped a two-run comeback in the bottom of the seventh to defeat Pittsfield 14-13 in the state championship Wednesday night at Bullens Field.
Pittsfield’s fourth reliever of the game plunked Dillon Bazegian with a bases-loaded one-out pitch in the seventh, scoring Matt Masciadrelli and sending Westfield to the eastern regionals in Manchester, N.H., beginning July 26.
Sam St. Jean, Kyle Roberts, and Masciadrelli drew consecutive walks to begin the seventh for Westfield, prompting Pittsfield to lift its third reliever. With one out, Jack Yvon was hit by a pitch, pulling the Whip City All-Stars within one run, 13-12. Dalen Mochak drew a walk to tie the game at 13-all before Bazegian took one for the team.
“We battled,” Westfield 13-Year-Old All-Stars manager John Bonini said. “It’s a cliché – ‘never say die,’ but these players never quit on us the whole game.”
Westfield found itself trailing from the outset, down 2-0 in the first and 10-3 after 4 1-2 innings. Pittsfield took advantage of the home team’s error-plagued start. The Whip City’s All-Stars committed five errors through the first four innings before finally settling down. Their opponent’s biggest hit in that stretch, a two-run triple from Jake McNeice in the second inning that gave his team a 4-3 advantage.
Westfield battled back from a 3-0 deficit with a RBI hit from Mitchell Longley, and Bazegian’s two-run single, both in the first inning. Then, in the fifth, the home town team exploded for seven runs.
Nate Boucher opened the seventh with a one-out walk. Mochak singled, and both runners advanced on a wild pitch. Bazegian ripped a RBI single down the third base line, knocking Pittsfield ace Izaiya Mestre from the game. The pitching change did not matter. 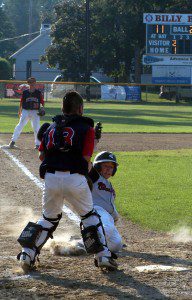 Westfield’s Mitchell Longley slides into home plate safely for the team’s second run in the bottom of the first inning. (Photo by Chris Putz)

A wild pitch brought Westfield within 10-5. Andrew Tobias followed with an RBI double and the next reliever came on. Aidan Dunn walked and St. Jean was hit by a pitch, loading the bases. Kyle Roberts drew a walk, scoring a run and Pittsfield summoned its fourth pitcher of the inning. A fielder’s choice on Masciadrelli’s ground out made it 10-8. Longley blasted a game-tying, 2-run double before being caught in a rundown after an overenthusiastic overrun of the bag.
Pittsfield reclaimed a one-run lead in the top of the sixth, but resilient Westfield tied it in the bottom half of the inning on Andrew Tobias’s RBI single. Tobias plated Bazegian, who reached after being hit by a pitch and moved to second on a passed ball.
A pair of RBI singles from Pittsfield in the top of the seventh set the stage for Westfield’s umpteenth rally cry. After the Whip City rallied – behind a raucous crowd of supporters, including other local Ruthers – players, coaches, and young fans stormed the field in celebration.
“It wasn’t the prettiest game but it was the guttiest,” manager Bonini said. “It was a team effort right from (players) one through 18.”
It was also one for the ages – 13, of course.