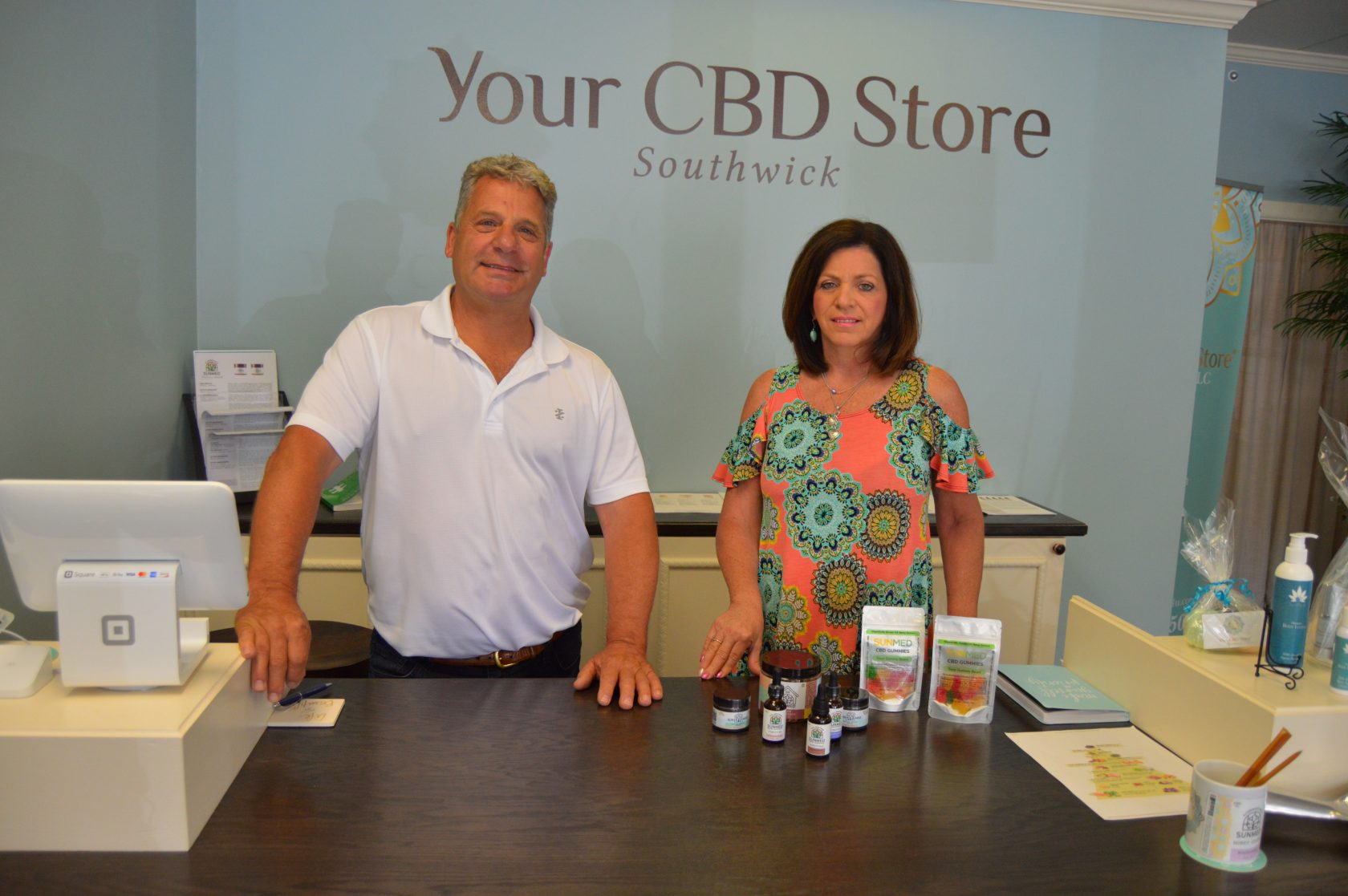 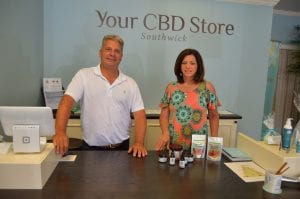 Steve Ferrari and franchisee Lorraine Denoncourt with some of their products on the counter. On display on some of their tinctures, lotions, and edible CBD gummies. (Photo by Peter Currier)

WESTFIELD- The legalization of cannabis has opened more possibilities for the already-existing medical marijuana industry in Massachusetts. However, one may have noticed the increasing presence of a specific chemical often found in marijuana being sold in convenience stores, gas stations, and specialty stores within the Greater Westfield area.

Cannabidiol, most often known as CBD, is sort of a sister-chemical to tetrahydrocannabinol, otherwise known as THC. The two chemicals are known as cannabinoids, and they are the two most prominent chemicals found in marijuana. While THC is the substance that gets one high when they smoke cannabis, CBD presents no psychoactive effects, even when consumed by itself. CBD’s effects on the body and mind are mostly considered positive by scientists, and therapeutic in nature.

It has been known to treat seizures caused by epilepsy, anxiety, insomnia, some pain, and some veterinarians have begun recommending that pet owners give it to their dogs for the same reasons.

However, due to the Food and Drug Administrations unwillingness to test CBD products (cannabis remains illegal at the federal level) there is still much more high-quality research that needs to be done. Another result of the lack of regulation is that many stores, like convenience stores, have begun selling the product in an ingestible form, but it is considered much lower quality. Local shop owners that sell CBD products caution against purchasing the substance from those kinds of stores for reasons of quality, safety, and knowledgeability by the store’s staff.

Joe and Amanda Caracciolo opened Budsuds Soapery’s first physical location in January on School Street in Westfield. Since 2014 the business owners had been running an online version of their store. The two specialize in selling handmade soaps, oils, salves, lip balms, and other products infused with CBD.

One point they made about the difference between their CBD product and those found in gas stations or vape shops is how much they are tested. Joe Caracciolo noted that each of their product batches are tested by third parties three times before they are allowed to be placed on the store shelves. The couple also agreed that, although progress has been made towards regulating it, the lack thereof so far has led to many people being misinformed.

“There are a lot of people who need to be informed about this substance,” said Joe Caracciolo.

Because they specialize in selling CBD, they have the ability to keep a record of all of their batches tests and results. This means that, if a customer has a problem with what they purchased or it did not work the way it was supposed to, the Caracciolos can look up the batch number and check the exact percentage of CBD as well as the results of the product. The same cannot be said for the cheaper versions, the Carcciolo’s said.

“The smaller places just buy it in bulk,” said Joe Caracciolo. “It could be artificial CBD variants. Or it could just be untested.”

Amanda Caracciolo theorized that bigger companies, like those that own the gas stations, are just jumping on the CBD bandwagon because it could make them quick money. 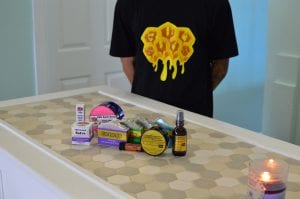 Rehab Resolutions in Southwick has partnered with a larger CBD company and is selling their products in the physical therapy center. Sofia Zanzerella, the CEO of Rehab Resolutions, said  her company has partnered with Kannaway since December. She said Kannaway has a rigorous testing process, similar to that of Budsuds. Industrial hemp, which is now legal in the U.S. and produces CBD, is grown in Austria before it is sent to California to be tested. Throughout the process, each batch is tested three times, before it is sold in any store that carries Kannaway products. They also have the batch number on each of their products, allowing for easy research if a product is found to be not working properly Zanzarella said that Kannway does what the convenience stores cannot –provide education about the product.

“We do a lot of education. We hold a lot of educational workshops,” said Zanzarella, “We’ll talk about what’s going on in the market. There is a research study that just came out that said 70 percent of the products are considered to have arsenic, pesticides, and herbicides. Very few of them had the amount of CBD that it was said to have.”

She added that knowing which process was used to extract the CBD from a hemp plant is extremely important. A common method for extracting the plant is ethanol-alcohol extraction. Zanzarella said that this method isn’t as good for the consumer as other extraction methods, and may not gather as much CBD. The preferred method, known as carbon-dioxide (CO2) extraction, requires a machine that costs upwards of $1 million. This means that a larger company trying to cut costs may opt for the cheaper version, which makes it more difficult for the consumer to know the exact amount of CBD in their product.

Hemp is also known as a ‘bio-accumulator’ according to Zanzarella. That means that it absorbs substances from the ground more easily than other plants. This includes heavy metals, pesticides, and other possibly harmful substances that are found in the soil. With this being the case, it is important for one to know where exactly the plant was grown, which can be found in the batch information.

Also in Southwick is the chain CBD shop, Your CBD Store. The Southwick location is one of more than 200 across the U.S.. Shop owner Lorraine Denoncourt said that the company follows the same rigorous testing process as well as recording batch data. They  also use the CO2 extraction method, a luxury they can afford due to their size.

Denoncourt was a medical consultant for 25 years before she opened the store in March. Her recommendation is that one take CBD consistently for its effects to be felt best. She said that the effect of CBD is hard to notice right away, and that is the point. One may not realize it was doing something for their anxiety or mild pains until they stop taking it.

Denoncourt’s shop is strictly for CBD products, as the name of the franchise implies. They hold bath bombs, lotions, tinctures, and many other methods of using CBD.

Troy Chilson, a physician’s assistant, said the lack of information about what people will be putting in their bodies is concerning. Chilson is a distributor for CBD 1, a company that makes oils, creams, and other CBD products sold online. Chilson has been working to get his products sold in stores, and said  he believes people are still ignorant about the substance.

“CBD should be considered a supplement. It is not FDA regulated. One cannot say that it cures anything,” said Chilson, “What it can do is support many of the functions of your body. It can decrease inflammation, help with your mood, help with sleep, ADHD in children, and other such things.”

One warning Chilson had for those trying CBD is to consider if one would have to pass a drug test for any reason. While it is a non-issue for CBD that is not full-spectrum, some products contain .3 percent THC, which could show up on a test.

He also advised people to consider how the product is absorbed into the body. He said most products only allow the body to absorb 10 to 20 percent of the CBD. His products store the CBD in liposomes, otherwise known as fat cells. This allows the CBD to be absorbed closer to its entirety, he said.

“Not all CBD is created equal,” said Chilson.

Reporter Peter Currier purchased CBD at a local vape shop to test their knowledge and found the following:

I went to a vape shop in the area that advertised  CBD products. I went in and inquired about tinctures. The attendant directed me towards a glass case in the front that had some CBD products in it. The store specialized in vaping products while only having a small amount of CBD products. When I asked the attendant if the bottle I chose was safe to use as a tincture under my tongue, he struggled to give me a clear answer.

He decided that it probably was safe, considering the ingredients list, and I bought the bottle. It was not until later that I had noticed the warning on the side, “Do not drink.” I scanned the QR code on the side of the bottle, and it brought me to a page to purchase more. There was no batch information, and no way to verify exactly what is in the bottle.