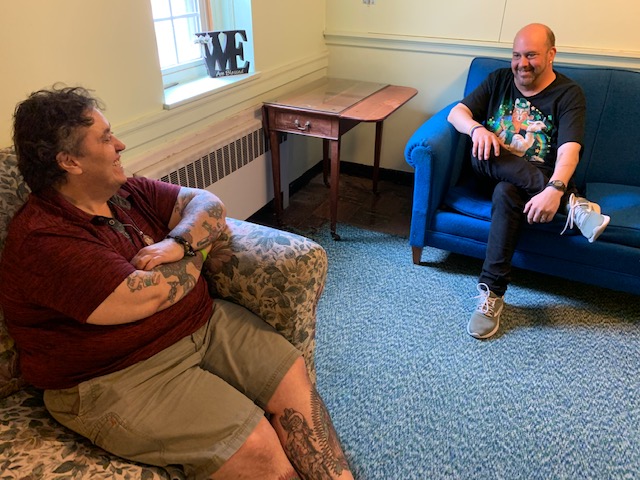 WESTFIELD-For co-facilitators Michael Mansur and Cindy Marty Hadge, a new group in the city offers “meaning, purpose and connection” for those who have struggled with suicidal thoughts or attempts.

The peer-run gathering meets Wednesdays from 6:30 – 8 p.m. on the third floor of the Episcopal Church of the Atonement on Court Street. Individuals ages 18 and older attending the group are asked to use the Hub entrance on the side of the building. 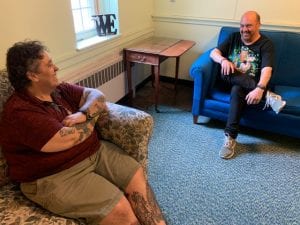 Cindy Marty Hadge and Michael Mansur are co-facilitators of a new Alternatives to Suicide group that meets Wednesdays at the Episcopal Church of the Atonement in Westfield.

The Western Mass Recovery Learning Community (RLC) developed the Alternatives to Suicide groups in 2008, according to Sera Davidow, who serves as the organization’s director.

The RLC creates conditions that support healing and growth for individuals, and the community as a whole, through learning opportunities, advocacy, peer-to-peer support and the development of regional and national networks, according to Davidow.

“The Westfield group was added to our group line-up because we’ve been wanting to offer more in the Westfield area for some time, and that happened to coincide with the Massachusetts Department of Mental Health’s (DMH) recognition that more support for people struggling with suicidal thoughts was particularly needed in Westfield,” said Davidow, adding, “that meant that DMH was able to assist us with some additional funds to make the group happen.”

“We believe that many people contemplate suicide based on what’s happened to and around them,” said Davidow. “We also believe that people who are able to talk openly without fear of penalty are typically not the ones killing themselves.”

Davidow added that for individuals who verbalize their deep despair and other challenges, the threat of hospitalization can still be a barrier to strategizing alternatives.

“Ultimately, we believe it’s important that people have access to this group because being supported to talk about and be together with others in the darkness is often what supports people to find their way through,” said Davidow.

For Mansur, he knows there is a light for anyone who is in search of one. Mansur said he has experienced six suicide attempts over the past three decades as he wrestled with his sexuality.

“I still get suicidal thoughts but have the means to get through it,” said Mansur, who has served as a group facilitator for several years. “I’ve made genuine connections through the Alternatives to Suicide groups and the RLC so I know I can call and talk to someone to get through a particular moment in time.”

For Mansur, he too is that person who can be contacted if someone needs to reach out and just talk and make a genuine connection.

Hadge, who also serves as a lead trainer for RLC, echoed those sentiments.

“Our group is confidential and nonjudgmental,” she said. “There are no lost causes. We believe everyone can recover.”

Hadge said her own experiences over the years with drugs and alcohol led to several bouts of suicidal thoughts.

“There were periods of time when my life seemed hopeless,” she said. “People who held hope for me was really important to my healing.”

Attending a typical meeting includes a brief introduction of the RLC organization and then anyone can talk about “their story” if they wish.

“Some people may come in and just take a seat to listen or to ask for feedback,” said Hadge. “We offer a space for anyone to be still or to cry if they wish. Crying can be healing.”

Mansur added that what is said in the group “stays within the group.”

“People may come and go as they choose,” said Mansur, noting that for men in particular, having a safe space to share their own experience and tell their story is important for their recovery.

“Sometimes it is easier to talk with someone who isn’t a friend or family member,” said Mansur. “Typically in a group there are people who experience great relief sharing their story and making a connection with others who are going through similar instances.”

Hadge added that in a typical group those gathered realize they are not alone.

“We learn a lot from each other because of the trust level that is provided,” she said.