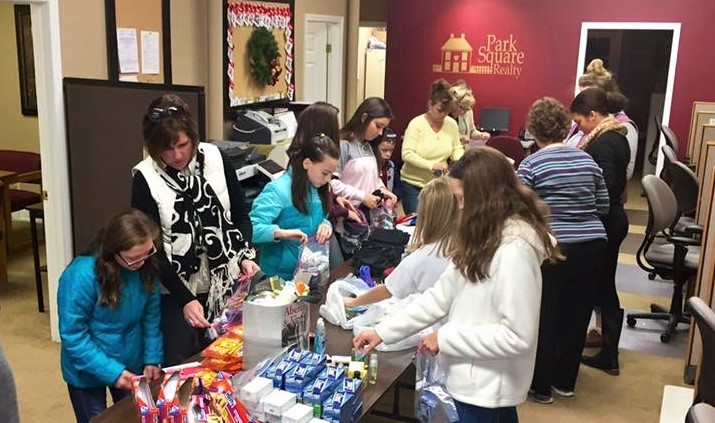 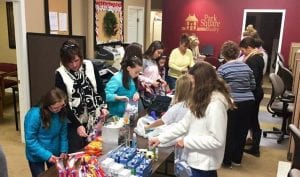 Volunteers create Blessing Bags for residents of the Samaritan Inn during a past event at Park Square Realty. Donations are being collected this week and volunteers are sought to create bags from 12-3 p.m. at the realty office Dec. 7. (Photo submitted)

WESTFIELD – For the fifth year, residents of The Samaritan Inn will be reminded that someone cares, thanks to the efforts of Lesley Lambert.

Lambert, a city resident and realtor with Park Square Realty, began creating “Blessing Bags” five years ago to donate to the Inn. What began as a way for her to personally give back has become an annual community effort.

“I was talking with a friend about giving homeless people money and she mentioned these care packages that she had heard of and said she thought it would be a good idea to have several in the car to hand out,” Lambert said of the Blessing Bags’ origin. “I investigated the idea and decided to host this event so that everyone could take some to have in their cars and the rest I would bring to the Samaritan Inn.”

The first year, Lambert hosted the event in November. 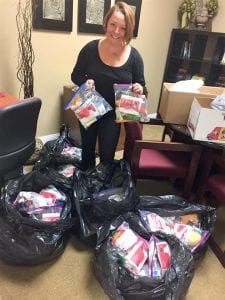 Lesley Lambert displays some of the donations received for the Samaritan Inn in the past. She is collecting donations at Park Square Realty this week for the fifth year. (Photo submitted)

“When I brought the bags to the Samaritan Inn they asked if they could save them until Christmas and that way the residents could wake up to something on Christmas morning,” Lambert recalled. “I found that idea really touching and decided to move the event to December.”

Lambert wasn’t sure what to expect when she opened the event to the public.

“It went so well, and all of the volunteers and donors really enjoyed it,” she said. “That, combined with the obvious need of the area homeless, inspired me to do it again.”

Volunteers are asked to bring a donation and help create the bags, however, you don’t need to attend in order to participate. Anyone can drop off supplies at Park Square Realty any weekday from 9 a.m. to 5 p.m. Suggested items to donate include skin wipes, toiletries, gloves, hand warmers, tissues, gum, toothbrush, deodorant and lip balm.

Lambert said that the Samaritan Inn does not accept food donations. Lambert said all bags would be donated so that homeless residents of the Inn will have a Christmas Eve surprise.