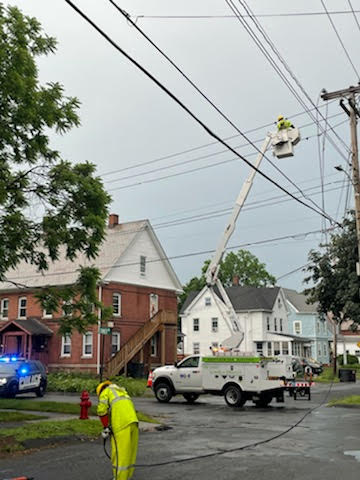 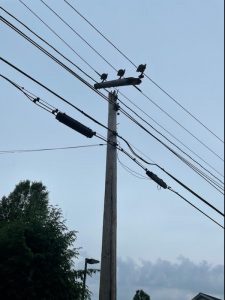 The lightning strike snapped the top part of the pole off of the pole itself, leaving it suspended by power lines. (THOMAS P. FLAHERTY PHOTO)

The lightning struck the pole just before 5 p.m. according to Police Chief Lawrence P. Valliere.

Westfield Gas and Electric General Manager Thomas P. Flaherty Sr. said June 8 that power had been cut temporarily for an area spanning from the Park Square Green to Loring Lane and the Tekoa Country Club. 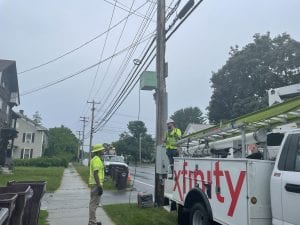 Crews from Westfield Gas and Electric and XFinity work on a utility line June 8, 2021 on Franklin Street after lightning struck a pole and knocked out power. (HOPE E. TREMVLAY/ THE WESTFIELD NEWS)

The WG&E Facebook page shared an image of the top of a utility pole seemingly snapped off from the pole itself, holding on only by 3 power lines.

Flaherty said at 6:45 p.m. that he expected all affected customers to have their power restored within the hour.

The outage also cut power to City Hall, where the first in-person Police Commission meeting in more than a year was to take place at 5:30 p.m.. That meeting was cancelled, and is not expected to be rescheduled until at least after June 16.

The Police Commission was scheduled to interview and appoint one Westfield police sergeant to a full-time temporary lieutenant. Sergeants Douglas LaValley, Michael Gibbons, and Michael Kane are the three candidates seeking the lieutenant’s position. 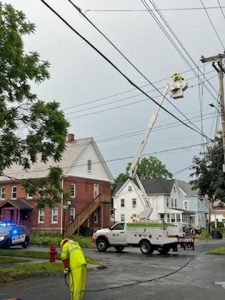 Crews were on scene to fix the pole and restore power within the hour. (THOMAS P. FLAHERTY PHOTO)

Valliere said that he hadn’t even left for City Hall yet when the pole was struck. He said he could see smoke coming from the direction of the strike, adding that he had never heard anything that loud before.