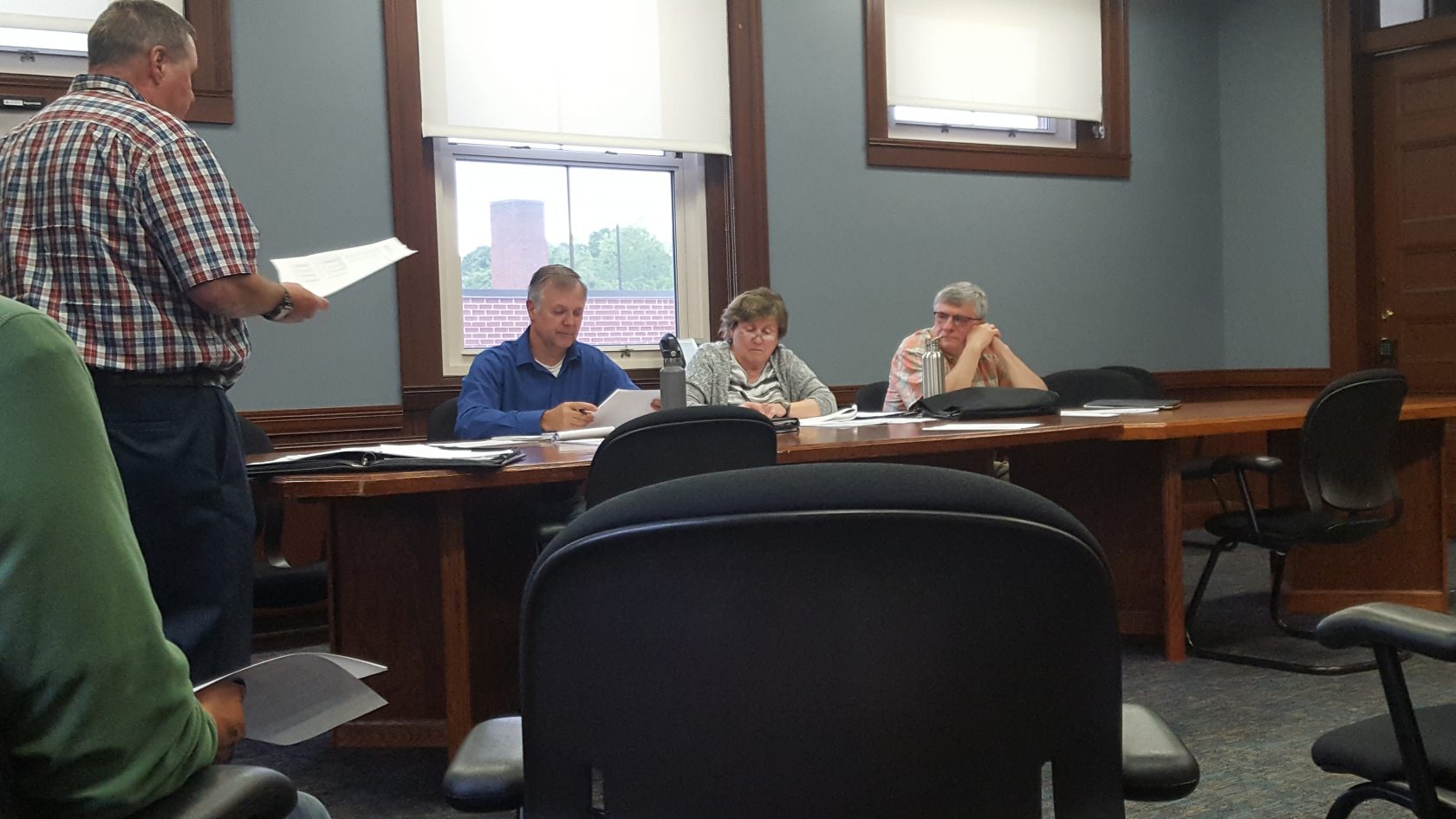 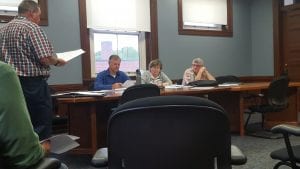 DPW Director David Billips (left, standing) updates City Councilors (from left) Dan Allie, Mary Ann Babinski, and Mike Burns on the quality of the city drinking water and the usage of wells one and two. (Photo by Peter Currier)

WESTFIELD- The Department of Public Works Director David Billips said Thursday the city’s water supply is safe and is running “non-detect” for PFAS chemicals, but resident Kristen Mello suggested there is nothing being detected because not enough water is going through the wells.

The debate surfaced during the Public Safety and Health Committee meeting May 30.

During the public comment portion of the meeting Mello handed out documents that she said proves that the Westfield Fire Department and Westfield Gas and Electric has used the firefighting foam from which PFAS come from. The documents said that the foam was once used in a training session in 2002 on Union Street, near well two. On two pages, the document describes the training as ‘annual,’ which Mello said leads her to believe this foam has been used more than once in Westfield.

Billips said that, while there had been low amounts of contamination measured in the wells, it has remained consistent across each measurement. He said that the family of chemicals in question was identified by the Environmental Protection Agency (EPA) in 2013. In December of 2015, a health advisory was released about the chemicals that prompted the DPW to immediately take wells seven and eight offline. In the meantime, wells one and two remained online as they could feed water to the northern part of the city while seven and eight were off. Well one was then shut down in October of last year to run a temporary system instead. At the moment, well two is the only well running on the North side of Westfield.

Billips added that the water treatment plant for wells seven and eight is expected to be completed this summer. He noted that he and other DPW officials attended conferences on the subject in New England and Washington D.C., during which Billips said Westfield was considered the “talk of the water community.”

“Westfield actually is the talk of the water community across the country for how proactive we’ve been with what we’re doing,” said Billips.

City Councilor Daniel Allie asked about the amount of water going through some of the wells in the month of May. Billips said that more than five million gallons had gone through one of the wells in May alone, due to the higher demand for water as it gets warmer outside. He added that there is no specific date for Well 1 to go back online, as they are focusing on the treatment for wells seven and eight.

Billips said the DPW is trying to receive compensation from those who they believe are responsible for the PFAS contamination. When he was in D.C., he spoke with members of the U.S. Congress who said that they may be able to help. Councilor Mary Ann Babinski said the Massachusetts Department of Environmental Protection offered to help in the event of any new contaminants being identified.

City Councilor Michael Burns suggested speaking with the fire department and WG&E about any past training sessions with the foam. The committee voted unanimously to bring the issue to those departments.

There was a brief argument between Billips and Allie when the councilor referred to what he called the low-use of well two as “suspicious activity,” to which Billips took offense.

“We can run at low demand almost entirely with water from the reservoir. That’s how we prefer to run it because it’s a lot cheaper to run that way,” said Billips, “I don’t know what suspicious activity there is. That is kind of the problem we have with this sometimes.”

Billips reiterated that anyone, including city councilors, should give him a call if they have any questions about the wells and their treatment. Allie apologized for referring to Well 2 usage as suspicious. Babinski suggested that the reports be presented at a City Council meeting, which are broadcast on video, so that more people can be informed of the process.

The committee then discussed an inquiry from Councilor Nicholas J. Morganelli Jr. about the use of the firefighting foam at Barnes Airport. The request seeks to help determine if the Federal Aviation Administration (FAA) requires the testing of the firefighting foam on a regular basis. Babinski said that the FAA stated they do not require such tests. The item was voted to remain in committee for further discussion as they await more details from the airport director.