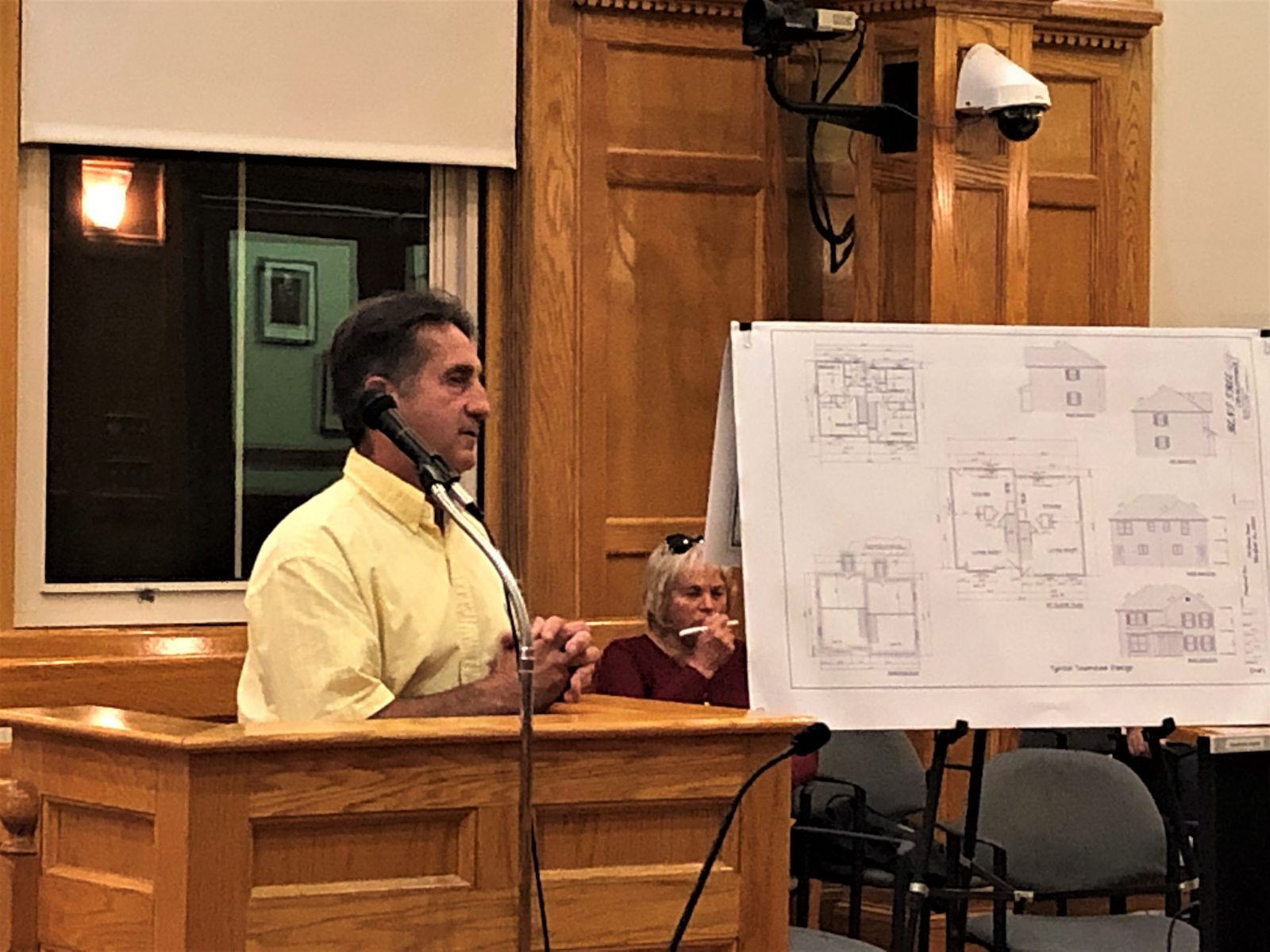 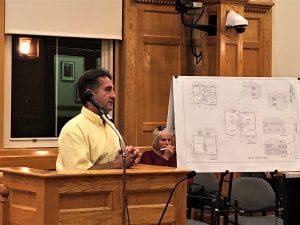 Developer Mark Bergeron discusses his plans for 18 residential units on Union St. at the Planning Board. (Photo by Amy Porter)

WESTFIELD – The Planning Board approved two special permits for multi-family dwellings and a site plan for a vehicle storage/warehousing building at its meeting on Sept. 17.
Continued until Oct. 1 were the special permit and site plan for the proposed Big Y convenience store and gas station at 330 E. Main St., and the release and closeout of the Angelica Estates subdivision.
The special permit to construct a two-family house at 45 Otis St. through the subdivision of an existing lot came back to the Planning Board with a new design, decreasing the width of the planned dwelling as requested. The previous design did not conform to the 15-foot side yard setback.
“You did exactly what we asked, thanks,” said Planning Board member Robert Goyette to owner Wiestaw Sadkowski. The board then voted unanimously to approve the permit with the conditions of the side yard setback and the planting of at least two shade trees on the lot.
The site plan and stormwater permit to construct vehicle storage and warehousing on a 2.7 acre wooded lot on 0 Airport Drive was also approved for storage of three Baystate Concrete Pumping trucks, with potential expansion to a total of five trucks.
The company plans to build a pre-fab metal building with a small office and five bays. Owner Victor Sinigur, who lives in Montgomery, said no vehicle repair would be done at the site, apart from oil changes. He said trucks are washed out at construction sites after pumping. The owner also said no clients would be coming to the building.
Plans also include connecting to water and underground communication services, and installing a septic tank due to the distance from city sewer, according to SVE Engineering, who represented Sinigur.
A 53-foot buffer of existing trees would separate the warehouse from the mobile home park it abuts to the south. No abutters or other residents spoke for or against the plan at the board.
A special permit for a multi-family development at 110 Lockhouse Road also returned to the Planning Board with a new design presented by Rob Levesque of R. Levesque Assoc. for Craig Authier of Chicopee. He said the new design was for six buildings with 12 units. The previous design was for 18 units.
The buildings with be higher-end duplexes with single car garage access.
Addressing previous comments by the board, Levesque said they had added a fence on the north and west sides of the property and vegetation on the Lockhouse Road side.
“They look good,” Goyette said.
Raymond St. Hilaire asked if they had handicap access, which Levesque said is not required as they would be considered townhouses, but added that they could.
No members of the public spoke for or against the plan before the board voted unanimously to grant the special permit.
Levesque also presented a special permit for 18-duplex units at 111 Union St. on behalf of Mark Bergeron, owner of Bent Tree Development.
Levesque said the revised plan, in response to City Planner Jay Vinskey’s comments, had more than ample parking. He said each unit would have stacked dedicated spaces, with visitor’s parking on the site, and all parking out of the front setback zone.
The plan added a sidewalk adjacent to Union Street for pedestrians, and added a fence and a hedge row buffer. Trash will be handled by each individual unit, and bikes stored within the units.
No large pole mounted lights are in the plan. Each unit would have wall mounted lights, with small pole mounted units.
Levesque called the units “cute,” with a living room, kitchen and half-bath on the first floors, and two bedrooms and bath on the second floors.
In response to St. Hilaire’s question regarding the costs of the units, Levesque said they would be market rate. The developer plans to rent them out and eventually sell them as condos.
“It seems cramped to me,” said Planning Board Chair William Carellas, adding that he was also concerned about the proximity of the units to the Full Gospel Church on Union Street.
Levesque responded that units such as these are not readily available on the market and go quickly. He said they will be very attractive, and meet the size requirements. He also said Bergeron had built residential units on the corner of Main and Market Streets that were very well done.
“This one I would feel comfortable staking my reputation on that they would look good,” Levesque said.
During public comment, a couple whose home abuts the planned development expressed their concerns about the added traffic and accidents with the church, with Powder Mill, and with tractor trailers.
“I foresee a lot of accidents with numerous driveways and the church,” they said.
Speaking as a resident, William Onyski told the Planning Board they had a decision in front of them, but that Bergeron was a top-notch builder. “Main and Meadow Street turned out beautifully,” he said.
Levesque had said earlier that he had not yet received stormwater comments from the Engineering Department, and the public hearing on the development was continued to Oct. 1. The plans for the development are available under the Planning Department on the city website at www.cityofwestfield.org, under pending applications.