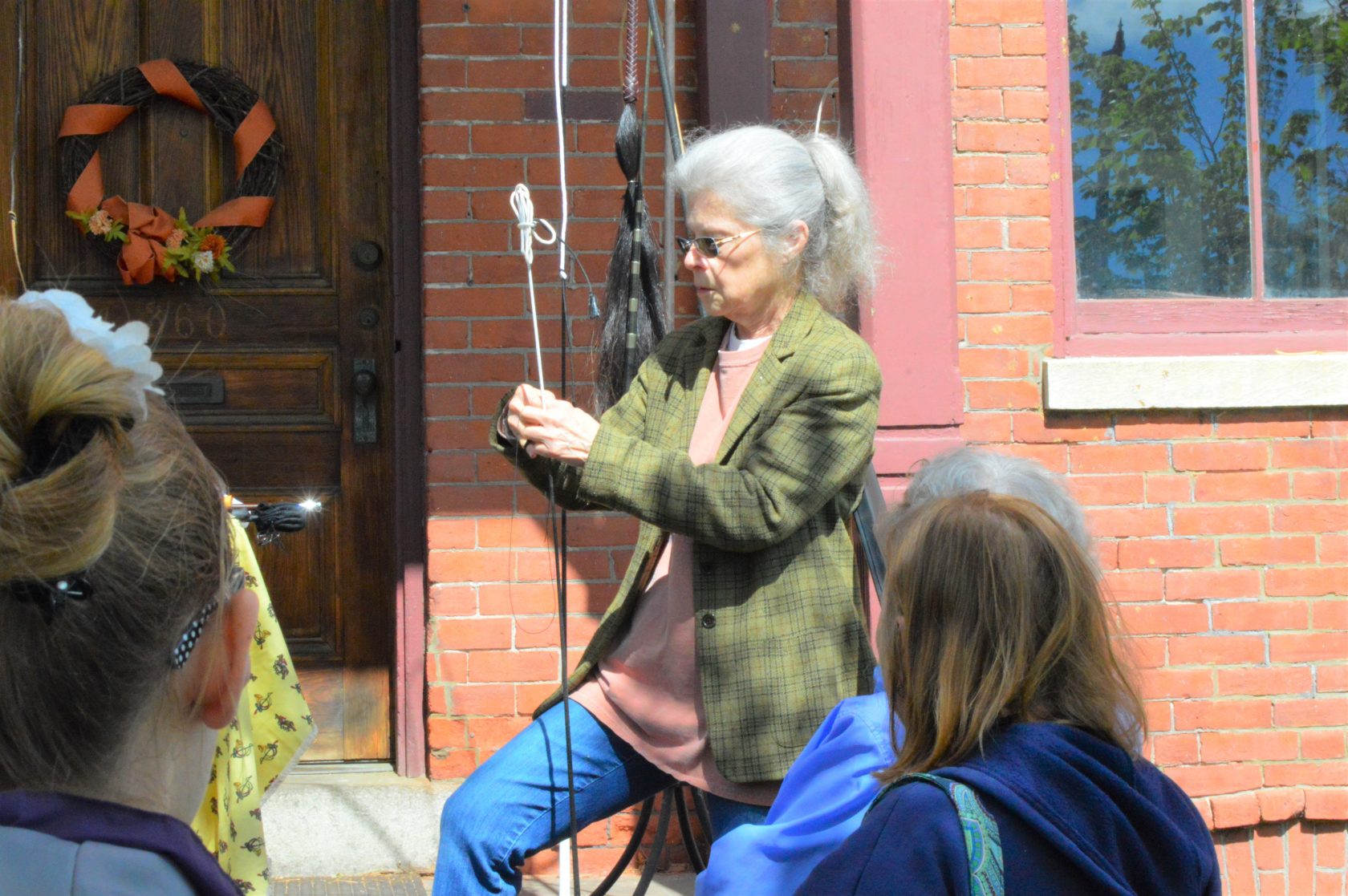 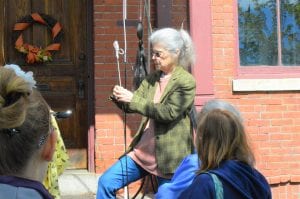 Carol Martin demonstrates the handmade whip-making techniques that were passed down to her by her father during an event May 11, 2019 at the Whip Manufacturing Co. (Photo by Peter Currier)

WESTFIELD- The Westfield Whip Museum held a whip-making demonstration Saturday morning outside
the Elm Street building as a way to display the nearly lost art for which the Whip City is best known.
Museum owner Carol Martin and her apprentice Bonnie Holcomb stood on the steps of the museum
and made whips by hand in front of a crowd of more than a dozen people. While making the whips,
Martin explained the intricacies of what was being done, and the history of whip-making methods in
Westfield.
“We were cutting edge technology in Westfield,” said Martin, “We changed the way whips were made
everywhere.”
Martin explained that at the peak of the industry in Westfield, the concept of assembly lines for whips
had been put to use and manually operated machinery was commonplace. Inside the museum are
many of the same machines that were used in the heyday of the Whip City, and they are still fully
functional. There were once more than 40 whip companies in Westfield in the prime of the industry, but
the Westfield Whip Manufacturing Company, which was established in 1884, is the only one that
remains in the form of the museum.
With any luck, Martin said she hopes to have the museum open to the public by this fall. The only
setback that keeps them from doing so now is having the museum be fully handicap accessible. The only
thing they still need is the funds to do so. The demonstration by Martin and Holcomb was made possible
from a grant by the Massachusetts Cultural Council.

Some people in the crowd made small donations.

One person in the crowd asked if the whip Holcomb has made was what an average whip would look
like. Martin replied that there really is no such thing as an average whip, as there are several different
kinds with a variety of styles that can be made. In Westfield in the 19th and early 20th century, that style
was a straight whip.
Martin said that the inside of the museum is virtually unchanged from the days when it was a fully
operational whip manufacturing company. Despite this, she fears that she bears the responsibility of
preserving what she sees as a lost art. She had learned the craft from her father and is hoping to pass it
along through apprenticeships like that of Holcomb, who began six months ago.
“One of the fears is that there is a break in this chain and the art will be lost,” said Martin, “Many people
in Westfield don’t know that we still make whips.”