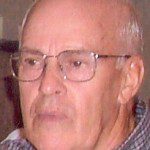 WESTFIELD – Eugene E. Page of Westfield, formerly of Easthampton, MA, died peacefully on Thursday, April 18, 2013. He was born in Holyoke, MA on February 26, 1937, the son of Henry A. and Doris (Lizotte) Page.
He was educated in the Notre Dame Parochial School in Easthampton and Smith Vocational School in Northampton. He was a communicant of Holy Trinity Church in Westfield. He retired from Old Colony Envelope after 38 years of service. He was a member of the Tuesday night rosary group. He enjoyed hunting and fishing with his son and grandson. Eugene also enjoyed making wine from the grapes and raspberries he grew. He loved gardening in his vegetable garden and tinkering with his antique tractors. He enjoyed the company of his family.
Eugene leaves his wife of 56 years, Barbara (Greenier) Page. He also leaves his two children, a son, Jeffery E. and his wife Diane Page of Chicopee and his daughter, Deborah A. and her husband Bernard Dion of Westfield; three grandchildren, Jessica, Melanie and Jonathan Dion; two step grandchildren, Melanie and Stacey; one sister, Maureen Renaudette and his nieces and nephews. He was predeceased by a son, Stephen Page in 1964; three brothers, Erwin, Frederick and Arthur Page and three sisters, Loraine Majowicz, Doris Czepiel and Genevieve Olinski.
The funeral will be held on Thursday, April 25 at 9:00 a.m. from Firtion-Adams Funeral Service, 76 Broad Street, Westfield, followed by a Liturgy of Christian Burial in Holy Trinity Church at 10:00 a.m. Burial will follow in St. Mary’s Cemetery. Calling hours will be held on Wednesday from 4:00-7:00 p.m. at the funeral home.
In lieu of flowers, donations in Eugene’s memory may be made to Holy Trinity Church, 335 Elm Street, Westfield, MA 01085.
firtionadams.com