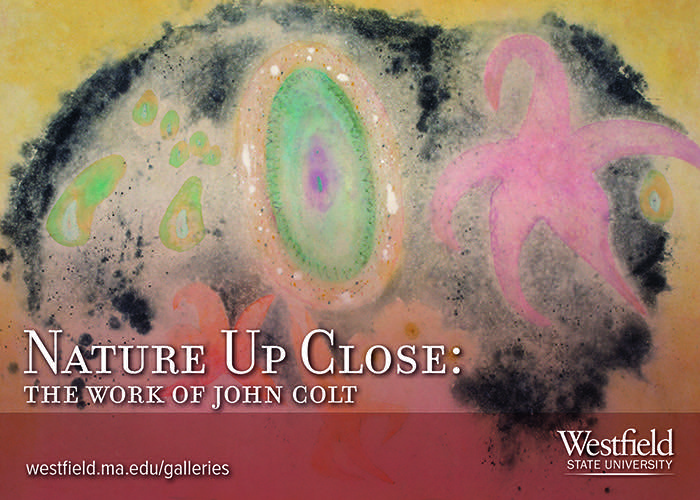 WESTFIELD – The Westfield State University Arno Maris Art Gallery will host an artist reception for the exhibit “Nature up Close: the Work of John Colt” on Thursday, September 24 from 5:30-7 p.m.
Featured artist John Colt (1925-1999) was introduced to art at an early age by his parents artists Mary and Arthur Colt who ran the Colt School of Art in Madison, WI. After serving in the U.S. Navy, Colt earned his bachelor’s and master’s degree in art from the University of Wisconsin and eventually became a faculty member at the university.
Preferring to work with paint and canvas, Colt was largely inspired by nature. His artwork often portrays elements of the natural world with abstract qualities including luminosity and delicate lines and shapes.
Colt’s artwork has been recognized in a number of ways. He was the recipient of the top award at the Walker Biennial at the Walker Art Center (1966), and was honored with the Top Award from Wisconsin Painters and Sculptors (1973). His paintings have been published in The New Yorker, Artforum, and Art in America.
Colt’s artwork hangs at a number of institutions including the Milwaukee Art Museum, the Wright Art Museum, and the Madison Museum of Contemporary Art. A native of Wisconsin, Colt moved to Amherst, Mass. after retiring from teaching and remained there until his death in 1999.
Colt’s wife Ruth Kjaer will be at the opening reception to answer questions about his artwork, inspirations, and lifetime achievements.
Colt’s artwork will remain at the gallery until October 17. The Arno Maris Gallery is located on the second floor of the Ely Campus Center. Admission is free. Regular gallery hours are Tuesday-Friday, 2-5 p.m. and Saturday 1-5 p.m. The gallery is closed on Sunday. For more information, please call the gallery at 413-572-4400.