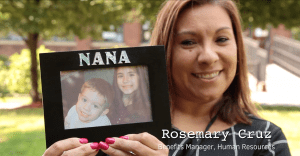 If you’re looking for a classic success story— somebody who has worked their way up the ladder— look no further than Rosemary Cruz. Now a manager at BHN’s corporate office in Springfield, Rosemary began as a receptionist at BHN 21 years ago. Through her years of hard work, dedication, and “passion for human interaction” as she puts it, Rosemary is an authentic example of the American success story.

Born and raised in New Jersey, Rosemary moved to western Massachusetts roughly 30 years ago to begin her career in a field that exposed her to working with people. In 1996, Rosemary joined BHN as a corporate receptionist/administrative assistant in Springfield. During her three and a half years in this role, Rosemary learned as much as she could about BHN’s mission and values through her daily interactions with employees of all different backgrounds. Ultimately, it was this “interaction with people that drew me in.” Eventually, there was a job opening for a Human Resources Assistant position, which she applied for and was accepted. According to Rosemary, “The front desk worker in me has always enjoyed meeting new people and helping out whenever I could, so HR seemed like the right fit for me.” Over the next several years, Rosemary earned a series of promotions within BHN’s HR department, which took her from HR Assistant, to HR Generalist, to HR Specialist, before accepting her current role as Benefits Manager in 2015.

So, how did she do it? Her appetite for learning may be the secret to her success. In her words, “I welcomed training opportunities and had a willingness to learn all there was to know about HR…these learning opportunities ultimately led to promotions over the years at BHN.” In addition to learning about BHN’s many roles and functions, Rosemary was also intrigued by events happening in the HR field. For example, during her time as an HR assistant, she describes her interest in learning more about employee benefits and leave administration after recognizing that these two areas were changing and evolving as a result of changes in law and policy on a national scale. Looking back and reflecting on her past experience, Rosemary believes that the more ‘tedious’ tasks assigned to her when she was first starting out empowered her to learn about the organization from the ground-level up to its overall mission.

In her current role as Benefits Manager, Rosemary is responsible for the day-to-day operations involving benefits and leave administration, worker’s compensation, employee accommodations, workplace wellness initiatives, management training, and employee relations. She oversees a team of 11 HR employees providing a wide array of services to BHN staff and prospective employees. Rosemary spends much of her time on employee benefit packages due to their complexity. “Past experience has shown that employees find their benefit package difficult to understand, especially with complex deductibles and co-insurance in addition to co-pays on certain plans,” she says, which, in her words, “can make the health selection process stressful.” In order to simplify the process, Rosemary and her team take the time to sit down with employees to walk them through their benefit package, breaking down each part of the plan in a way that makes sense. As a result, she and her team “have found that [employees] are becoming better educated consumers around making healthcare choices for themselves and their families.” Additionally, at the end of each year, her team reviews all of their current packages, measuring ways to remain competitive within the market.

Though she attributes much of her success to her “thirst for learning,” perhaps of equal importance is her natural ability to develop meaningful human connections. When asked about what her favorite part of her current role is, without hesitation she answers, “The opportunity to connect with our employees each and every day.”