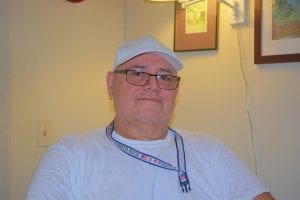 Therapy was never something Miguel had considered before he came to BHN. So, when he was referred to counseling services after receiving help at BHN’s Crisis Center, Miguel didn’t think talking to a therapist would ease his anxiety, depression, or emotional instability. But after receiving counseling services for the past nine years, Miguel can confidently say that BHN has had a deeply meaningful impact on his mental wellbeing.

At BHN The Carson Center, Miguel regularly meets with his therapist, who has given him the skills and resources he needs to take control of his mental health. Before he began receiving counseling services, Miguel says he struggled to control his emotions, especially his anger and anxiety. He often had emotional outbursts and would take his anger out on other people because he didn’t know how to control spikes in his emotions. With his therapist’s help, Miguel has learned different techniques to help work through his emotions in a healthier way.

Self-calming strategies, such as counting from one to ten to lessen anger and panic or turning on a sink to be soothed by the sound of running water, have been instrumental in Miguel’s ability to maintain control over his emotions. After learning about these techniques, he has even felt empowered to create his own calming methods.

“I’ve learned so many skills here to help me to decrease my anxiety, and now I can use these skills to do it myself,” Miguel says.

Counseling has also helped Miguel improve his ability to communicate with others, which is something he struggled with in the past due to his shy nature. “Before, I felt like I was in a bubble,” Miguel says. “Now, I’m coming out of that bubble to communicate with people, little by little.” He is also less affected by other people’s moods, which used to impact his mood and fuel his emotional outbursts. With therapy, he has learned how to walk away from negative people or stressful situations in order to maintain emotional balance.

BHN’s services have allowed Miguel to make profound changes in several aspects of his life. With the help of his therapist, Miguel has learned how to curb the intensity of his emotions and manage his anxiety and depression. Though, at first, he didn’t believe therapy was for him, at BHN Miguel discovered a system of support and compassion that has provided him with a powerful sense of self-determination.

“I feel good coming here because I feel safe to talk about my anxiety and depression,” Miguel says. “Coming here has helped me take control of my emotions and anxieties. They’ve helped me a lot, and I’m doing much better.”