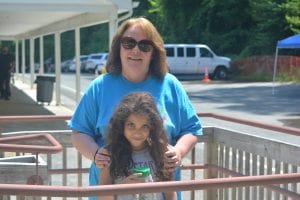 BHN’s Kamp for Kids™ offers children with and without disabilities a unique and fun summer camp experience. From July through August, Kampers are given the opportunity to explore a variety of engaging activities—from arts and crafts, to sports, to outdoor education—in an environment that promotes inclusion and personal growth. Dawn was introduced to the program through a student with disabilities she worked with in the school system, and instantly fell in love with Kamp.

“This is the perfect environment, where kids can learn important skills but still have fun,” Dawn says. “They learn a lot through Kamp that can’t be taught at school.”

After her first experience at Kamp, Dawn signed up her four youngest children to attend—three of whom have autism, and one who has bi-polar disorder. After their first summer at Kamp, her children were equally enthusiastic about the program as Dawn and couldn’t wait to return the following year. “They ask me in December when Kamp is going to start,” she says. “And I look forward to it, too.”

Then, when Dawn and her family moved hundreds of miles away, she and her children felt as if they were missing a key piece in their lives without Kamp— so much so that Dawn made the decision to return to Westfield so she and her family could continue attending Kamp for Kids™. None of the programs in the area she moved to compared to Kamp, and her children struggled without the opportunities for growth and personal expression that Kamp offered them. Dawn, too, was unable to find a program that was as fulfilling to work at as Kamp.

With Kamp’s help, Dawn’s children have been able to strengthen several areas of their development, particularly their social skills. Dawn says her children have difficulty trusting adults they’ve never met due to their past traumas, and Kamp has given them the opportunity to meet several adults who have helped them rebuild their trust. Her children also formed connections with other Kampers, which has helped them work on their social skills involving people their own age. But the most important aspect of the program in Dawn’s opinion is that Kampers are allowed to have fun while they learn, unlike many camps offered for children with disabilities.

“Most of the camps offered are academically-focused,” she says. “But it’s their summer too—they should get to enjoy it.”