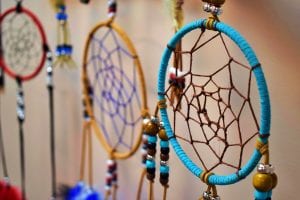 WESTFIELD – Carmen Quinones recognizes the therapeutic role art can play in people’s lives. As an artist herself, she is able to overlook her anxiety and live a calmer, happier life.

It was this view of art that inspired Carmen, the assistant program director for Behavioral Health Network’s Adult Community Clinical Services program (ACCS), to organize the “This is Me—End the Stigma” art show. Many ACCS program participants use art as a powerful form of self- expression and a way to cope with mental illness, and Carmen wanted to give them an opportunity to offer the world a glimpse of their true selves and use their art to tell people, “This is me, and this is what I can do.”

Michelle Sutton, one of the individuals involved in the art show, uses photography as a form of healing and recovery. After being diagnosed with multiple sclerosis, and later breast cancer, photography became a way for Michelle to stop and appreciate the small things around her. Her multiple sclerosis prevented her from doing many small, everyday things – “It caused my whole life to come to a stop – I couldn’t function.” Taking photos, however, became a form of therapy for her. 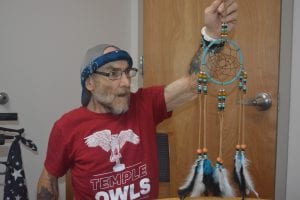 Several of Michelle’s photos have deeply personal significance, such as a seemingly inconsequential photo of a fence. However, the photo captures the view from her bedroom, a sight that served as a form of hope for Michelle when she was often confined in bed throughout her recovery. It said to her, “This is where you are – you’re going somewhere, and you’re not stuck in this spot.” In Michelle’s experience, her physical and mental illnesses have caused people to treat her differently; but having her photos hung for the public to see was an empowering experience, she says, and made her feel seen and understood.

Michael Bruneau, another ACCS participant, created a piece representative of his increasing ability to cope with his anxiety and limited mobility: three dream catchers hanging from a piece of wood. Creating dream catchers has been a significant part of Michael’s life for the past few years and has helped him through a dark place, he says. Though he’s always loved art, Michael was forced to stop painting and drawing when he developed age-related hand tremors. Largely housebound and without a creative outlet, Michael became socially isolated and his anxiety spiked. However, after BHN helped him move into fully- accessible housing, Michael was introduced to the art of creating dream catchers by one of his neighbors, Angela.

“I didn’t think I would be able to make dream catchers,” Michael says. “But I started working on them, little by little, and once I finally made one, I felt proud of myself. I felt some relief.” Michael says he’s glad he refused to give up on art and found a new art form to pursue despite his physical limitations: “It drives my spirit, and I get joy from it,” he says. “I had goosebumps seeing my art on display, and I couldn’t have done it without other people.”