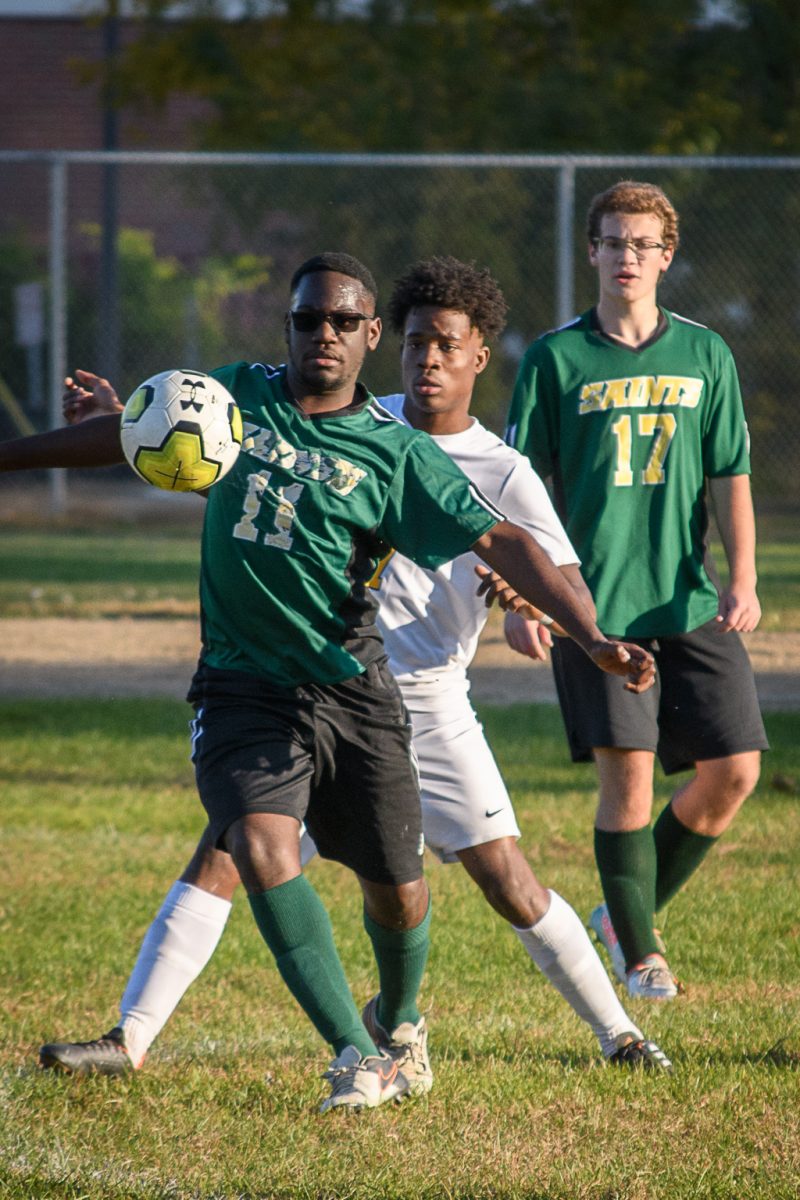 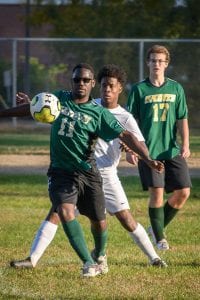 WESTFIELD – The St. Mary’s High School boys soccer team delivered a sensational effort against visiting Putnam Tuesday, surviving 80 minutes of a hard-fought battle to win 3-2.
Jack Lamirande helped St. Mary’s establish a 2-0 lead through the game’s first 40 minutes, setting up a goal for Brady Collins in the second minute and scoring at the 38-minute mark off a pass from Colin Ramos.
Putnam countered with a strong second half, scoring three minutes on Eduar Bravo’s goal. Play was fairly even throughout with both teams attacking. The Beavers tied the game midway through the final half on a goal from Akeem Henry.
St. Mary’s had one more answer though. The Saints responded with a great low outside shot by Collins that found the back of the net. Joe Lucardi assisted.
“We’re moving the ball with more purpose and creating attacking runs,” said St. Mary’s boys soccer coach Andy Lussier, noting a more concentrated effort at practice over the last week or so. “Things are starting to break for us and we’re controlling the game pace.”
Lussier said Mick Gregoire, Aiden Burke, Jack Masciadrelli and Mark Nelson were critical in stopping Putnam runs and helping to control the middle of the field.
St. Mary’s goalie Hayden Lussier finished with 11 saves.

Westfield 2, East Longmeadow 1
Westfield avenged a 4-0 loss to East Longmeadow with a key road victory in the rematch.
“The kids worked hard in training the last couple of days and executed our shape well,” Westfield boys soccer head coach Andrew Joseph said.
Westfield’s Nichita Solopa pressured East Longmeadow’s center-back and goalkeeper into a mistake, burying a shot into the net about seven minutes into the second half. Midway through the half, the Bombers made it 2-0 when Jack Keeney, on the wing, took a pass from Jack Keeney and converted.
East Longmeadow scored with 11 minutes remaining, but Westfield iced the game.
Westfield improved to 4-6-4. The Bombers return to action against league foe Northampton Friday at 6 p.m.

GOLF
Westfield 160, Agawam 167
Westfield improved to 11-1 with a win at Oak Ridge Country Club. Adam Blair and David Tirrell led the Bombers with a 39. Colin Scanlon and Anthony Schabowski each shot a 41.

FIELD HOCKEY
Southwick 12, Palmer 0
Southwick’s Emily Martin had six goals and two assists to pull within one point of her career 100th and lead her team to victory. The Rams are just one win away from qualifying for the postseason.
Alex Grimaldi continued her ascent to become a true scoring threat, finishing with two goals and three assists. Avey Glynn scored two goals, and Marisssa Ouellette and Marissa Longhi each had one.
Julia Rowley had two assists. Devan Fox and Marisa Coviello had one apiece.
Southwick goalie Clare Stratton (1 save) recorded a shutout.
“Stratton organized her defensive unit well,” Southwick coach Jenn Oakland said. “They were effective.”
In addition to allowing just one shot on goal – a second-half attempt – Southwick’s defense also gave up no penalty corners.
In JV action, Southwick received two goals apiece from Madison Herbert and Sam Pitoniak and one from Abby Chavalier to silence Palmer, 5-0. Emma Cheffer had two assists, and Paisley Suares, one.
Southwick keeper Ezri Johnston (1 save) earned a shutout.