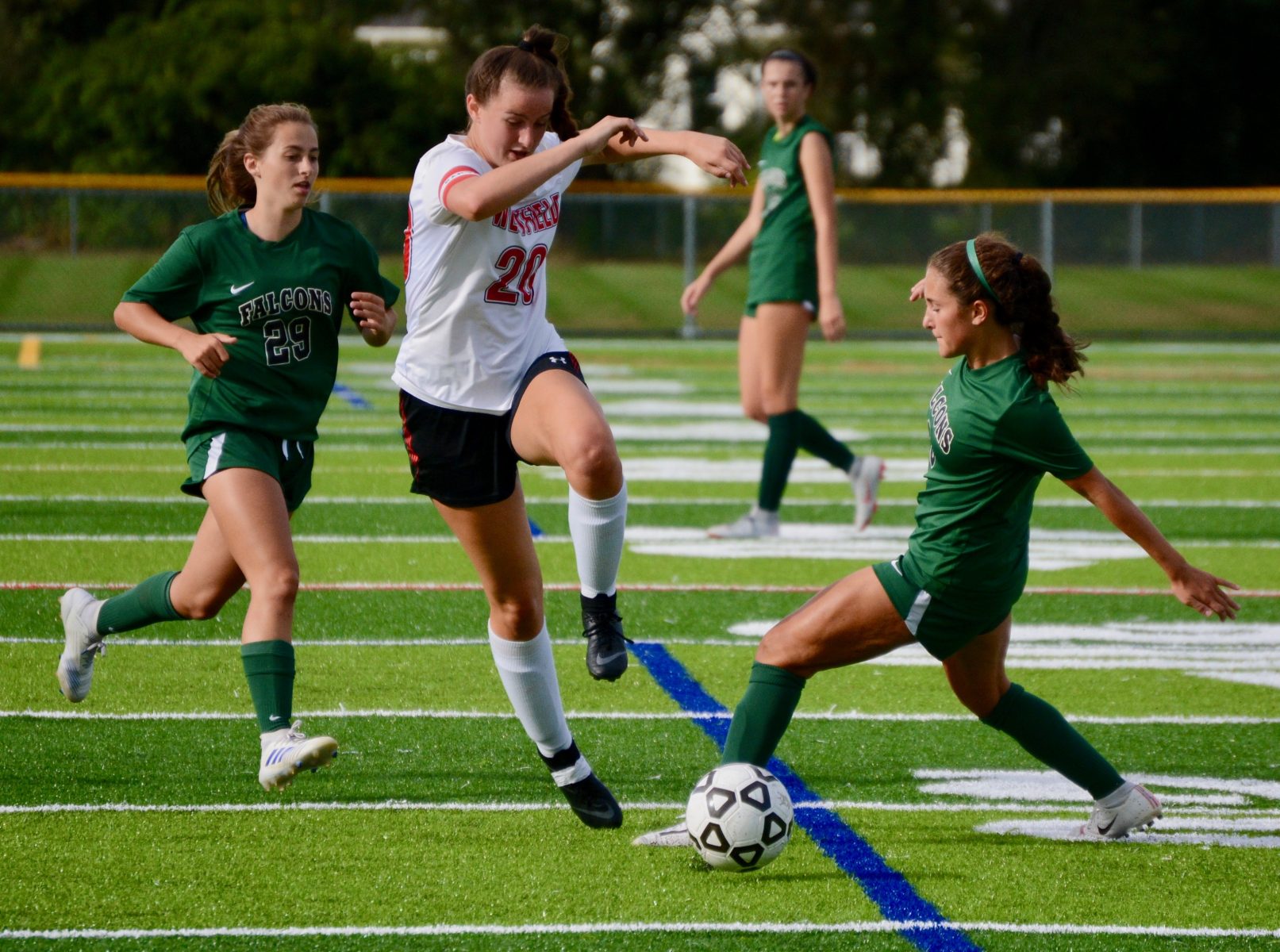 WILBRAHAM – Round One goes to the Minnechaug Falcons.
A potential championship preview between a pair of high school girls soccer unbeatens went the way of Minnechaug Tuesday as the host Falcons slipped past the Westfield Bombers 1-0.
Emily Howard scored the game-winner, taking a pass from Gaby Williams and hammering home a goal with 26:51 remaining in the first half.
Minnechaug improved to 7-0; Westfield fell to 6-1. 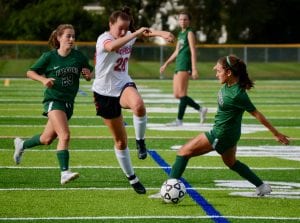 “We got to see what Minnechaug has to offer,” Westfield girls soccer head coach Keith Saltmarsh said. “They played good soccer. I thought our possession was pretty strong as well, but they’re strong in the back. It’s a challenge to break them down.”
Every one-on-one encounter between the two opponents turned into a fierce battle for the ages.
“It was a good way to see how they play, and to plan for the future,” coach Saltmarsh said. It was good competition. We had our chances; they had their chances. They ended up burying their one really solid chance to get it when they got in.”
Minnechaug attempted to tack on some insurance in the second half but Westfield’s defense prevailed. Katie Shea’s shot went wide for the Falcons with about 30 minutes left in regulation and Westfield goalie Adrianna Arona (7 saves) blocked another shot of hers two minutes later.
“Adriana made a couple really strong saves to keep us in,” coach Saltmarsh said.
Westfield put forth some heroic individual efforts in the final 20 minutes:
Emma Pedolzky attempted a give-and-go only to have the play broken up by the Minnechaug defense;
Then, Chandler Pedolzky tried to slip a low liner into the net, but the ball was corralled by Minnechaug goalie Katie Russell (11 saves);
Catie Bean lofted a ball toward the net from about 40 yards out, but Russell saved it;
A high floater from Kaela Mochak was also plucked out of the air by Russell;
Emma Pedro made a strong run from midfield into the box before a shot and save were made with less than two minutes remaining;
And, Mochak took a through ball and made a kick from in close in the waning seconds only to have it swallowed up again by the goalie.
“I’m not happy we lost, but I’m happy with the performance,” Saltmarsh said. “We will continue to get better. …This is the level we need to play it, and just continue to get better.”
Westfield returns to action Friday at Ludlow High School at 6 p.m.

BOYS SOCCER
Pioneer Valley Christian Academy 2, St. Mary’s 1
Alun Bekk had a goal and an assist in the second half, and Pioneer Valley Christian Academy held off St. Mary’s.
PVCA got on the board less than two minutes in the second half when Kobe Ferrara scored off a pass from Alun Bekk. Bekk took advantage of a miscue from St. Mary’s made midway through the second half and made it 2-0.
Jack Lamirande scored unassisted on a breakaway to get St. Mary’s on the scoreboard.
“The Saints still played hard and made several good runs but it wasn’t (enough),” St. Mary’s boys soccer coach Andy Lussier said. “We are a better team than how we are playing right now. We have several good things going and just need to fill in some gaps that we still have with game play.”
St. Mary’s goalie Hayden Lussier finished with nine saves.