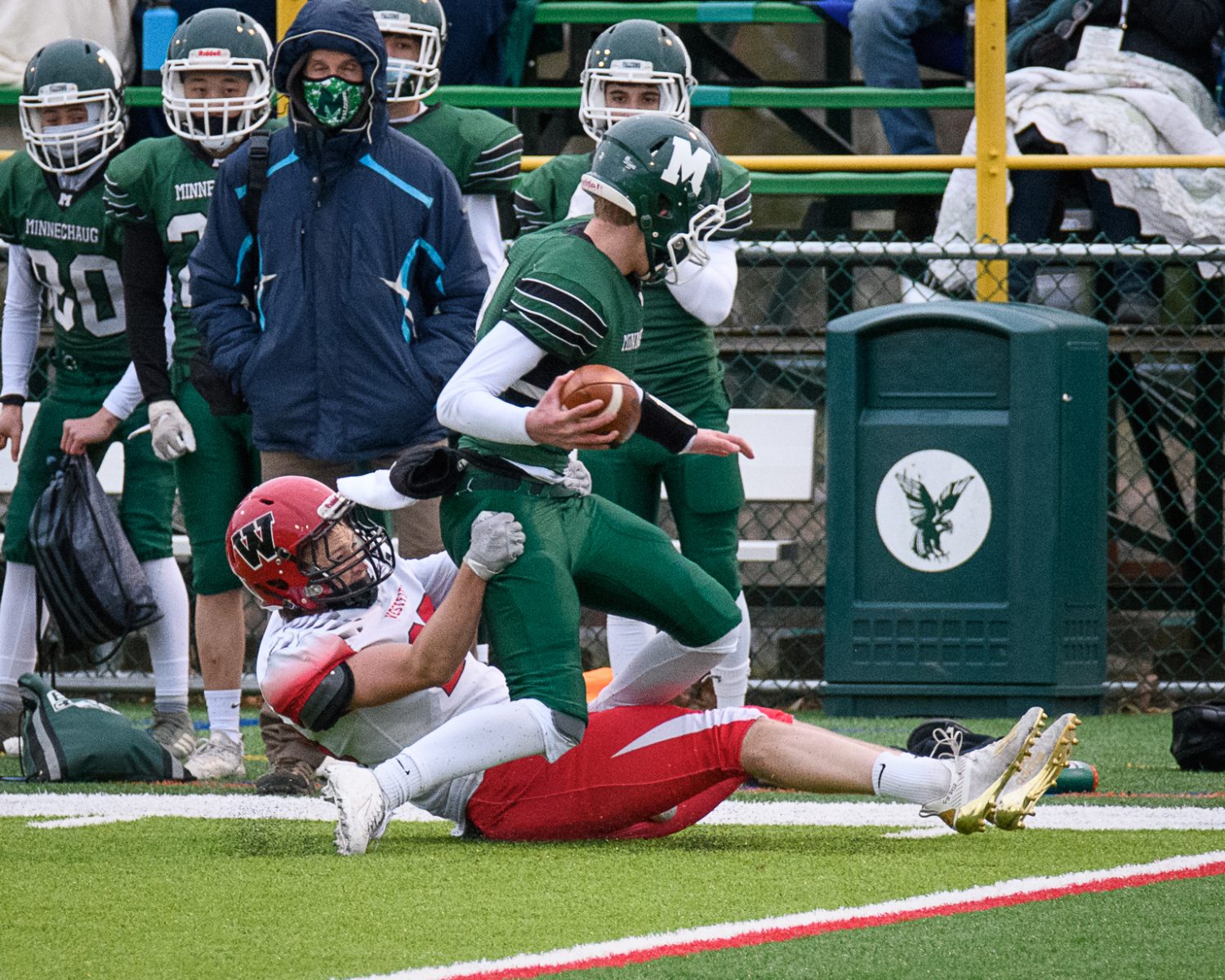 WILBRAHAM – Friday night’s matchup of highly-ranked high school football teams was supposed to be a game we would all be talking about when it was all said and done.
The Westfield Bombers came into the game ranked #2 in Western Mass, and the Minnecahug Falcons #3. It turned out to be a game that the Bombers would just like to forget.
Minnechaug took advantage of an early Westfield miscue en route to a 28-0 win at Minnechaug High School.
Westfield received the opening kickoff and began the game on its own 32 yard line. On just the second play of the game, just 30 seconds in, Minnechaug’s Dom Mazzuca intercepted Matt Adamites’ first pass and returned it to the Bombers 5 yard line. Two plays later, Falcons running back Ryan McConnell scored from one yard out to open the scoring. The point after made it 7-0. 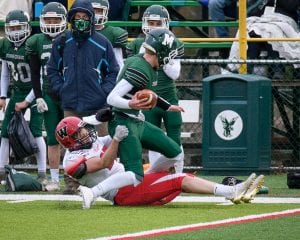 Westfield again took over after the ensuing kickoff for their second drive of the ballgame. After gaining a first down and advancing up the field, Adamites threw his second interception, turning the ball back over to the home team.
Minnechaug quickly took advantage, scoring on the fourth play of the drive on a 5 yard run. After the successful extra point, the Falcons led 14-0 with 5:28 to go in the first quarter.
Both team exchanged punts to finish out the quarter with the hosts leading 14-0.
To begin the second frame, Westfield had possession of the ball and chose to go for it on fourth down with the ball inside Minnechaug territory. Adamites’ pass fell incomplete, giving the ball back to the Falcons.
On the next possession, Westfield’s Hunter Cain came up with the first of two sacks on the night, pinning Minnechaug back in its own territory, forcing a punt.
After exchanging the ball back and forth on downs, Minnechaug punted to Westfield and the ball was downed inside the Westfield 1 yard line, pinning the Bombers deep in their own territory.
Ryan Cimini was able to gain 11 yards on a running play, giving his team some breathing room. On the next play, the Minnechaug defense intercepted another Bombers pass. Two plays later, the Falcons scored on an 18 yard pass from Jeremey Diehl to James Jolicouer. The PAT made it 21-0 with :47 remaining in the half. Westfield ran out the clock to end the half.
The Westfield defense provided a much needed spark to start the second half.
Minnechaug received the second half kickoff and was stopped on downs by the Westfield defense, forcing a punt.
Westfield mounted an 11 play drive, moving the football to the Minnechaug 24 yard line. On fourth down, Adamites took off after breaking a tackle behind the line of scrimmage, but was just short of a first down. Minnechaug took over on downs to end the third quarter ahead by 21.
To begin the last period, Minnechaug completed a 29 yard pass, moving the ball to the Westfield 30 yard line. A few plays later, Falcons’ McConnell ran untouched 10 yards for his second score of the night. The extra point made the score 28-0.
Westfield was able to move the ball on some good running by Cimini and Nicholas Bates, but was unable to find the end zone. After gaining the ball back on downs, Minnechaug ran out the clock, earning the win 28-0.
Westfield QB Matt Adamites finished 12-of-29 passing for 124 yards and three interceptions. Cimini was the leading Bomber rusher with 61 yards on 13 carries, William Brewster caught five passes for 46 yards. Michael Collins added two catches for 39 yards. After a week off due to a game cancellation, Westfield fell to 1-1.