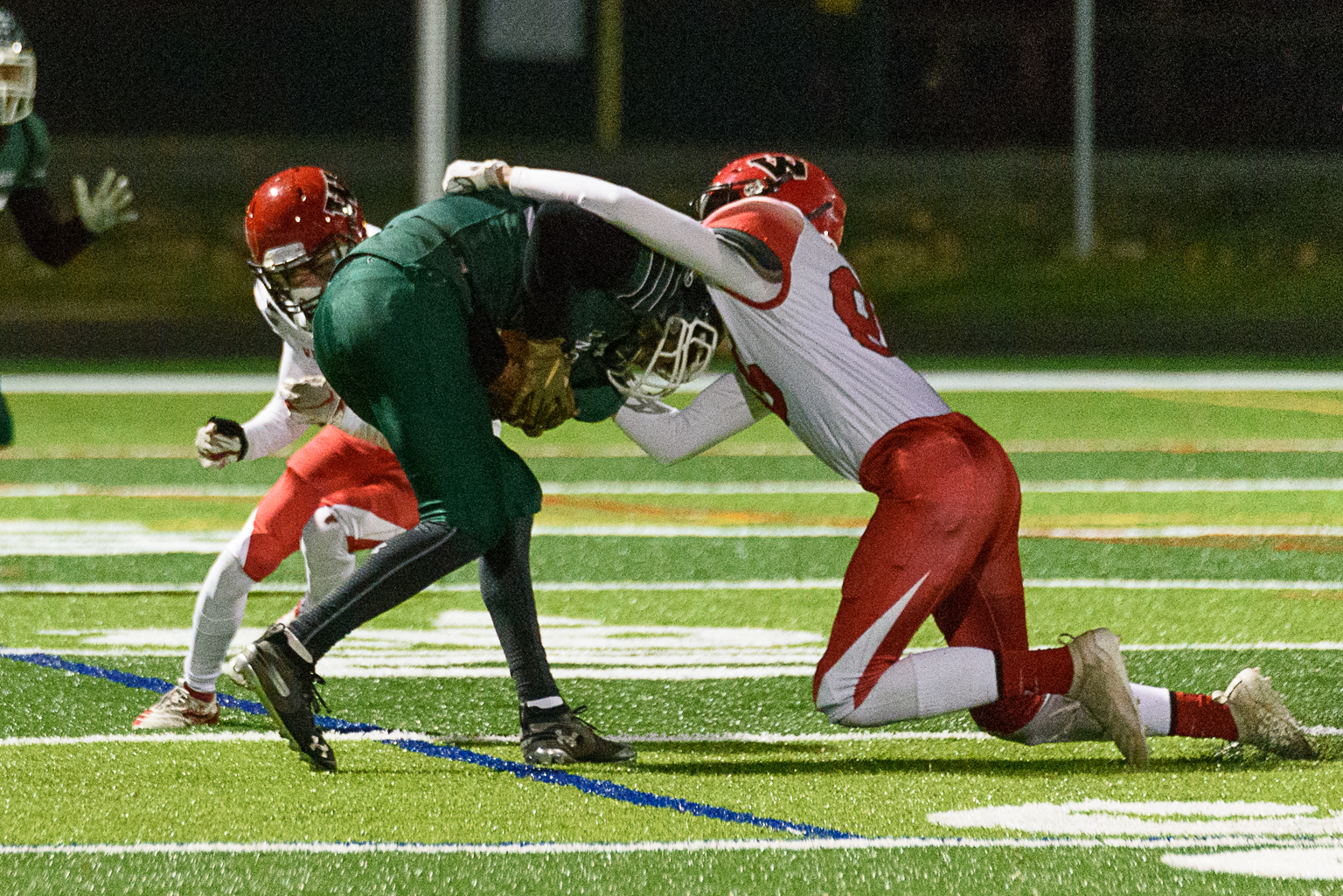 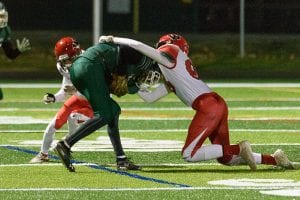 WILBRAHAM – If Westfield never has to face Minnechaug again this year, I am sure that would suit them just fine.
For nearly 24 hours, Westfield’s kryptonite was the green-jerseyed Minnechaug Falcons. On Thursday night, the Minnechaug girls volleyball team rallied past Westfield in a dramatic five-set semifinal. At the same time, the Falcons gymnastics team was completing a championship performance at the west sectional finals, finishing one spot ahead of the runners-up Bombers.
Minnechaug got the best of Westfield again on Friday night, scoring a touchdown in each of the first two quarters of a West Division 2 football semifinal before tacking on two more late in the second half of a 28-0 shutout.
The top-seeded Falcons improved to 8-1. No. 4 Westfield fell to 5-4.
“We had guys in the right spots,” Westfield football head coach Rob Parent said. “We just didn’t finish.”
Westfield opened the game with the ball first, driving to midfield before stalling out and punting to Minnechaug. The Falcons took the ball and drove 65 yards in six plays, capping it all off with a beautiful 20-yard touchdown pass from senior quarterback Anthony Izzo to senior wideout Alex Henry. Henry backpedaled into the back of the end zone, catching the ball in stride to make it 7-0 with 5:49 left in the opening quarter.
After a couple of empty possession for both sides, Minnechaug forced a key turnover, scooping up a Westfield fumble just inside the 30-yard line and returning it all the way to the 2. Falcons senior running back Joey Mauer plunged into the end zone with 5:22 remaining in the half.
Westfield attempted to get back into it in the second half. The Bombers put together a promising drive on their second possession of the third quarter, moving the ball all the way from their own 11-yard line to Minnechaug’s 28 before turning it over on a fumbled exchange just as the fourth quarter got under way.
Minnechaug’s next possession resulted in another touchdown, this time coming from one yard out on a short run by senior running back Michael Talaia.
Another Westfield turnover in the closing minutes resulted in another short TD run, this one by senior running back Landen Gore.
After the game, Parent said he hopes his players “remember, learn and grow” from Friday night’s result. Westfield will play one more game before returning to Wilbraham to face Minnechaug again on Thanksgiving morning. The Falcons will first have the unenviable task of attempting to slow the Central Golden Eagles in the D2 championship game.