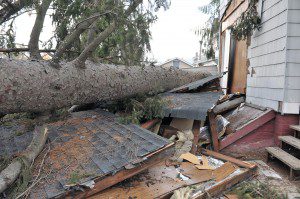 Debris from a spare bedroom of a home located at 26 West School Street in Westfield can be observed under a large tree that fell at 5:45 Tuesday morning. The tree belongs to a nearby neighbor. No one was injured in the early morning accident. (Photo by chief photographer Frederick Gore)

WESTFIELD – Crystal Vazquez is angry.
Not only did a tree fall on her house, crashing through a bedroom, but after more than two days, she still has no answers as to when it will be removed.
Vazquez, who lives on West School Street, said the tree belongs to a neighbor, and a second tree on that property is leaning and could come down at any moment.
The tree crashed into her home around 5:45 a.m. Tuesday, Nov. 13.
“I just got out of bed and my husband had left for work five minutes before,” she said.
Luckily, her 11 year-old was already up and her other children, ages six and three, were not in harm’s way.
Vazquez and her family – which includes her sister and her five month-old baby who live in the first floor apartment – were spared from injury but their home was not.
“It crashed into our back bedroom and we lost the room,”  she said. “I kept my stepfather’s military items in there after he passed away and I was told not to touch anything.”
Vazquez said despite numerous calls, she was unable to get any immediate action from the insurance company for her house or her neighbor.
“My insurance agent is finally coming tomorrow morning,” she said Thursday afternoon. “And I hadn’t heard anything from my neighbor since it happened until after the photographer from the paper was here today.”
Vazquez said in addition to the tree that fell, a second tree on the same property is now leaning on her house and she is afraid if it comes down, it will be even more devastating.
“Right now our kids are sleeping in the living room because I’m afraid the other tree will come down on their rooms,” said Vazquez.
Although Vazquez’ husband tried to board up the home to keep the cold air out, it is still cold and unsafe.
“Every day that goes by I get more mad,” she said. “When the electric company came out the day it happened they said the trees should be cut right away and it’s two days later.”
Vazquez said her neighbor did have a tree removal company look at the situation and it was estimated at $4,500 to remove the tree that fell on the bedroom and another several thousand dollars for the second tree.
“And it’s not just us,” Vazquez said. “The top fell onto another neighbor’s house and it crashed through a garage.”
Vazquez said she and the neighbors have known the trees needed to come down for some time.
“We moved in last year the day before the hurricane and were worried they would fall on us,” Vazquez said. “And with the last hurricane, we actually moved everything out of our bedroom because we thought it would come through there.”