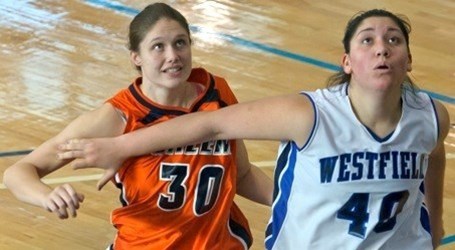 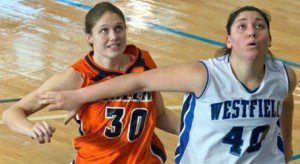 Junior center Gabby Felix was dominant inside with career highs of 27 points and 20 rebounds in a key 61-53 MASCAC victory at Bridgewater.

BRIDGEWATER – Junior center Gabby Felix (Springfield, Mass.) notched a double-double with a career-high 27 points and 20 rebounds to lead the Westfield State University women’s basketball team to a 61-53 Massachusetts State Collegiate Athletic Conference (MASCAC) win over host Bridgewater State University on Saturday afternoon at the Tinsley Center.
Westfield improves to 8-5 on the season and 2-0 in the MASCAC, while Bridgewater slips to 6-7 overall and 1-1 in conference play.
Felix connected on 11 of 23 field goals attempts and five of her 20 boards came off the offensive glass. She also added two blocked shots and a steal.
Sophomore guard Vanessa Conceicao (New Bedford, Mass.) came off the bench to lead the Bears with 14 points and three boards in 19 minutes, while fellow reserve Jennie Lindland (Edgartown, Mass.) added 11 points, five rebounds, two blocks and three steals in 20 minutes. The Bears’ bench outscored the Owls’ reserves by a margin of 29-6, however the BSU starters combined to score just 24 points.
Junior guard Jen Ashton (Beverly, Mass.) added 13 points, five assists and five steals for Westfield, while sophomore guard Keri Doldoorian (Whitinsville, Mass.) chipped in with ten points and six rebounds. The Owls forced 21 turnovers and held the Bears to just 18 made field goals (18-for-59).
Bridgewater held a 23-19 advantage at the break as both teams shot just 24% from the floor. Trailing 17-16, the Bears held the Owls to just two point over the final 6 ½ minutes of the opening stanza. A Conceicao three-pointer followed by back-to-back baskets from Lindland gave BSU the four-point lead at the intermission. Lindland notched eight of her 11 points in the first half.
A Tatyana Belizaire (Cambridge, Mass.) layup to open the second half gave the Bears their biggest lead of the game at 25-19. The Owls would respond with an 8-0 run capped off by an Alyssa Darling (Palmer, Mass.) three-pointer to jump ahead 27-25. A Conceicao driving layup and a Lindland free throw put the Bears back on top, 28-27, with 15 minutes remaining. That would be the last time Bridgewater would lead in the game.
The Owls would hold the Bears scoreless over the next five minutes and scored the next seven points on a pair of layups by Felix a jumper by Ashton and a Tayler Travis (Somerset, Mass.) free throw to take control of the game.
Bridgewater pulled to within three points on two occasions over the final eight minutes, but Felix answered both times with easy layups and the Bears missed six free throws during that span.
Neither team shot the ball particularly well throughout the contest. The Owls shot 31% (22-71) from the floor, 18% (2-11) from three point range and 56% (15-27) at the free throw line. The Bears finished with shooting figures of 31% (18-59) from the field, 20% (4-20) from behind the arc and 65% (13-20) at the charity stripe. Westfield held a 51- 47 rebounding advantage including a 19-11 edge on the offensive boards.
Both teams are on the road on Tuesday evening. The Bears travel to MASCAC rival Framingham State University to take on the Rams at six, while the Owls (6:00) head to non-conference foe Castleton State College for a six o’clock game with the Spartans.