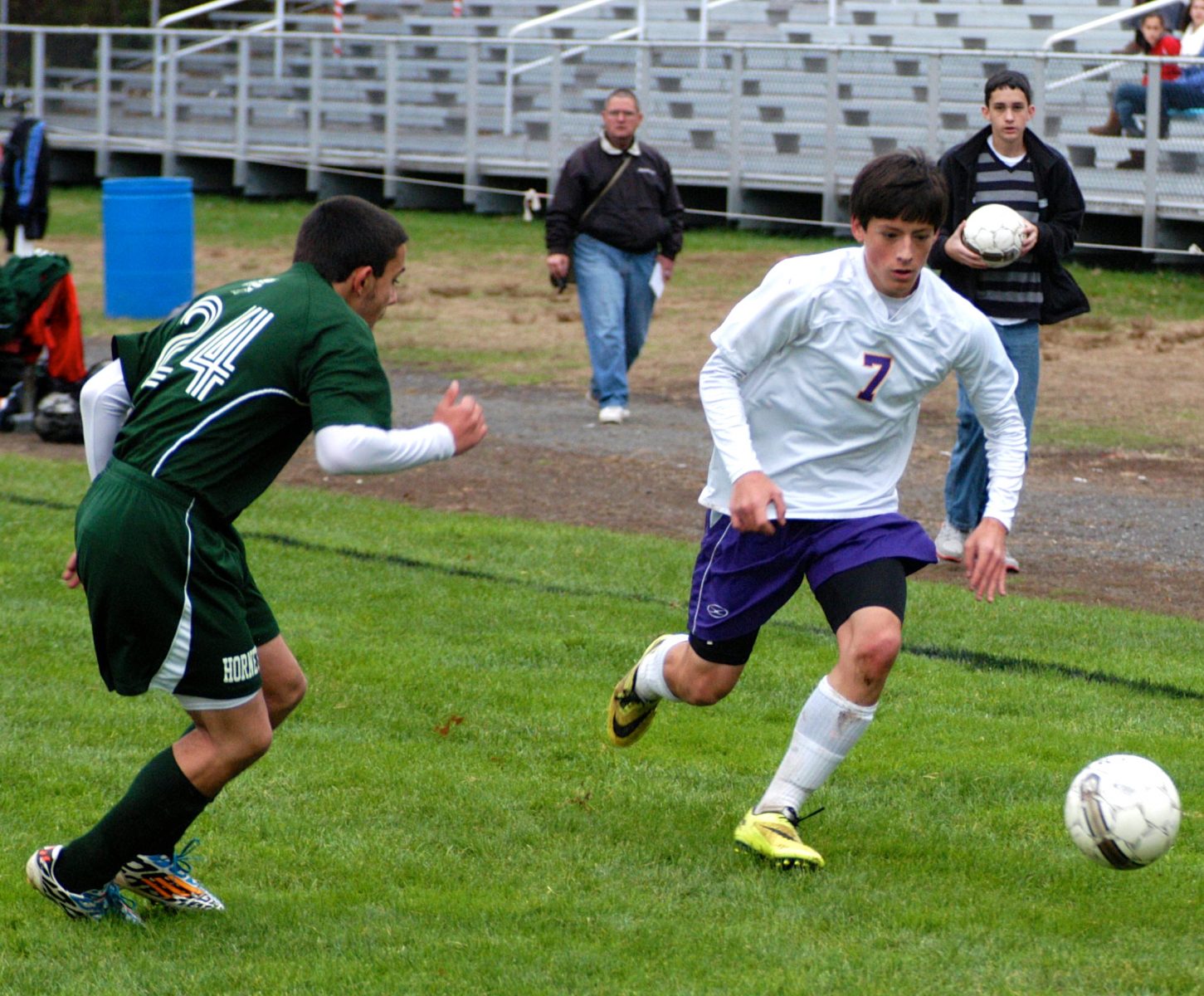 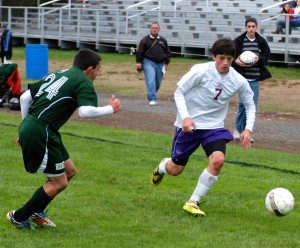 WESTFIELD – ‘Tis the playoff season.
The Westfield Vocational-Technical and McCann Tech high school boys’ soccer teams played more than 100 scoreless minutes before a champion was crowned in Friday’s state small vocational schools’ final at Bullens Field. The Hornets prevailed in a shootout 1-0.
McCann Tech won on penalty kicks, 7-6. It was the first loss of the season for Westfield Voc-Tech (17-1-1).
“It was just heartbreaking to lose your first game of the year in 14 penalty kicks with the championship on the line,” said Voc-Tech coach Kyle Dulude, whose team was seeking a repeat.
“Maybe we were a little conservative at times, and injuries to two starters didn’t help,” Dulude said, “but you have to give credit to the McCann team for making all of their penalty kicks as well as battling all game long.”
It was a stalemate that easily could have went either way in regulation.
McCann Tech got off a few good shots early, and Voc-Tech nearly claimed victory several times in the second half.
Early in the second half, Alex Stepanchuk hit a shot off the right post on a re-direction. Less than 10 minutes later, Alex Makarchuk attempted to squeeze a shot through an opening in the defense at the top of the penalty box, but McCann goalie Chris Gajda saved it.
Dmitriy Stepanchuk attempted a few shots in the final 25 minutes of regulation, including a pair of headers, and Roman Tikhoncuk made a late run. The Hornets held again.
“From a spectator’s point of view, it was exciting,” Dulude said.
While McCann Tech claimed the crown, an even bigger piece of hardware is up for grabs when the Western Massachusetts playoffs get under way early next week.
The two teams will meet again.
Voc-Tech, fresh off an unbeaten regular season, drew the fifth seed in the opening round of the Division 4 sectionals. The Tigers will face 12th seeded McCann (13-5-2) Tues., Nov. 4 at Bullens Field at 4 p.m.
“I’m a little disappointed with our seeding for western Mass, knowing the team we have to face just beat us,” Dulude said. “I see no advantage where we placed as a five seed. Nonetheless, we at least have one more game to play. Hopefully we will be able to bounce back … In regards to playing McCann, both teams know each other. I think it will simply come down to who wants it more.”
TOURNAMENT NOTES: In other D4 boys’ soccer action, No. 7 Gateway (8-5-3) hosts No. 10 Granby (7-6-5) and No. 9 St. Mary’s (13-4-1) travels to No. 8 Lee (9-6-2). The Saints play Tuesday at 2 p.m. … In Division III, No. 4 Southwick-Tolland-Granville Regional (9-3-4) earned a bye, and will host No. 5 Monument Mountain (9-5-4) … Fifth-seeded Westfield (7-6-5) will play at No. 4 Pittsfield (9-4-5) in Division I Tuesday at 2 … On the girls’ side, No. 9 Southwick (7-6-5) will play at No. 8 South Hadley (9-3-6) in D3; No. 2 Gateway (12-3-1) drew a bye … In field hockey, top-seeded Southwick (13-1-2) will play the winner of No. 2 Frontier/No. 3 Greenfield Thursday at Clark Field in West Springfield. Time TBA. 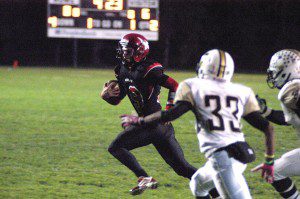 FOOTBALL
Golden Eagles soar
Central 33, Westfield 0
Central scored on a QB keeper late in the first quarter, a 75-yard screen pass in the waning seconds of the first half, and tacked on 20 more points in the second half of a shutout at Bullens Field.
Westfield came within inches of a tie – or taking the lead – early in the second quarter when sophomore quarterback Austin St. Pierre was stopped just inches short of the goal line on a run.
The Bombers converted several fourth down plays on the drive, including a fake punt on fourth-and-2 deep in their own territory, a QB keeper to move the chains, and a Cody Neidig plunge to extend the drive. Pierre was tackled at the goal line on a run, extending his arms and the nose of the ball to the 1-yard line before a turnover on downs.