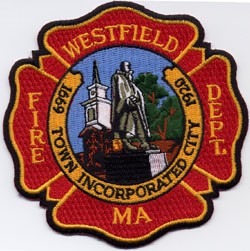 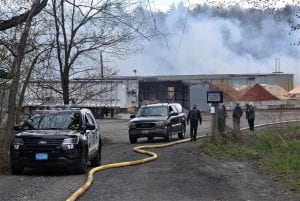 WESTFIELD – The building housing the pallet shop at Green Meadow Lumber was destroyed when a fire of undetermined origin swept through it ahead of strong winds Saturday.
A 2:38 p.m. report of a shed fire on the grounds of the lumber mill sent firefighters to upper Western Avenue where they found a building fully involved in flames.
Deputy Chief Ben Warren, the department’s fire prevention officer, reports that the “shed” reported to be burning was found to be the pallet shop and the arriving firefighters heard several explosions inside. Warren said that explosions were caused by propane tanks which had been used to power forklifts in the pallet factory.
He also said that the fire was 2,300 feet from the nearest fire hydrant and three pumping stations were required to get water to the fire. He explained that three pumper trucks were used to boost the water pressure between the hydrant and the fire. “They did a great job with it” he said adding that firefighters had 1,000 gallons of water per minute available to fight the fire which was pushed by heavy winds. 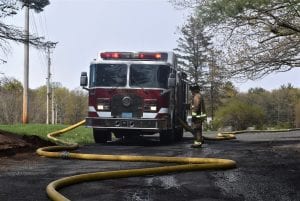 A Westfield firefighter stands by an engine and monitors the hose system delivering water to a fire on Western Avenue May 9, 2020. (HOPE E. TREMBLAY.THE WESTFIELD NEWS)

“Because there was so much wind it fanned the fire right through the building” he said. Despite the wind, firefighters were able to keep the fire away from the other buildings at the lumber company and bring it under control promptly. However, it took five hours to completely extinguish the fire.
Warren stressed that, since the building housed a pallet shop there was an abundance of fuel for the fire which was so hot it deformed the steel supporting the building. “It got so hot it (the steel) just started getting soft and moving” he said. Although the building is still standing, he said it was a total loss.
“Every piece of equipment Westfield has was up at the scene” he said and reported that the department got help for nearby communities to ensure the safety of the rest of the city. An Agawam engine and the Holyoke ladder truck responded to the Broad Street fire station to be available in case of another fire elsewhere in the city.
Warren said that the cause of the fire has not been determined but he said he is confident that the fire was “not suspicious.” He said that State Trooper Michael Mazza of the Massachusetts Fire Marshal’s office is assisting with the investigation as is city detective Tony Tsatsos.