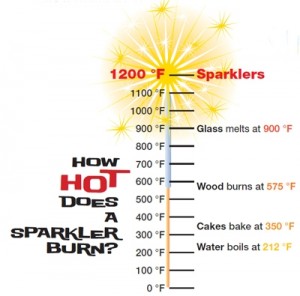 Not even sparklers are safe and all fireworks should be left to the professionals, the state’s Fire Marshall urges. (Graphic courtesy the National Fire Protection Association)

WESTFIELD – Everyone with a calendar knows that the Fourth of July will be here soon and many may be tempted to stage an amateur fireworks display to celebrate the holiday but the Commonwealth’s fire marshal urges the public to remember why such displays are illegal and to “leave fireworks to the professionals.”
“I can understand the attraction and excitement of fireworks” Fire Marshal Stephen D. Coan writes but he goes on to point out that “our strong law and public education efforts are effective at keeping the fires and injuries lower than where they are allowed.”
Coan compares the Bay State with Washington, a state with a similar number of residents and a law which allows some personal use of fireworks, and reports “They have almost twice as many fires from fireworks, and have 45 injuries from fireworks for every one we experience her in the Commonwealth.”
Coan says that the majority of fireworks victims, both nationally and in Massachusetts, are children younger than 15 and says that all the fireworks that caused their injuries were purchased by adults.
He said those adults should instead set a good example for children because “Children will imitate adults and think they can use them safely.” But, he said, “there are no do-overs when it comes to children’s eyes, hands and skin.”
Coan said that fireworks manufacturers sometimes label their products “safe and sane” but says “in fact they are neither.”
“Even sparklers burn at over 1,200 degrees F. No on would hand a lit match to a child, which burns at about 500 degrees F.”
He noted that fireworks can be unpredictable and said that their illegal use in the Commonwealth “caused several terrible incidents despite our best efforts to educate the public.”
Among the examples of last year’s “terrible incidents” which Coan cited was one in Chicopee which required the State Police bomb squad to dispose of commercial-grade fireworks after a fireworks explosion severely injured a resident’s hand and also injured his young son.
Coan says that both local and state fire officials work with fireworks professionals, who are licensed by his office, to ensure that modern regulations are enforced to make the shows safe both of the spectators and the shooters.
As a result, he said, “fireworks mishaps and injuries at professional shows are rare in our sate.”
“At illegal shows, there is no licensed, trained shooter,” he said. “No one is setting safe distances for the audience, no fire engine or EMT is standing by, and sadly alcohol is often involved and judgment impaired.”
In Westfield, the Independence Day fireworks display will be sponsored by The Rotary Club of Westfield and hosted by Stanley Park on Saturday, July 5, at dusk.