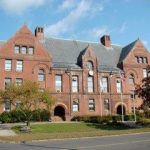 WESTFIELD – The Westfield City Council Feb. 18 unanimously approved the first reading of a motion to bond for water main repairs on Western Avenue.

The repairs are proposed for Phase 2 of the Western Avenue construction project. Finance chair Ralph J. Figy submitted a motion at the Feb. 18 City Council meeting to authorize a $700,000 bond for the work. Figy asked for an immediate vote on the first reading for the bond.

At-large Councilor Richard K. Sullivan Jr. said he had suggested financing the water main work through a bond rather than from Free Cash, which was the original request. He said the Finance Committee thought the project to replace and upgrade the water system at the same time as construction of the roadway was justified, but opposed taking it from Free Cash for a department with an enterprise fund.

“This appropriation really needs to be a bond, that is why it’s before us for immediate action. The mayor needs to tell the state that this money is available by the end of March,” Sullivan said.

During the discussion, At-large Councilor Dave Flaherty said he agreed “100 percent” with Sullivan, and said he had made the suggestion for immediate consideration. “It won’t restrict our ability to get information on this, it’s just to get the ball rolling,” he said. The first reading for the bond passed unanimously.

The Council did pass an appropriation of $628,428 from Free Cash to purchase two properties on Franklin Street for the Franklin Avenue Elementary School building project. Sullivan said the added frontage will allow space for an exit and entrance on Franklin Street, greater flexibility in designing the school, and will allow the students to stay in school during construction.

During the discussion, At-large Councilor James R. Adams asked if the “knock-down” of the houses were included in the price. Mayor Donald F. Humason Jr., who served as the chair of the building committee and who was on the call, said the cost of taking down the houses was not included.

Ward 3 Councilor Bridget Matthews-Kane, who also serves on the committee, said cost had been a discussion throughout the whole process. She said the city would see substantial savings by not relocating students during the construction of the school, adding that when Juniper Park was closing, the estimated cost for trailers was $2 to $3 million.

Flaherty agreed, and said the trailer issue was one of the reasons they went to Russell Elementary. “The path you want to take is probably the best one. Hopefully the school will last more than 50 years,” he said.

Six other items were approved by the City Council on Finance committee recommendations, including $62,405 for the Boys & Girls Club playground from Community Preservation undesignated funds. Figy said the playground is on city-owned land, and will be open to the public during non-Club hours.

Also approved was $50,000 from Free Cash to complete work on the parking lot at the Cross Street playground. Figy said the parking lot would be on school property, and had been approved by the School Committee.

An appropriation of $350,000 from Free Cash to Stabilization represented “promises made, promises kept,” according to Sullivan. He said the money had been spent on an airport project on the condition that it would go back into stabilization when the project was done.

Another $73,000 from Free Cash was approved to pay for recycling costs. Figy said this is a new expense for the city, as recycling formerly had generated funds. He said at budget time, the city had estimated the cost for the year which is currently running $26,000 per month. He said this appropriation should fully fund the rest of the year.

Also passed was a transfer of $306,000 from the Water Department undesignated funds to replenish accounts. Matthews-Kane said no general funds were being used.

Also passed was $8,500 from Stormwater undesignated funds to pay to run a camera through the pipes at the Williams Riding Way pump station, to view any blockages.

At-large Councilor Cindy C. Harris thanked the Finance committee for their explanations on the very long list discussed at the meeting.