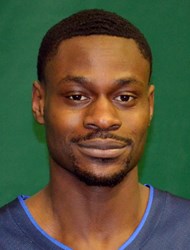 WESTFIELD – Fitchburg State got 17 points from Jaleel Bell and parlayed an early run in the second half into an 84-67 win over Westfield State in a MASCAC men’s basketball game at the Woodward Center on Saturday afternoon.
Fitchburg led 39-34 at the intermission after a see-saw first half.
The Falcons came out of the gate fast with a 9-0 spurt to start the second half capped by a layup from Bell. After Westfield broke the spurt with a free throw from Shane Pasquantonio, the Falcons further extended their lead by adding another seven unanswered points to build a 19-point lead, 54-35 with 15:10 to play in the game.

Fitchburg maintained a comfortable lead from that point forward. Lenny Burgos added 16 points and Givaughn Jones 14. The Falcons improve to 12-8, 5-2 in the MASCAC. The Falcons shot 52.5 percent from the floor and 46.2 percent (6-13) from three point range.
Westfield was led by 16 points from Tchuijo Nkamebo. Pasquantonio added 12 points and seven rebounds, and Brian Foley scored 10 with six rebounds for the Owls (8-11, 3-4 MASCAC).
The two teams traded leads early in the game. Westfield grabbed a 27-22 lead on a Jose Allen three pointer with 5:37 left in the first half.
The Falcons answered with a 7-0 run, fueled by a three pointer and layup from Bell to retake the lead 29-27 on a Jalen Williams layup with 4:26 to play in the half.
Westfield will be back in action on Wednesday, traveling to North Adams to face MCLA. Fitchburg will return to the court on next Saturday at Bridgewater State.