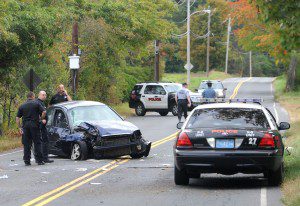 City police officers Christopher Coach, Sgt. Robert Saunders and Michael Gamache examine a 2003 Honda Civic which crashed into a utility pole on Shaker Road while the operator was fleeing police Thursday morning. The operator expired after he was transported to Baystate Medical Center by Westfield Fire Department ambulance. (Photo by Carl E. Hartdegen)

WESTFIELD – A Chicopee man expired at Baystate Medical Center Thursday morning as a result of injuries sustained when his 2003 Honda Civic struck a utility pole on Shaker Road while he was in flight from police.
Glenn Madison, of 1 Springfield St., Chicopee, came to the attention of a state trooper, according to a city emergency dispatcher’s report to Westfield police, when the man’s vehicle struck a state police cruiser.
State Police report that a pursuit began which was abandoned at 6:59 a.m. near the intersection of Mill and South Maple streets and local police were advised to be on the lookout for the suspect car.
A short time later, at 7:29 a.m., Southwick police reported that the car had been stopped in their town but, although a Taser was twice deployed in an effort to detain the operator, the vehicle again fled, driving toward Sunnyside Road.
Later in the morning a resident reported finding a vehicular bumper on the side of Hillside Road with a registration plate attached and an officer investigating the crash said that the bumper was related to the crashed car.
City officers were dispatched to the area and within minutes Westfield Officer Chris Coach reported that he was leading the pursuit of the vehicle which was then operating southbound on Southwick Road.
Coach followed the vehicle and reports it turned on to Ponders Hollow Road.
Minutes later, Coach reported that the car had struck a utility pole on Shaker Road at a speed estimated to be 60 mph.
Madison was ejected from the vehicle but survived to be transported by ambulance to Baystate Medical Center where there is a trauma center.
Westfield Police Capt. Michael McCabe, who went to the crash site, said “He definitely left the scene alive” but said later that there have been reports both that he expired and that he was revived by CPR.
However, Hampden County District Attorney Mark G. Mastroianni, who also went to the accident scene, later said that his assistant district attorney assigned to investigate the crash informed him that Madison had died due to his injuries.
Shaker Road was closed due to the crash and the school department was notified that school buses would have to be rerouted.
McCabe said that, although city police would assist State Police investigators, they would be the lead investigators of the crash and a team from the State Police Collision Analysis and Reconstruction Section was dispatched.
Both state and city police cleared the crash site by 12:58 p.m. but the section of Shaker Road remained closed until 1:53 to allow a crew to replace the broken utility pole.