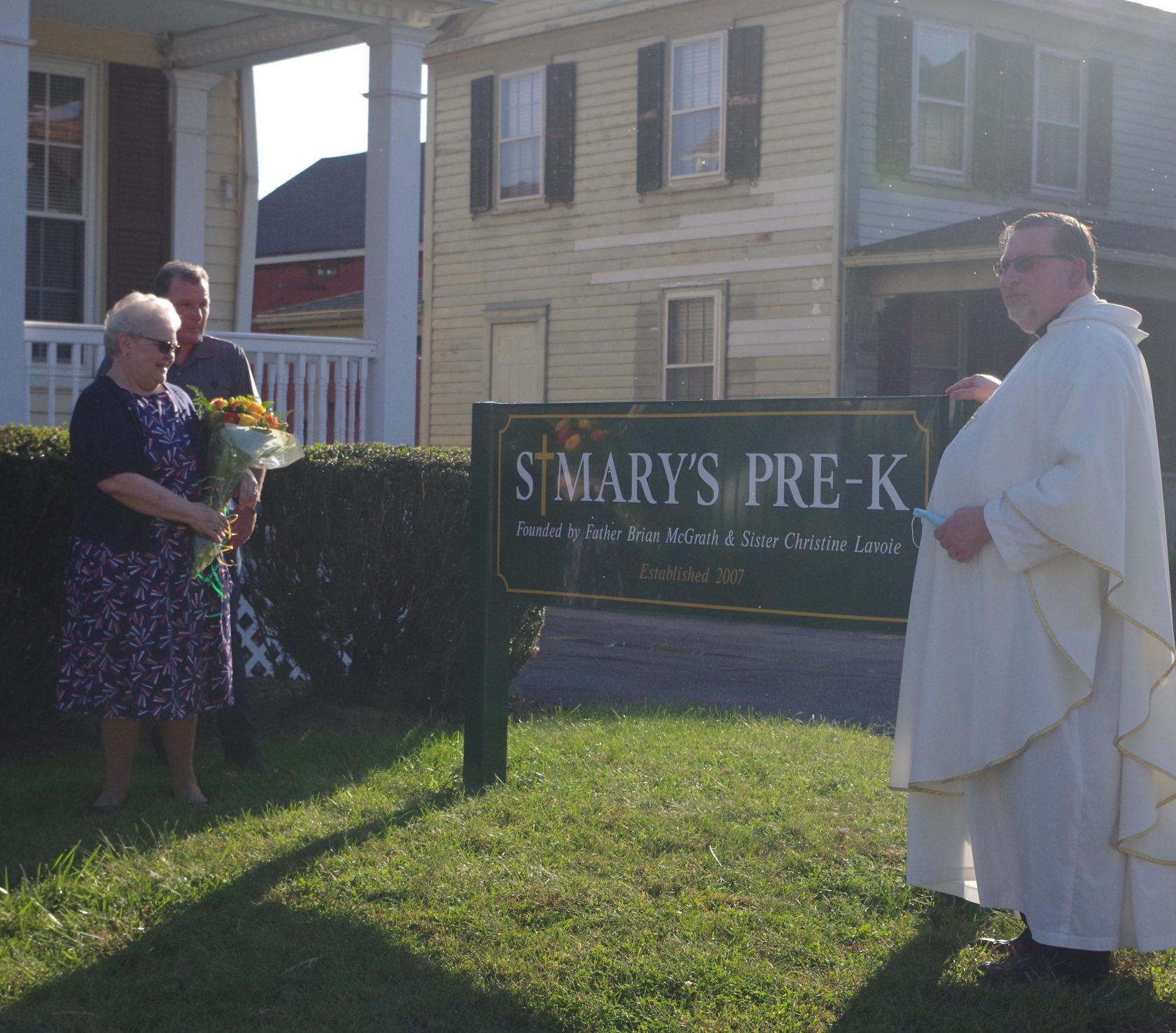 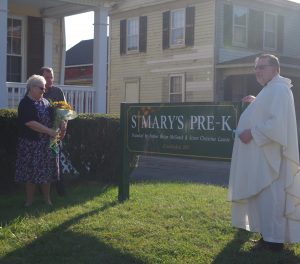 WESTFIELD — St. Mary’s honored two leaders who built the present-day success of the parish and its schools at Founders’ Day on Saturday afternoon.

The second annual celebration started with a vigil Mass in the Bartlett Street church, and continued with an outdoor reception honoring the Rev. Tony Creane and Sister Christine Lavoie.

The Rev. Tony Creane, who was St. Mary’s pastor from 1978 to 1999, is retired in Florida and was not able to make it to Westfield for the event, according to the Rev. John Salatino, the parish’s current pastor. Creane turns 92 this week and stays active playing golf, Salatino said.

Salatino shared his memories of working with Creane as his pastor when he was a young priest assigned to St. Mary’s. He said Creane came to St. Mary’s at a time when its finances were in rough shape and its many buildings — the church, the rectory, the high school, the elementary school — were suffering from neglect. During his two decades as pastor, he put the parish on sound financial footing and renovated all of the buildings, some of them more than once. Salatino said Creane had a talent for connecting with parishioners and business leaders who could help sustain the parish, and for delegating tasks to his priests and staff to serve the parish’s needs. 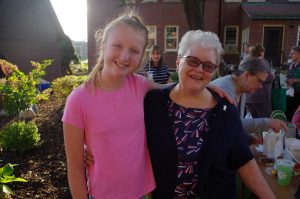 “He just loved the parish,” Salatino recalled. “He loved being our pastor. I’m grateful [to him] for putting us in such great shape.”

During the Founders’ Day Mass, Lavoie said she was accepting the honor on behalf of all of the Sisters of St. Joseph, who worked at the school for the first 118 of its 123-year history. Lavoie was the last sister to be an employee of St. Mary’s Parish School.

Among her lasting contributions to the school were starting an after-school program and expanding to include preschool sessions. The preschool began with one class of four-year-olds, expanding to two classes three years later, and adding a younger class of three-year-olds after that. The parish acquired buildings adjacent to the high school on Bartlett Street to house the pre-kindergarten and younger preschool. 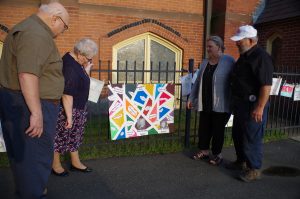 Sister Christine Lavoie, second from left, looks at student artwork with her siblings at Founders’ Day on Sept. 18. Pictured with her are her bother Robert Lavoie, left, and her sister Charlene Potter and brother Eugene Lavoie, right.

She was also particularly proud of achieving accreditation with the New England Association of Schools and Colleges in 2004. In addition to gaining recognition for St. Mary’s, Lavoie also served on NEASC accreditation committees evaluating 12 other schools.

Lavoie never fully retired. She works as a part-time elementary reading teacher at St. Mary Academy in Longmeadow, and also teaches classes on the church’s liturgical calendar. She has been a teacher since 1974, and celebrated her 50th jubilee as a nun two years ago. 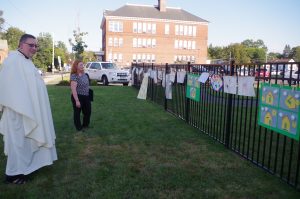 Last year, when St. Mary’s Parish School Principal Juli Jensen-Derrig was hospitalized, Lavoie came back to serve as interim principal for four months. Sister Paula Robillard, who lives in the same community as Lavoie, said although Lavoie was happy with her work in Longmeadow, she stepped up to help her former school when it needed her, commuting daily from East Longmeadow. 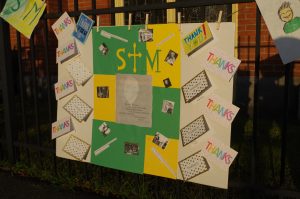 John Bonini, a St. Mary’s parishioner and general counsel at Westfield Bank, the event’s presenting sponsor, recalled Lavoie as a constant and friendly presence at the school that both of his sons attended. She always made an extra effort to get to know each family, he said. She would greet each child at the school door, every day, no matter how bad the weather was. That sort of personal attention makes a big difference, Bonini said.

“Just to have her here was a comforting sight for the kids,” he said. “She was the school, basically.” 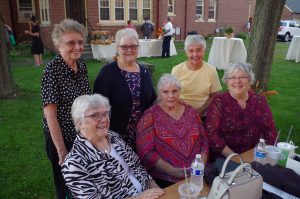 Lavoie’s brothers and sisters attended the reception. Her brother Robert said his sister had always been a dedicated student, and knew she was going to be a nun at an early age. The Lavoies grew up in Ludlow, attending what was then St. John the Baptist Church and the former Cathedral High School in Springfield.

Kathleen Angco-Vieweg, the parish’s pastoral minister, said it made sense to honor Creane and Lavoie together, as Lavoie was instrumental in preserving and expanding school programs, and Creane’s leadership provided the financial footing to keep the school running. 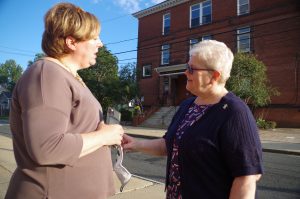 “He’s touched every building” on the St. Mary’s campus, Angco-Vieweg said. “He really raised money for everything we do here.”

Creane was also the pastor who hired Lavoie, though for most of her term as principal she served with the Rev. Brian McGrath as pastor. McGrath was the sole honoree at the first Founders’ Day, last year. 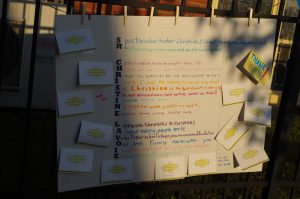 In addition to honoring Creane and Lavoie on Founders’ Day, two donation funds have been named for the former pastor and former principal. The Growing Tree Endowment, which Creane founded, is now called the Growing Tree Endowment in Honor of Father Tony Creane. St. Mary’s Parish School this year started a scholarship fund called the Sister Christine Lavoie Scholarship. Both funds are accepting donations. 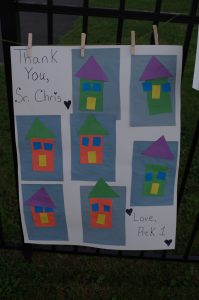 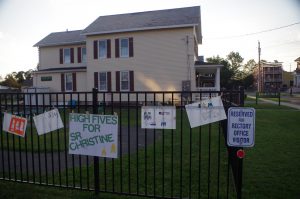