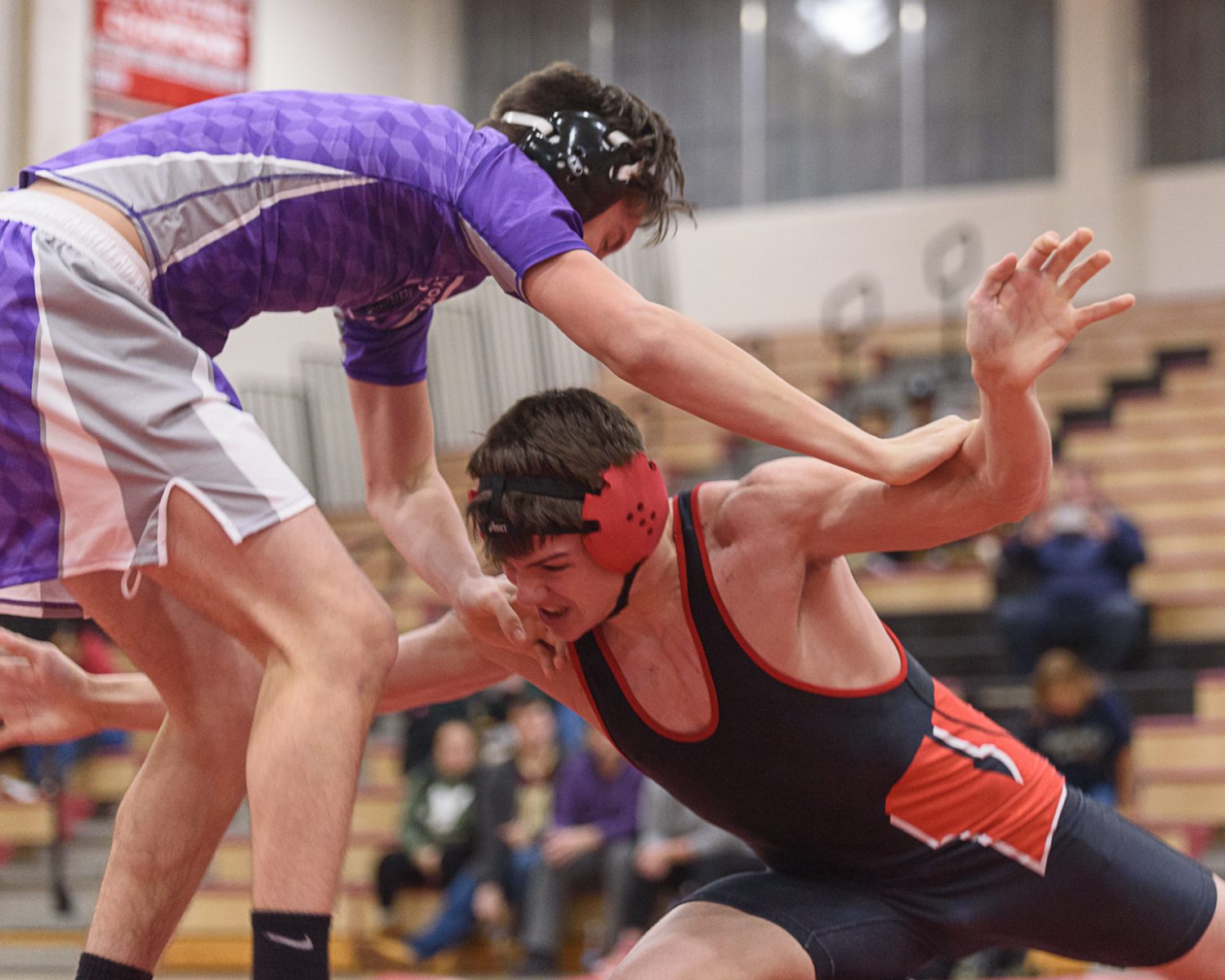 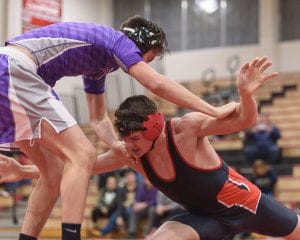 Westfield’s Cam Foster goes for the legs of Holyoke’s Will Alicia en route to a win in a matchup of 160-pounders Thursday night. (Photo by Marc St. Onge)

WESTFIELD – A high school wrestling team bolstered by several promising freshmen have kept their heads held high this season for one very good reason – looking up to one very talented senior wrestler.
Westfield senior Cam Foster kept up his impressive start to the season, dispatching Holyoke’s Will Alicia in 1:24 during a Thursday night match against Holyoke in the Whip City. Foster has already finished as a runner-up in the Frank Chavez tournament and third in the Berkshire Holiday tournament.
“Foster is the clear leader of a team this loaded with freshmen,” Westfield wrestling head coach Chris Malinowski said. “He is the ideal leader of this team as he is both a verbal leader and one that leads by his actions and performance.”
The team’s only other senior, Nate Dinnie won by pin at 138 pounds over Holyoke’s Xavier Hernandez in 53 seconds. The Purple Knights won the dual meet 60-21.
“Five forfeits gave up were too much to overcome,” said coach Malinowski, whose team is in the midst of a “rebuilding year.”
At 170, Westfield freshman Ethan Towers overcame some early mistakes to defeat Anthony Cruz by pin in 3:233. At 220, in his first action of the year, sophomore Jackson Krause won a thriller over Holyoke’s Aiden Stark, 11-10.
Freshmen Tristan Connors (113 pounds), Anthony Ross (120), and Jeffery Robinson (195) also wrestled well for the Bombers.
“We are just trying to get better every time out,” Malinowski said. “If we just keep learning and improving, we will be a different team by the end of the year.”
Westfield next welcomes the Ludlow Lions to the Whip City for a home match Wednesday at 7 p.m.

Red Raiders stave off Rams
Hampshire 53, Southwick 37
Four players scored in double digits to lead Hampshire. Evan Clarke led Southwick (1-3) with 13 points. Rams’ Josh Lis had nine, and Ryan Molta, 8.
Southwick trailed by just seven points after three quarters, but scored only three points in the fourth.
“You can pretty much call it a night when you can only score three in a quarter,” Southwick boys basketball head coach Peter Fiorentino said. “We struggled to put the ball in the basket late. …The tale of the night is that we could not score the basketball.”
Southwick’s defense put the clamps on Hampshire’s Justin Forest for much of the game, holding the team’s leading scorer 11 points below his season average.

Fri., Jan. 3
GIRLS BASKETBALL
Bombers suffer first defeat
Holyoke 54, Westfield 48
Yamaya Perez (18 points), Bianca Ortiz (13), and Ashley Vazquez (12) produced double-digit scoring outputs; and Holyoke made 11 3-pointers – two more than Westfield (5-1) had allowed all season – to knock the Bombers from the ranks of the unbeaten.
“They got hot and didn’t look back,” Westfield girls basketball head coach Dylan Willey said. “We couldn’t slow them down. They were getting to the line, finishing free throws and finishing tough.”
Chandler Pedolzky and Olivia Hadla led Westfield with 19 and 18 points, respectively.
“They shouldered a lot of the weight on the offensive end,” coach Willey said of his top two scorers from Friday night. “It was nice that they scored, but Holyoke outrebounded us. We didn’t get many opportunities at the line and at second chance points. That’s where they won.”
Kaela Mochak was absent from the Westfield lineup Friday night.