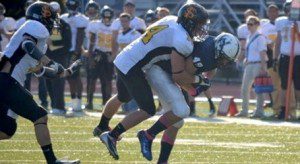 Tight end Jake Storey hauls in one of his two catches. (Photo by Nancy Bals)

WESTFIELD – Junior running back Melikke Van Alystyne ((Salem, MA) rushed for a school record 294 yards on 36 carries to rally Framingham State University to a 30-16 victory over Westfield State University on Saturday.
Framingham remains unbeaten in the Bogan Division of the New England Football Conference with a 5-0 record. The Rams are 7-1 overall and set a single-season school record with their seventh straight victory.
Van Alystyne only scored one touchdown, a two-yard plunge for the game’s final score, but he rushed for 189 of his yards in the second half to rally the Rams from a 13-6 halftime deficit and set the single-game rushing record.
The former record of 275 rushing yards had been set by Abe Bascon vs. Mass. Maritime in 2001. Van Alystyne has now rushed for 3,916 yards in his three years at Framingham.
Westfield, 2-6 overall and 1-4 in the Bogan Division, was looking to pull off an upset in its Homecoming Game, and the Owls took advantage of Ram turnovers to take a 16-13 lead midway through the third quarter.
But the rugged Ram defense, ranked first in the NEFC, along with Van Alystyne, wore down the Owls to spoil their homecoming. 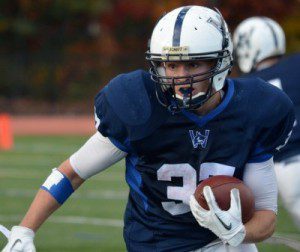 Joshua Trainque scans the field on a pass-run play. (Photo by Nancy Bals)

The game was far from textbook with Westfield losing the ball seven times (four interceptions, three fumbles) and Framingham coughing it up six times (four interceptions, two fumbles) for a total of 13 turnovers. In addition, the teams were flagged for 16 penalties for 144 yards.
Framingham took a 6-0 lead early in the second period on a 50-yard touchdown pass down the middle from Matthew Silva to Tyrone Figueroa. The extra point attempt was blocked by Westfield’s Gregg Jackson.
Westfield tied the score just over two minutes later on an eight-yard touchdown pass from Erik Washburn to Joshua Trainque. The TD was set up when Dan Dowling’s booming 48-yard punt was muffed by the punt returner and recovered by Kane Terilli at the Framingham 4-yard line.
The game remained tied at 6-6 as Kennan Startzell’s PAT kick was just wide right, ending his streak of 59 consecutive point after touchdown conversions.
Westfield scored with 1:39 remaining in the first half to take a 13-6 lead on a 19-yard pass-run play from reserve quarterback Tim Rich to Terilli. The TD was set up when Owl cornerback Mike Szydlowski intercepted a pass at the Framingham 46.
Framingham converted one of Westfield’s seven turnovers into a quick touchdown with 9:20 remaining in the third quarter to tie the score. Ram defensive end Alexander Torti intercepted a Rich pass at the Owl 11 and returned it five yards to the six. On the next play sophomore reserve quarterback Matt Mangano sprinted up the middle untouched for a 6-yard game-tying touchdown.
Westfield took the ensuing kickoff and advanced to the Framingham 16 before the drive stalled. Startzell split the uprights with a 33-yard field goal with 7:01 on the third-quarter clock. The big play in the drive was Rich’s 34-yard pass completion over the middle to tight end Jake Storey.
Framingham then took over defensively and offensively, scoring the game’s final 17 points. The Rams took a 20-16 lead late in the third quarter on a 3-yard touchdown run by Mangano. The drive started at the Owl 47 after Framingham recovered a Westfield fumble. Van Alstyne picked up 49 rushing yards on three carries during the drive.
Framingham’s final score was set up when former Westfield player Brian Castellanos intercepted his second pass of the game and returned it 19 yards to the Westfield 27. Four plays later Van Alstyne scored from two yards out.
The Rams racked up 477 yards in total offense, including 363 net yards rushing on 60 carries. Westfield was held by the top-ranked Framingham defense to 171 total offensive yards.
Silva rushed for 54 yards and completed 9 of 21 passes for 114 yards. Joshua Trainque led the Owls with 44 rushing yards on 15 carries and two pass receptions for 13 yards. Washburn completed 5 of 13 passes for 29 yards before leaving the game with a second-quarter injury. Rich completed 5 of 11 passes for 92 yards.
In addition to two school records being set, Framingham punter Philip Clain tied school record with a 73-yard punt.
Defensively, safety Kevin Donahue led the balanced Framingham attack with seven tackles, including six solos. Westfield safety Gregg Jackson racked up a game-high 16 tackles (10 solos), blocked a PAT, and made a sensational interception near midfield. Linebacker Justin Ehrhardt had 13 tackles, a fumble recovery, and an interception. Linebacker Dan Dowling recorded 11 tackles, including two sacks and four total for losses.