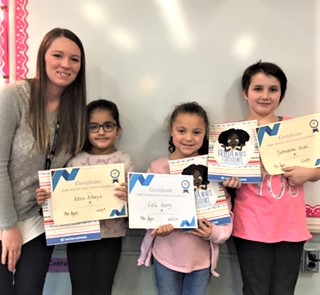 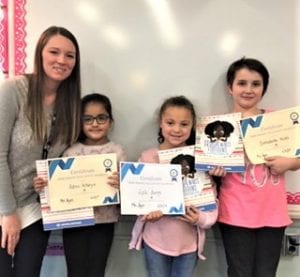 Students at Franklin Avenue  were among 60,000 students across the state who participated in a challenge presented by the Mass STEM Hub and Project Lead the Way to solve real-world problems by reducing food waste during Science, Technology, Math and Engineering (STEM) Week in the schools.

Ayers said any classroom in Massachusetts was invited to participate in the STEM week challenge, which had different lessons and challenges by grade level. Their challenge was for all kindergarten through second grade classrooms.
“Our STEM Challenge team used the design process to become engineers after we gathered information about food waste. First, we asked the question, `How can we design something that preserves an apple?’ and considered all of the things we learned throughout STEM week. We explored the different recycled materials to test them for how well they kept air and water out, if they kept the apple cold, if the material ripped easily, and if the material could cover the entire apple. After our exploration, we designed a model together using all of our ideas,” Ayers said.
She said all of the students in her class formed groups and created their designs out of the recycled materials they had studied. She said they could only send one entry in for consideration, so they decided as a classroom which apple looked the best after several days compared to a test apple, and chose that project for submission.
The winning project was created by students Ashnu, Bernadette, and Lyla, who wrapped the apple with a thick kitchen cloth to keep air out and protect the apple, followed by a layer of parchment paper to keep water out, followed by a layer of bubble wrap to keep it cold. Finally, they placed the apple into a cardboard box with a lot of tape and glue to hold it in place. 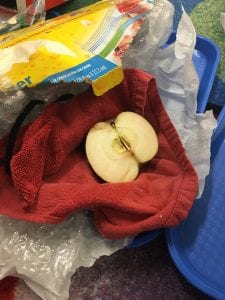 “We think that our apple did better than the test apple because the thick kitchen cloth kept a lot of the air and water out of our apple. We think the extra layers of bubble wrap and parchment paper helped to keep the apple from getting warm and decomposing,” Ayers wrote on the class submission to the challenge, adding, “If we were to redesign our design, we would add a plastic produce bag before the kitchen cloth because that would keep more air out. We think some air leaked through our kitchen cloth because it has holes in it between the stitches of fabric.”
Ayers said they received real world feedback from industry professionals who reviewed their submission, including a biomedical and software engineer.
As part of their prize for winning first place in the online K-2 competition, their class at Franklin Avenue will go on a field trip to TD Garden in Boston to meet with Chef Yousef, Executive Chef, who provided context for the K-2 challenge. Students will get a behind the scenes look at the TD Garden kitchen and food preservation process for the stadium.
The class also received the gift of two books, “Frieda Makes a Difference: Sustainable Development Goals,” and “How You Too Can Change the World” from United Nations Publications.
“I am so blessed to be principal of Franklin Avenue, where students are curious and teachers go above and beyond. Mrs. Ayers and her class are reaping the benefits of their efforts, and we are all so very proud of them,” said Franklin Avenue principal Chris Tolpa.
The STEM Week Challenge was part of Mass STEM Week, a statewide effort to boost the interest, awareness and ability for all learners to envision themselves in STEM education and careers. Project Leads the Way worked with Dell Technologies, MassDEP and TD Garden experts to create content and a project curriculum. Last month, an estimated 1,600 K – 12 teachers from over 400 schools in MA implemented the program in their classrooms allowing students to use STEM knowledge and skills to develop prototypes to tackle zero waste.