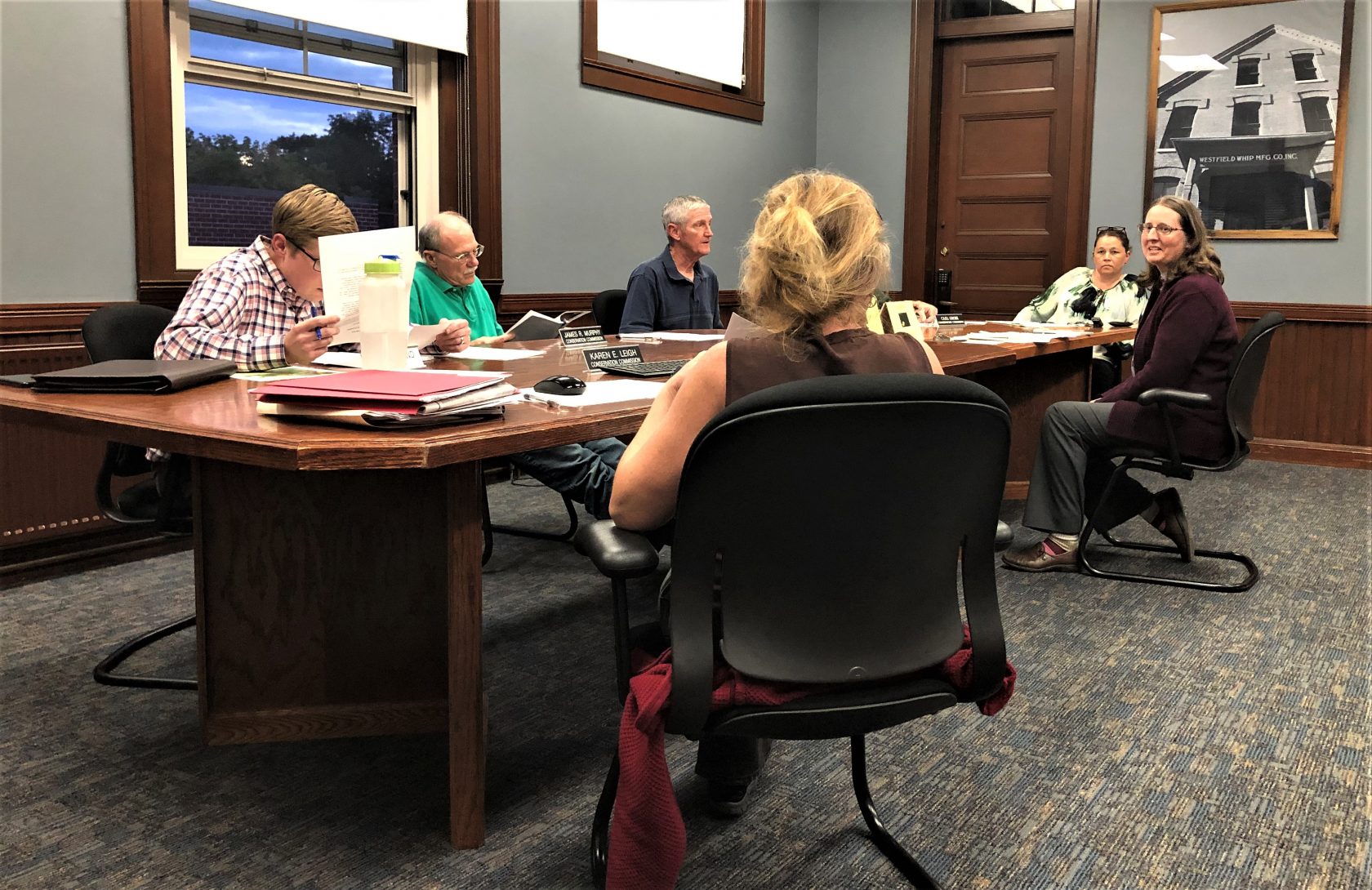 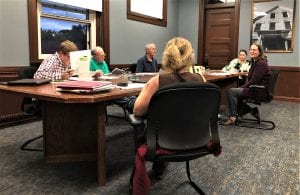 Emily Boss of the Franklin Land Trust (on right) at the Conservation Commission Tuesday. (Photo by Amy Porter)

The property, owned by the Baker family, received an open space grant of $189,900 in 2017 from the Community Preservation Committee.
Boss said she came to see if the city wants to have an interest in the conservation restriction.
“We’re hoping to close by the end of the year,” she said.
Chairman pro temp Thomas E. Sharp, who also serves as the chairman of the CPC, described the project as “unique and exciting,” because the land is contiguous with other conservation lands, creating a large block of open space off Montgomery Road.
Boss said Robert and Karen Baker have leased some acreage for cattle under the agreement. The conservation restriction is in perpetuity.
Sharp asked what the liability would be if the city were to co-hold the restriction. Boss said the town would participate in annual monitoring of the land. Franklin Land Trust would remain the primary holder. She said if any enforcement were required, the land trust would take on any financial burden.
“My understanding is we would work with the city to the extent of enforcement,” Boss said. She said once the memorandum of understanding were approved by the City Council, it would end up in the Conservation Commission’s lap for review and recommendation.
Commission member James R. Murphy, Jr. said they had declined a few similar options, due to a lack of manpower for oversight. “This is spectacular,” he said,
Murphy commented that it is his understanding that conserved land leased for farming doesn’t negate the need to get permits and follow federal, state and local laws.
Boss said all permits apply. She said forest cutting can be allowed up to statutory limits, and hunting. She called it a stepped process. She said the Bakers like the idea of the city being owners of the property.
Sharp said he is also in favor of public access to the land, but remembered that it is not a good idea due to the large bulls on the farm acreage being leased.
Boss said once the land trust determines whether the city will be a holder or not, they will prepare the final restriction and communicate with the commission.
Murphy said he is in favor of the proposal, and would like to see it happen following a review by the city’s Law Department. The matter was continued to Sept. 24.