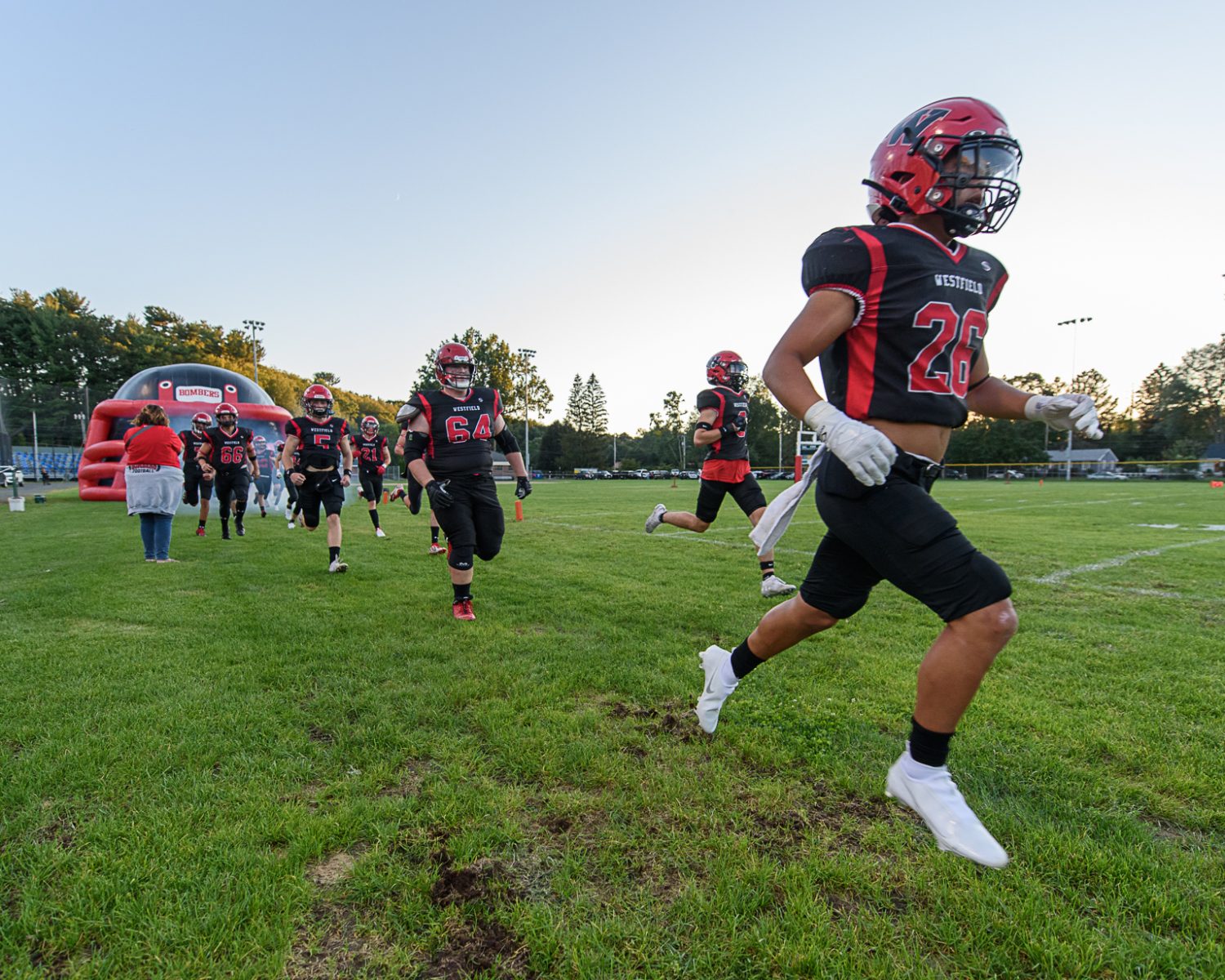 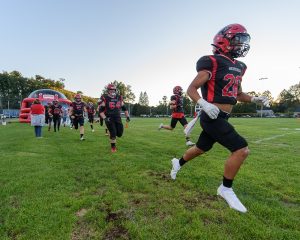 The Westfield High School football team takes the field for the season opener against Amherst. The Bombers upcoming game against Pittsfield has been postponed due to COVID-related issues on the opposing team. (THE WESTFIELD NEWS FILE PHOTO)

WESTFIELD – In another reminder that the pandemic is still prevalent in some of our cities and towns, the Friday night football game between the Westfield and Pittsfield high school football teams has been canceled due to a COVID outbreak among the Pittsfield football team.
The official word regarding Friday night’s contest is that Pittsfield (1-1) could not field a team due to multiple players with COVID, according to team officials. The game which was scheduled to be played at Berkshire Community College, will now be considered a non-contest as teams are excused being handed a forfeit when a game is not played due to any COVID-related issues.
“It’s a letdown because we are going to miss out on a game that we were excited to play,” Westfield High School football coach Rob Parent said. “Pittsfield is a great team. It would have been nice to see how we match up with one of the best teams in Western Mass.”
Despite the disappointment over the loss of the game, coach Parent issued some words of sympathy for those affected by the coronavirus on the opposing team.
“It’s unfortunate,” he said, “but obviously we wish everyone with the virus or those who have had close contact safety and well-being.”
With the game now erased from Westfield football team’s schedule, the Bombers now plan on taking extra time to clean up fundamentals, their approach, and do some advance scouting on their next opponent, the Holyoke Purple Knights.
“We’re just trying to get better today, and tomorrow the same,” coach Parent said.
Westfield will host Holyoke Fri., Oct. 1 at Bullens Field at 7 p.m. The Bombers (2-0) will enter the game having won its first two games by the combined score of 79-0. The Purple Knights (1-1) will first host Northampton Friday.
“Holyoke has a quarterback who is mobile and athletic and some highly explosive skill players,” coach Parent said. “It’s going to be a test for sure. …We have to get our heads back in it, get refocused and have our attention shifted to Holyoke.”