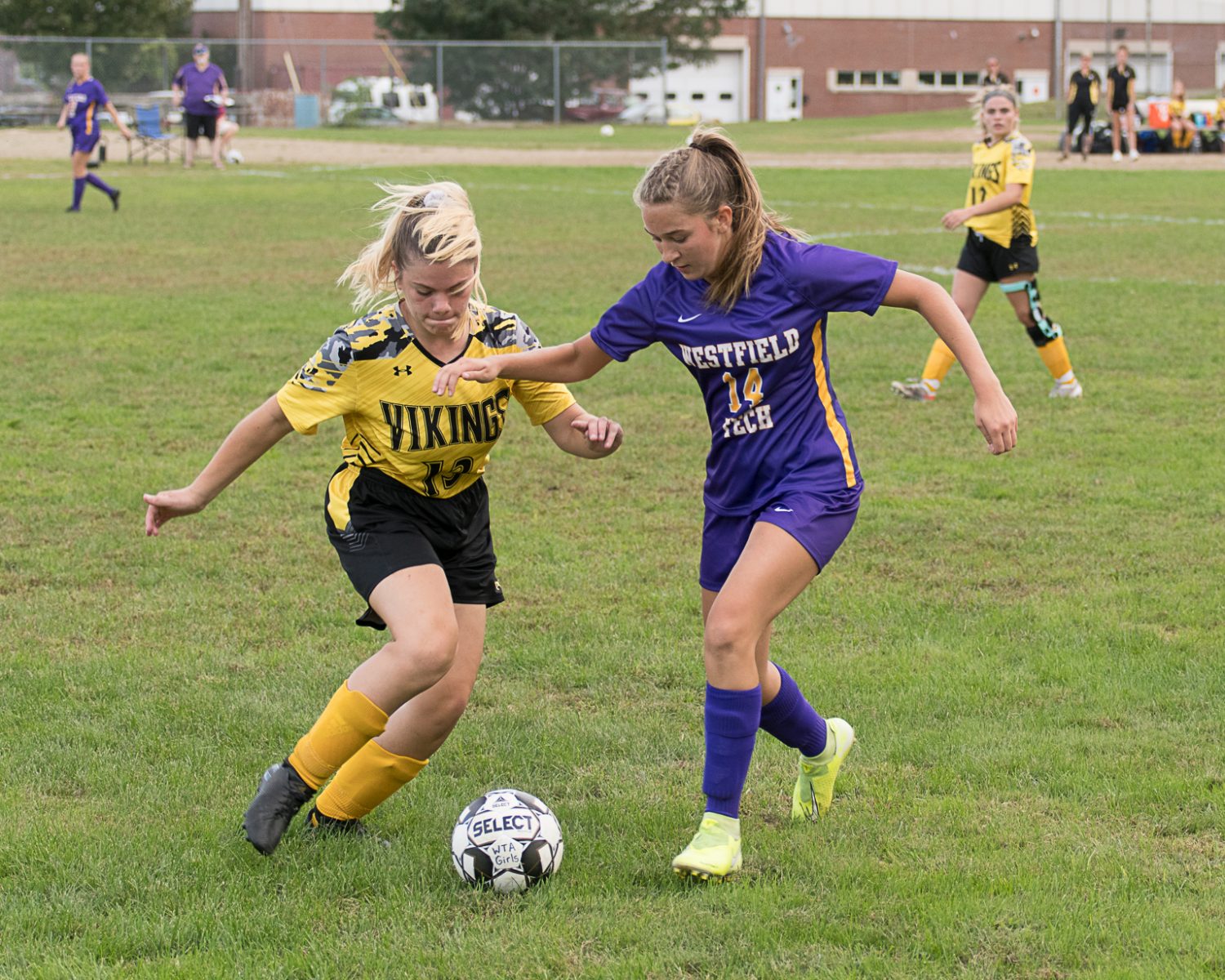 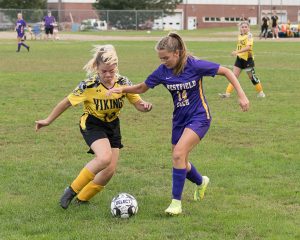 WESTFIELD – The Westfield Technical Academy High School girls soccer team put up a total of 10 goals during a recent two-game win streak but just one goal determined the outcome of their latest effort.
Smith Vocational’s Ayla Mechachonis scored the only goal of Thursday afternoon’s game in the 25th minute and the Vikings’ defense held off a brief offensive surge from Westfield Technical Academy in the waning moments to defeat the Tigers 1-0 at Jachym Field. Anna Glick assisted.
Smith Vocational outshot Westfield Tech, 14-9.
“We had a tough time generating a lot of shots,” Westfield Technical Academy girls soccer coach Lyle Washington said. “Smith won the majority of the 50/50 balls, and that was all over the field, especially on defense. …We had nine shots, but we just couldn’t capitalize off of them.”
Westfield Tech’s offense was slow to get into the flow of the game until the midway point of the opening half. Tigers’ goalie Lindsey Deland kept it close though, making several nice saves in the first half before letting the long kick slip by.
In the second half, Smith Vocational pressured Westfield Tech’s defense deep in their zone. The Tigers defense held strong throughout and Deland made some key stops. She finished with 13 saves.
“It was a stellar performance from her, obviously,” coach Washington said.
As the final minutes ticked away, Westfield Tech made a late push. Tigers’ Iryna Shvyryd, Rileigh Sagan and Allyssa Slack put shots on the goal in the closing minutes but Smith Vocational goalie Maggie Lauder saved every attempt.

GIRLS SOCCER
Goodreau nets six points in Saints’ blowout victory
St. Mary’s 8, Franklin Tech 0
Allie Goodreau exploded for four goals and two assists to lead St. Mary’s in a dominating shutout on the road.
St. Mary’s Emma Goodreau had two goals and an assist to reach 96 career points. Eliana Umana Kimura and Jessica Armstrong scored their first goals of the season for the Saints, and each had an assist. Macy Woodger and Tori smith each made runs from the back and also had assists.
St. Mary’s goalie Amelia Willenborg posted her 11th straight shutout with three saves.
“It was a nice win on the road,” St. Mary’s girls soccer coach Patrick Olearcek said. “It was a great team effort today. So many girls contributed in a variety of ways. We saw the communication, the give and go’s, and much more of what we have been discussing and working on in practice being executed.”

Fox leads Rams past Blue Devils
Southwick 3, Northampton 1
Devan Fox had a hand in all three Southwick goals, scoring twice and assisting on another as the Rams unveiled a new formation to great success.
Fox scored the team’s first goal on a penalty corner set play, getting the feed from Marisa Coviello in her second game after returning from an injury. Fox also scored a goal in the fourth quarter and assisted on a penalty corner goal from Alyssa Jacob.
Southwick goalie Ezri Johnston made one save.