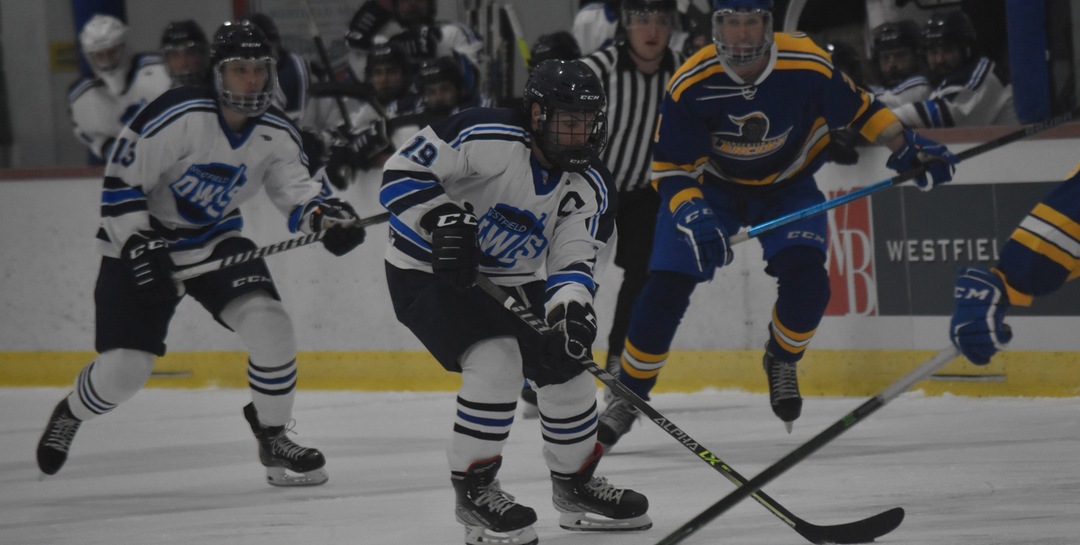 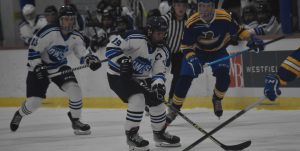 WESTFIELD – Westfield State seniors Paul Frys (Portland, Ore.) and John-Michael DiGregorio (Montreal, Quebec) each tallied pair of goals for the Owls as Westfield topped Johnson and Wales University 5-3 in a non-conference game Tuesday at the New England Sports Village in Attleboro, Mass.
Westfield heads into the Thanksgiving break with a 4-3-1 overall record, while JWU slides to 2-6.
Frys netted the game winner with 5:06 left in regulation to break a 3-3 tie, converting off a centering pass from Dawson Garcia (Oakville, Ontario), with Frys beating Wildcats netminder Jacob Perrin for the goal.
DiGregorio tacked on his second of the night on a 2-on-1 breakaway with 1:11 left, as he cashed in on a pass from Cory Morris (Kahnawake, Quebec) for a 5-3 lead.
Westfield State sophomore goalkeeper Valtteri Valtonen (Helsinki, Finland) came up with a key stop late, gloving a shot with 18 seconds left after an Owls defender lost an edge to create a 2-on-1 situation for Johnson and Wales. Valtonen made 20 saves to ensure the win for Westfield.
Westfield trailed 1-0 after the first period, but DiGregorio’s first marker of the game came on the power play 5:04 into the second period to tie the game 1-1. JWU got a tying goal from Jared Lamothe at 11:52 of the second period.
Goals came fast and furious in the third period, as Westfield’s Jake Ratcliffe (Auckland, New Zealand) tallied just 20 seconds into the period, then Frys scored at the 7:45 mark to give Westfield a 3-2 lead. The Wildcats answered less than two minutes later with a goal from Austin Whytcombe to tie the game at 3-3.
Frys leads the Owls with six goals and nine points this season.
Westfield will jump back into league play after Thanksgiving, hosting Fitchburg State on Thurs., Dec. 2 at 7:35 p.m. at Amelia Park Arena.

Amherst, which received votes in the D3Hoops.com national poll, stayed unbeaten at 5-0 this season, while Westfield State is now 5-2 after a 5-0 start.
The Mammoths held the Owls to just 36.8 percent shooting from the floor, and Westfield finished just 15-29 (51 percent) at the foul line.
Amherst shot 49 percent from the floor, and 12-34 (35%) from three point range, and was a perfect 9-9 at the foul line. The Mammoths also held a 49-32 advantage in rebounds.
Junior guard Jeremy Remigio (Santo Domingo, DR/Providence Central) and sophomore guard Michael Castillo(Northampton, Mass.) each scored 15 points for Westfield. Castillo added seven rebounds in 20 minutes of play off the bench for the Owls.
Grant Robinson scored 14 points and grabbed 11 rebounds for Amherst, which also saw Canin Reynolds win double figures with 12 points.
Westfield returns to action on Monday, Nov. 29 with a 7:00 p.m. game at Elms College. – Courtesy of Westfield State University Sports