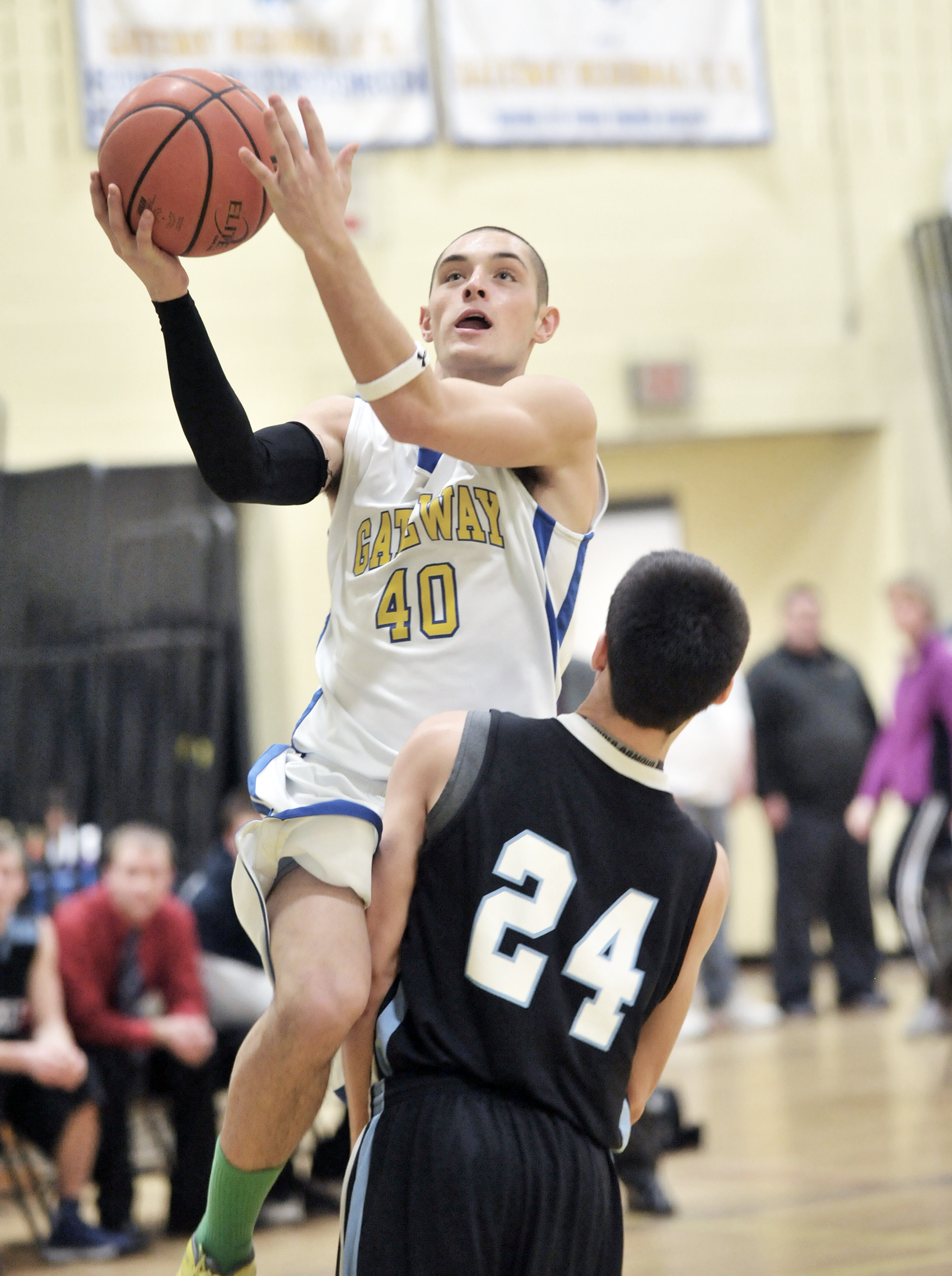 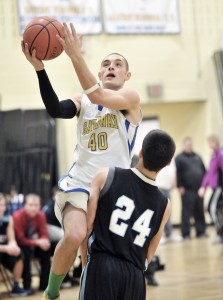 Gateway’s Calvin Dowers, left, leaps for the net as Franklin Tech’s Brian Como attempts to cut off the play Monday night in the Gator Pit. (Photo by Frederick Gore)

HUNTINGTON – Gateway Regional High School senior brothers Calvin and Curtis Dowers have been chasing a basketball league championship for four long years.
On Monday, the Dowers brothers and their fellow teammates at Gateway chased away Franklin Tech 57-44, securing their first Tri-County League title and ending a decade-long drought in front of a packed crowd at the Gator Pit.
“It’s huge to put a banner up there after 11 years,” Curtis Dowers said, pointing to the other championship banners adorning the wall. “And it’s huge to do it against Franklin Tech, the second best team in the league.”
Gateway ran Franklin Tech out of the building from the outset.
The Dowers brothers powered the Gators’ 18-2 run to begin the game. Curtis drilled consecutive 3-pointers in the game’s first two minutes, and converted a steal and lay-up late in the opening quarter. Calvin scored six of the team’s final eight points of the quarter.
Franklin Tech closed out the quarter with three points to pull within 18-5. The Eagles, paced by Chris Wetherby, went on a 6-0 run early in the second quarter to cut Gateway’s lead to single digits, 20-11.
The moment was short-lived for Franklin Tech.
Gateway maintained a double-digit lead throughout, and, in fact, sealed Franklin Tech’s fate midway through the fourth quarter when Calvin Dowers hit consecutive baskets, the second of which was the result of a steal and lay-in.
“It was the fans, senior night, the momentum that carried us,” said Calvin Dowers, who finished with a game-high 20 points. His brother, Curtis, had 14.
Justin Edinger (11 points) and Mike Arel (7) also scored for Gateway. Brett Martin and Brian Como recorded 16 points apiece for Franklin Tech.
“We were fired up for senior night,” Gateway coach Mike O’Connell said. “But that can work two different ways. Either you’re going to throw the ball off the rafters or play solid basketball.”
Fortunately for the Gators, they the shot the lights out – and it wasn’t the glass in the bulbs overhead.
“We’re starting to play the right way at the right time,” O’Connell said.
It’s time for the Division III field to take notice.
Palmer 58, Southwick-Tolland 45
Southwick’s Matt Olson and Palmer’s Kyle Ingram each scored 15 points to lead their respective teams. Ingram converted 9-of-10 from the free throw line.
Both teams were tied 24-24 at the break.
Holyoke Catholic 65, St. Mary 37
Sam Thresher (20 points) and Drew Collins (8) led St. Mary.
GIRLS’ HOOPS
Chicopee 50, Westfield 45 (OT)
Westfield suffered a tough loss on the road. The Bombers return to action Tuesday on senior night at home against Sabis. Tip-off is at 7.