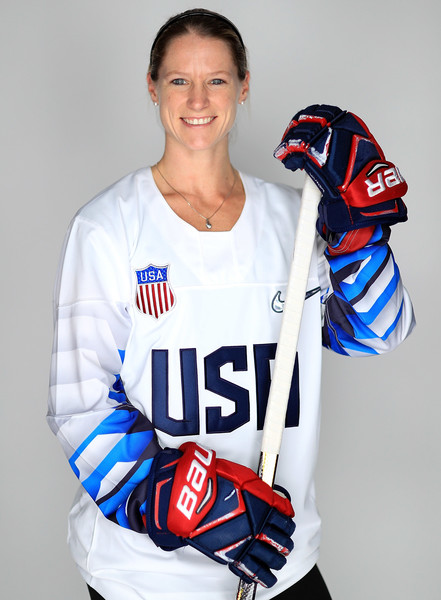 WESTFIELD – A celebration of Olympic-sized proportions is coming to the Whip City.
On Wed., Feb. 7, the Longmeadow Lancers (WHS Co-Op) will welcome the Auburn Rockets at Amelia Park Ice Arena at 6:30 p.m. for a highly-anticipated high school girls ice hockey game that is being labeled a “free Olympic Spirit Night”.
The Olympic celebration will support the achievements of Westfield’s own Kacey Bellamy, who is playing on the USA Women’s Ice Hockey Team in the 2018 Winter Olympics, as well as showcase the talent of high school girls ice hockey. 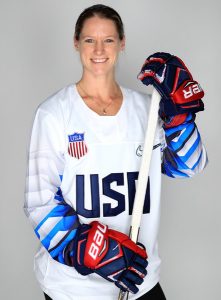 “It’s going to be a celebration of women’s hockey,” said Brian Barnes, Amelia Park executive director. “The mayor wanted to do something and Lindsey Bellamy, Kacey’s sister, made a big push for the event.”
Barnes and Lindsey both think it’s a rare and amazing thing to have somebody from your home town make it to the Olympics.
“It’s very important for us, when one of our community members is doing something good, to support them,” said Barnes. “Going to the Olympics is not a small thing and is something to be really proud of.”
Lindsey went on to say that having people from the area support her sister makes it all that more special, and that it can have an impact on the younger girls playing in the game or attending the event.
“There are so many special little girls all over the world that dream about becoming an Olympic athlete,” said Lindsey. “My sister had a dream and she went after it with hard work, determination and love for the game. Some of these girls can look up to that and hopefully this helps to get more interest in girl’s hockey games.”
Barnes echoed her statement about raising awareness of women’s hockey and hopes that seeing what Kacey has accomplished is encouraging for the young players.
“Something like this is a good catalyst that says, hey this is kind of important,” said Barnes.” We have a lot of girls that are interested in this and that’s kind of the purpose of doing these two events together. Let’s take this moment to recognize women’s hockey and see where it is and support it. We’d like to see the programs grow.” 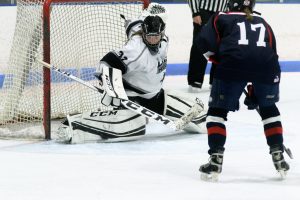 Longmeadow goalie Kayla Brown makes the save on a point blank shot Saturday against Medway. (Photo by Bill Deren)

Melissa Vandermyn, the head coach for the Longmeadow Lancers girls co-op ice hockey team, said the number of girls trying out for the team has almost doubled over the last few years and they are hoping to keep raising interest of the program.
“The more we get the name out, the more the girls have something to look forward to,” said Vandermyn. “We’re excited, and Auburn is excited. These girls have a unique opportunity to play for a public school team. I know there are a lot of local girls interested in playing.”
Vandermyn thinks that Kacey Bellamy is a great role model for aspiring hockey players, largely because of the hard work she put in throughout in her career.
“Kacey grew up playing in the same area and in the same programs as these girls,” said Vandermyn. “That puts everything intro perspective. Having somebody local make it to the Olympics makes it not so farfetched for the girls to dream about.”
Barnes, Lindsey, and Vandermyn all expressed high hopes for the event and said it can be very motivational for young people.
“The ideal turnout would be if we can fill the stands,” said Barnes. “If we can get about 600 people in the arena to show support, that would be awesome. If people stay and watch the whole game to support these young ladies and just take away an awareness factor from it, that’d be a win-win.”
The first 100 guests to the event will receive a free Kacey Bellamy T-shirt. There will also be a video played that was recorded by Kacey before she left.