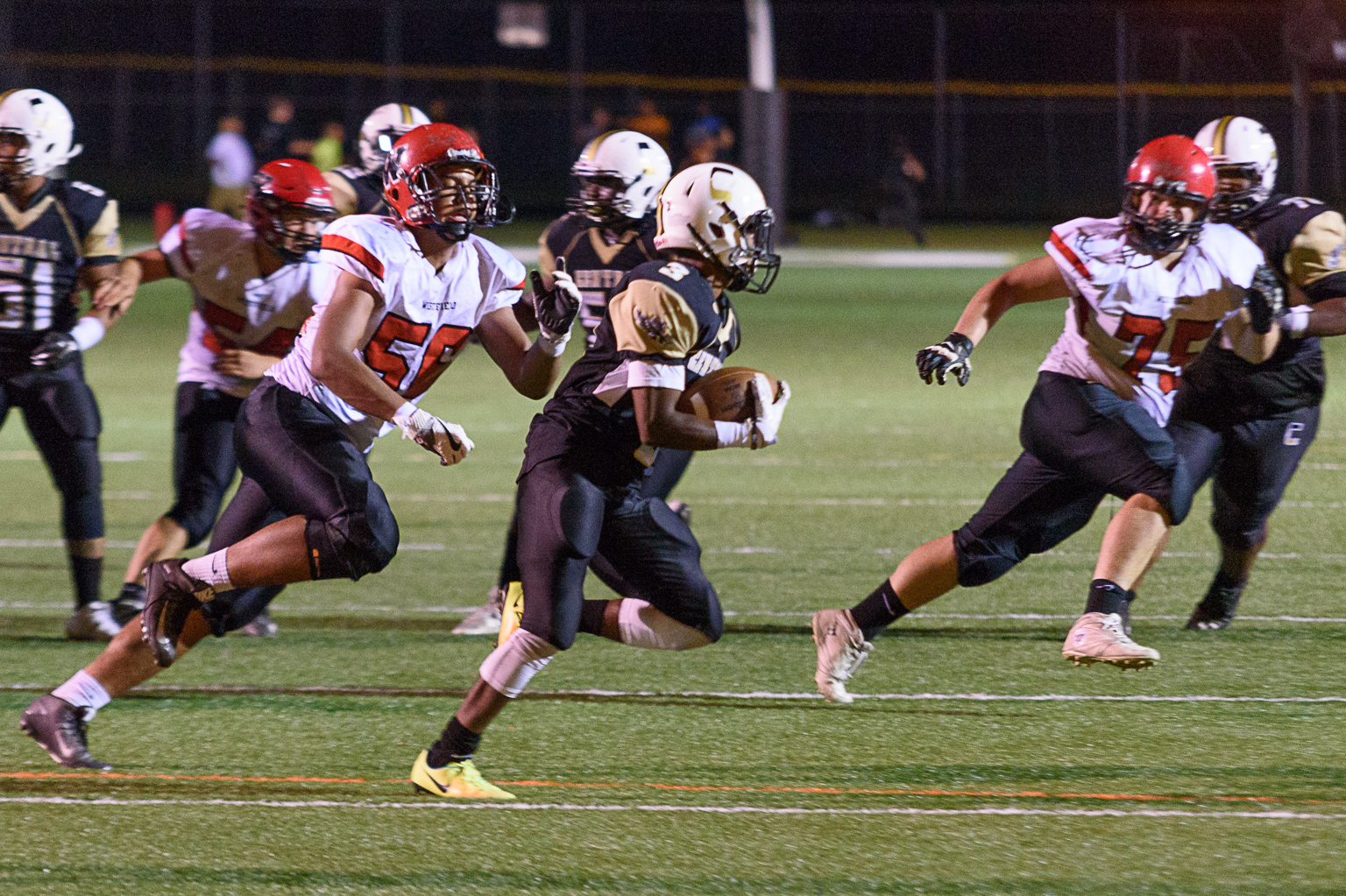 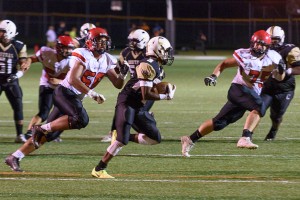 SPRINGFIELD – In Greek mythology, everything that King Midas touch turned to gold. Well, on Friday night, nearly every time senior running back De’Andre Goldson touched the ball for the Central High School football team, it resulted in a Golden Eagles’ touchdown.
Goldson scored on four of his five touches out of the backfield, and the Central Golden Eagles went on to stun the previously unbeaten Westfield Bombers, 39-6, Friday night.
Goldson carried the ball five times for 153 yards and four touchdowns.
The home team wasted no time in scoring,
Central (2-1) took a botched opening kickoff all the way to the Westfield 26-yard line. Golden Eagles senior quarterback Eriziah Walker found sophomore wide out Myles Bradley on a short pass on the first play from the line of scrimmage. Bradley took the ball 34 yards and scored 34 seconds into the game for a 6-0 lead.
Westfield (2-1) went 3-and-out on its next series.
In the blink of an eye, Central made it 13-0. Once again, the Panthers scored on their first play of a series when senior Goldson took the ball 47 yards up the middle for a touchdown with 9:22 remaining in the opening quarter.
After both teams exchanged scoreless possessions, Westfield put together a nice drive before turning the ball over on a fumble just before entering the red zone on the Central 20-yard line in the waning minutes of the quarter.
Westfield then made what appeared at first to be a nice stop on third down on the ensuing drive, forcing the quarterback into an errant pitch in the backfield. The ball deflected high off the fingers of Goldson’s outstretched hands a few yards behind the line of scrimmage but the running back scooped up the ball, bounced to the outside and raced 72 yards for a touchdown, his second of the game.
After the score and extra point, which came with 45 ticks remaining in the quarter, Central led 20-0.
The gold rush reappeared in the second quarter.
After Westfield suffered its second turnover of the game, another fumble, early in the second quarter, Central drove 40 yards in five plays. The drive culminated in a 27-yard touchdown run from Goldson with 7:26 left in the half.
Westfield threatened to score late in the half, marching into the red zone before a Goldson sack knocked the Bombers all the way back to the Central 23-yard line. The first half clock expired when a fourth down pass went awry.
Westfield did not fare much better in the second half. The Bombers’ first drive of the half stalled near midfield. Again, Central moved the ball with ease. The Golden Eagles’ lightning-quick offense drove 85 yards in less than two minutes, scoring on a 19 yard TD pass from Walker to sophomore Tyvarius Daniels with 7:55 left in the third quarter to make it 33-0.
The rest was – as so often is said – history.
Goldson padded his stats in the third quarter with a five-yard touchdown run.
Westfield senior quarterback Austin St. Pierre scored on a fourth-and-inches plunge late in the fourth, the Bombers only points of the game.

GOLF
Longhi leads Rams again
Southwick 16.5, Granby 7.5
Southwick improved to 6-1 overall, 4-0 league by winning the second of seven straight road matches. James Longhi finished with his sixth round in the 30s, shooting a 1-over 37 at Mill Valley.
Southwick, which will hit the road next week for three matches, will play five of its final six matches at home. Longhi will lead the Rams to the PVIAC Individual Golf Championships Oct. 7 in Southampton.