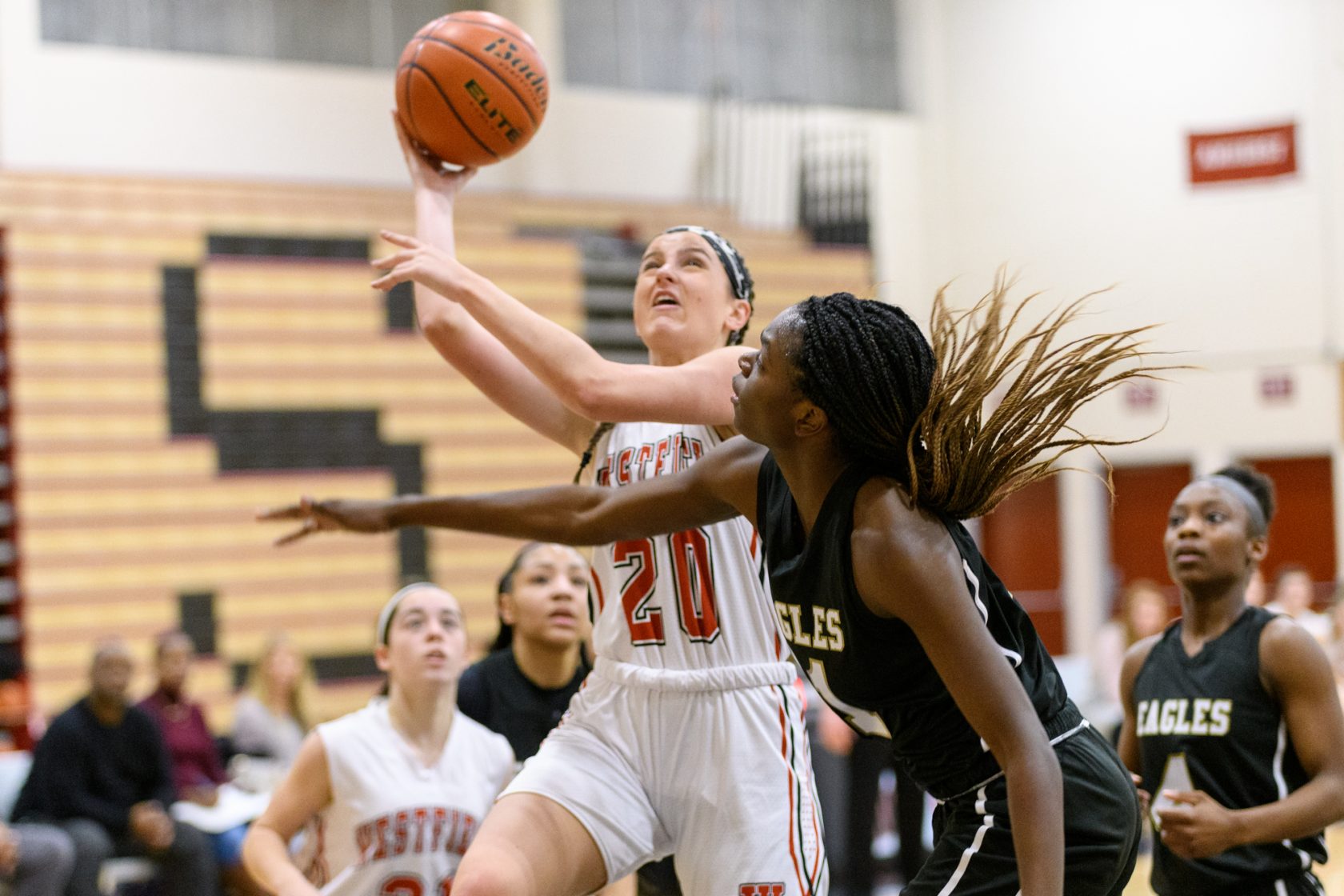 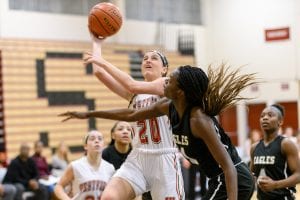 WESTFIELD – It took four games, but it looks like the Westfield High School girls basketball team finally met its match.
Central snapped Westfield’s three-game win streak to begin the 2018-19 regular season, knocking the Bombers back 72-27 Tuesday night in the Whip City.
Jaliena Sanchez led Central with 22 points, and Alecia Maxwell and Naelani Long finished with 16 and 14, respectively, as the Golden Eagles produced three players in double-digits.
Westfield’s Emma Pedolzky scored a team-high 10 points, eight of which came in the third quarter. Kaela Mochak, who on Monday night was voted The Westfield News MVP of the week, following a tremendous opening week, was held to just three points against Central.
Central swarmed the ball every time Westfield went on the attack, applying a suffocating defensive effort. The Golden Eagles opened the game with a 15-0 run, and really never looked back.
Westfield finally got on the scoreboard in the waning minutes of the first quarter. Chandler Pedolzky scored the Bombers’ first points of the game with about 2:30 left in the quarter on a nice inbounds pass from Olivia Hadla. Hadla then scored off a steal.
Westfield kept within shouting distance until Central ripped off a 24-5 run in the second quarter to pull away. The Bombers put together two 5-0 runs in the second half – both came in the third quarter – thanks in large part to a spark from Emma Pedolzky, but it was all they could muster.
Westfield will attempt to bounce back Friday night at Longmeadow High School. Tip-off is at 7 p.m.

BOYS SWIMMING
WHS stomps Comp
Westfield 123, Chicopee Comp 62
Westfield more than earned its just reward – a break until after the holiday season – with its fourth win in four meets.
Tommy Russell and Jack Beaulieu led the way for Westfield.
Russell posted winning times in the 100 free (51.59) and 100 backstroke (state qualifying 54.59); Beaulieu took home first in the 50 free (24.31) and 100 fly (58.98).
Matt Morash (200 IM, 2:16.16), Kevin Hayes (diving, 206.45), Cole Viamari (500 free, 5:42.59), and Dominic Navarrete (100 breaststroke, 1:10.30) each won one event for Westfield.
The 100 breaststroke proved to be the most captivating competition of the meet as Navarrete slipped past Chicopee Comp’s Evan Nawrocki by 1/100th of a second, and touching out fellow Westfield teammate Patrick Lurgio (1:11.22) as all three swimmers came to the wall at the same time.
All three Bombers’ relay teams – the 200 medley (Russell, Lurgio, Beaulieu, Morash), 200 free (Morash, Beaulieu, Viamari, Navarrete), and 400 free (Viamari, Lurgio, Navarrete, Russell) – proved victorious.
“We had some very, very good swims,” Westfield swim coach Tom Lewis said. “We’re looking forward to getting a couple of good weeks of training in now before New Year’s.”
The Westfield swimming and diving team returns to action Fri., Jan. 4 at Agawam.